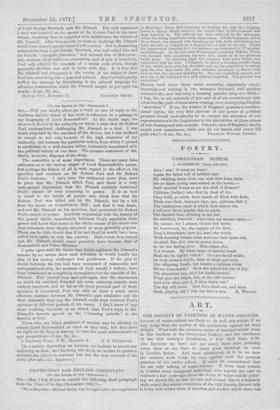 PROTECTION FOR ENGLISH CHRISTIANS. CT° THE Enrrou OF TEM "SrEmeron.1

'Stn,—May I beg of you to reprint the following short paragraph from the Times of to-day (December 18th) 'WIFE-BHATERS.—Michaal Scully was brought before the magistrates at Blackburn Town Hall yesterday for kicking his wife in a lodging- house in Queen Street, whereby the frontal bone of the forehead had been knocked in. The sufferer has boon removed to the infirmary, where her dying depositions have been taken. Alfred Cummins, tailor, Moor Street, was charged with knocking his wife down and kicking her head and face so violently as to deprive hor of sight in one eye. Under the Aggravated Assaults Act, the prisoner was sentenced to 12 months' imprisonment. At the Leicester Police-court yesterday William White was charged with assaulting his wife with intent to do her grievous bodily harm. On Saturday night the prisoner went home drunk, and quarrelled with his wife, 'Ultimately he throw a burning paraffin lamp at her, which broke over her shoulder, and on the neighbours breaking open the door they found the poor creature enveloped in flames from head to foot, the prisoner standing by. She was frightfully injured, and now lies at the infirmary in a very critical condition. The prisoner was remanded."

Having read these three cases, occurring apparently simul- taneously—of kicking in one woman's forehead, and another woman's eye, and throwing a burning paraffin lamp at a third— I beg, Sir, to ask solemnly of you and of all my countrymen with whom lies the guilt of these never-ceasing, ever-multiplying English "atrocities "? if we, the women of England, possessed conetitu- Venal rights, the very first exercise of our power of political pressure would undoubtedly be to compel the attention of our representatives in the Legislature to the prevention of these crimes of wife-beating and wife-murder. Can you, men of England, wholly acquit your consciences, while you tie our hands, and never lift