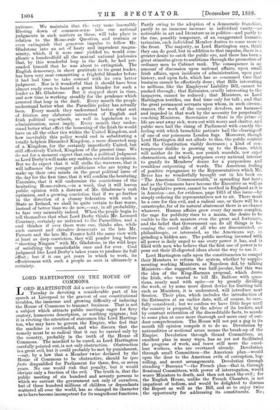 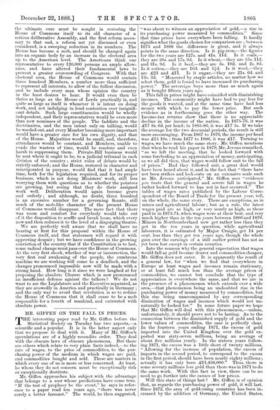 LORD HARTINGTON ON THE HOUSE Or COMMONS.

TORD HARTINGTON did a service to the country on I Tuesday in devoting a considerable part of his speech at Liverpool to the gravest of our constitutional troubles, the immense and, growing difficulty of inducing the House of Commons to transact business. That is not a subject which attracts public meetings eager for fiery oratory, humorous description, or scathing epigram ; but it is riveting the attention of statesmen like Lord Harting- ton, who may have to govern the Empire, who feel that the machine is overloaded, and who discern that the remedy must be so radical that it can be carried only by the country, probably in the teeth of the House of 'Commons. The mischief to be cured, as Lord Hartington ,carefully pointed out, is not only obstruction. Obstruction is a great evil, but it could probably be met by punishment, —say, by a law that a Member twice declared by the House of Commons to be obstructive, should be ipso facto disqualified for Parliament for three, five, or seven years. No one would risk that penalty, but it would obviate only a fraction of the evil. The truth is, that the public meeting of six hundred and seventy persons to which we entrust the government not only of ourselves, but of three hundred millions of children or dependants scattered all over the world, has so changed. its character as to have become incompetent for its magnificent functions. Partly owing to the adoption of a democratic franchise, partly to an immense increase in individual vanity—as noticeable in art and literature as in politics—and partly to the rise, possibly temporary, of an exaggerated humani- tarianism, each individual Member desires to come more to the front. The majority, as Lord Hartington says, think they can do good, but in addition to that impulse, there is a greater desire to catch the public eye, and there has been a great stimulus given to ambitions through the promotion of ordinary men to Cabinet rank. The consequence is an amount of discussion upon national affairs, upon small Irish affairs, upon incidents of administration, upon past history, and upon fads, which has so consumed time that business cannot be effectively done ; that Bills interesting to millions, like the Employers' Liability Bill, cannot be pushed through ; that Estimates, cruelly interesting to the taxpayers, cannot be reduced ; that Ministers, as Lord Hartington testifies, can find time only for talk ; and that the great permanent servants upon whom, in such circum- stances, the work of the country devolves, are harassed and impeded in that work by the necessity for perpetually coaching Ministers. Secretaries of State in the prime of life are sent away sick, worn out with worry and chatter, and public men hail the rising of Parliament with exactly the feeling with which bronchitic patients hail the clearing-off of one of our poisonous London fogs. Moreover, though Lord Hartington did not allude to this, the public content with the Constitution visibly decreases ; a kind of con- temptuous dislike is growing up to the House, which will neither do its work, nor punish scandals, nor expel obstructives, and which postpones every national interest to gratify its Members' desire for a purposeless and resultless outpouring of words. The American feeling of positive repugnance to the Representatives which Mr. Bryce has so wonderfully brought out in his book on "The American Commonwealth," is spreading fast here ; and as the Commons have become the Executive as well as the Legislative power, cannot be soothed in England as it is in America—see, for evidence, page 1815 of this issue—by simply ordering the representatives not to sit. There must be a cure for this evil, and a radical one, or there will be a catastrophe, for of its natural abatement there is no chance whatever. Human affairs grow every day more complex, the rage for publicity rises to a mania, the desire to be visible to the mob masters even the great and fortunate, and the belief that Government can do all things is be- coming the creed alike of all who are discontented, or philanthropic, or interested, as the Americans say, in grinding a hidden axe. The public meeting invested with all power is daily urged to use every power it has, and is filled with men who believe that the first use of power is to pour out their ill-digested ideas about the way to use it.

Lord Hartington calls upon the constituencies to compel their Members to reform the system, whether by supple- menting working Ministers, as Napoleon did, by talking Ministers—the suggestion was half-jocular, but this was the idea of the King-Harman proposal, which drove the Irish, who wanted to kill Mr. Balfour with ques- tions, nearly mad with spite—or by greatly dividing the work, or by some more direct device for limiting talk such as Ministers, it is understood, will introduce next Session. Their plan, which includes the introduction of the Estimates at an earlier date, will, of course, be care- fully considered ; but we confess we have little hope until the country is prepared, by the advice of its leaders, and by constant reiteration of the discreditable facts, to accede to some plan at once more thorough and more easy of out- door comprehension. The House will not put a gag in its mouth till opinion compels it to do so. Devolution by nationalities or sectional areas means the break-up of the Empire. Devolution through Grand Committees, an excellent plan in many ways, has as yet not facilitated the progress of work, and taxes still more the excel- lent workers, who are overtaxed already. Devolution through small Committees—the American plan—would open the door to the American evils of corruption, log- rolling, and secret arrangements. Devolution through standing "Bureaux "—the French plan—that is, through Sessional Committees, with power of interrogation, would worry Ministers to death, and then not meet the evil ; for the English House, unlike the French Chamber, is not impatient of tedium, and would be delighted to discuss the Report as well as the Bill, and so to enjoy twice the opportunity for addressing its constituents. No; the ultimate cure must be sought in restoring the House of Commons itself to its old character of a serious deliberative Assembly, and the first reform neces- sary to that end, a reform not yet discussed or even considered, is a sweeping reduction in its numbers. The House has become a mob, and should be changed again into an organic body by an increase in the electoral area up to the American level. The Americans think one representative to every 120,000 persons an ample allow- ance, and have altered their fundamental laws to prevent a greater overcrowding of Congress. With that electoral area, the House of Commons would contain three hundred Members, a number more than sufficient to represent all interests, to allow of the fullest discussion, and to include every man whose opinion the country in the least desires to hear. It would even then be thrice as large as the House of Lords practically is, and quite as large as itself is whenever it is intent on doing work, and not indulging in loud contention over insignifi- cant details. Such large constituencies would be wholly independent, and their representatives would be even more than now nominees of the people. The faddists and the doctrinaires, and the men intent only on talking, would be weeded out, and every Member becoming more important would have a greater care for his own dignity, and that of the House. Majorities would be small, and, therefore, attendances would be constant, and Members, unable to evade the wasters of time, would be resolute and even harsh in suppressing them. Private-Bill business would be sent where it ought to be, to a judicial tribunal in each division of the country ; strict rules of debate would be strictly enforced; and the House, restored in character and reinvigorated in purpose, would find that it had ample time, both for the legislation required, and for its proper business, which is not doing Ministers' work, still less worrying them with questions as to whether the potatoes are growing, but seeing that they do their assigned work well. Deliberation would. again become grave and orderly ; and although, no doubt, three hundred is an excessive number for a governing Senate, still much of the mob-like character of the present House of Commons would disappear. The mere fact that there was room and comfort for everybody would take out of it the disposition to scuffle and break loose, which every now and then reduces it to the level of a disgorging theatre. We are perfectly well aware that we shall have no hearing at first for this proposal within the House of Commons itself, and that statesmen will regard it with approving despair ; but we have confidence in the growing conviction of the country that if the Constitution is to last, some radical change must pass over the House of Commons.

At the very first shock, whether of war or insurrection, the very first real awakening of the people, the cumbrous machine we are working will come to a deadlock, and the changes pronounced impossible now will be made with a strong hand. How long is it since we were laughed at for proposing the absolute Closure which is now pronounced an insufficient defence against the talkers ? We do not want to see the Legislature and the Executive separated, as they are avowedly in America and practically in Germany ; and the only way to avoid that revolution is so to reduce the House of Commons that it shall cease to be a mob responsible for a fourth of mankind, and entrusted with absolute power.