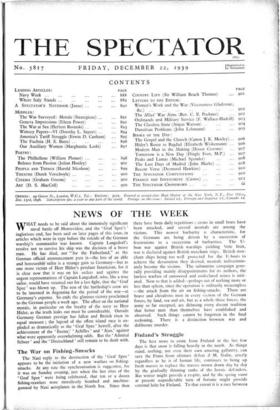 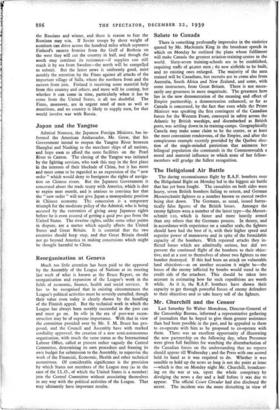 The best news to come from Finland in the last few days is that snow is falling heavily in the north. As things stand, nothing, not even their own amazing gallantry, can save the Finns from ultimate defeat if M. Stalin, utterly regardless as he is of human life, continues to bring up fresh masses to replace the masses mown down day by day by the gradually thinning ranks of the heroic defenders. But winter might provide a respite, and by the spring some at present unpredictable turn of fortune might provide external help for Finland. To that extent it is a race between the Russians and winter, and there is reason to fear the Russians may win. If Soviet troops by sheer weight of numbers can drive across the hundred miles which separates Finland's eastern frontier from the Gulf of Bothnia on the west they will cut the country in half, and though the south may continue its resistance—if supplies can still reach it by sea from Sweden—the north will be compelled to submit. But the latest news is uniformly good, most notably the retention by the Finns against all attacks of the important village of Salla, where the northern front and the eastern front join. Finland is receiving some material help from this country and others, and more will be coming, but whether it can come in time, particularly when it has to come from the United States, is all too doubtful. The Finns, moreover, are in urgent need of men as well as munitions, and no country is likely to supply men, for that would involve war with Russia.