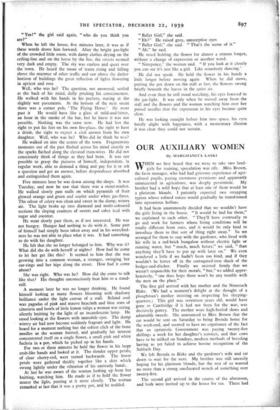 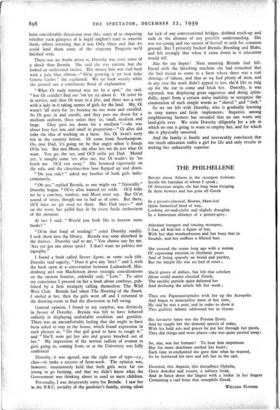 \AT HEN we first heard that we were to take two land- girls for training, speculation was rife. Miss Brown, the farm manager, who had had grievous experience of agri- cultural pupils, paying enormous premiums and apparently uninterested in agriculture, was deeply pessimistic. My brother had a wild hope that at least one of them would be a platinum blonde. I patiently expected two strapping typists whose refined voices would gradually be transformed into uproarious holloas.

It had been unanimously decided that we wouldn't have the girls living in the house. " It would be bad for them," we explained to each other. " They'll have eventually to go and work for farmers whose living conditions will be totally different from ours, and it would be only kind to introduce them to that sort of thing right away." So we arranged for them to stay with the gardener, who lived with his wife in a red-brick bungalow without electric light or running water, but " much, much better," we said, " than anything they'll have to put up with later on." We even wondered a little if we hadn't been too kind, and if they wouldn't be better off in the corrugated-iron shack of the hedger-and-ditcher. Finally we insisted firmly that we weren't responsible for their morals, " but," we added appre- hensively, " one does hope there won't be any trouble with the men on the place."

The first girl arrived with her mother and the Nonesuch Blake. (We had a moment's delight at the thought of a ploughman's mother insisting on inspecting his sleeping- quarters.) This girl was seventeen years old, would have gone to Cambridge if it had not been for the war, was decisively gentry. The mother wore high-heeled shoes and admirable tweeds. She announced to Miss Brown that the car would be sent on Saturday to bring Brenda home for the week-end, and seemed to have no cognisance of the fact that an optimistic Government was paying twenty-five shillings a week for her daughter's services, and that cows have to be milked on Sundays, modern methods of breeding having as yet failed to achieve bovine recognition of the Sabbath Day.

We left Brenda to Blake and the gardener's wife and sat down to wait for the next. My brother was still uneasily hoping for his platinum blonde, but the rest of us wanted no more than a strong uneducated wench of something over twenty-five.

The second girl arrived in the course of the afternoon, and both were invited up to the house for tea. There had been considerable discussion over this, some of us enquiring whether such glimpses of le higlif mightn't tend to unsettle them, others retorting that it was Only Once and that we could lend them some of the sixpenny Penguins we'd finished with.

There was no doubt about it, Dorothy was even more of a shock than Brenda. She said she was sixteen, but she looked an undersized twelve. Her mousy hair was tied back with a pale blue ribbon—" Oi'm growing it ter look loike Greeta Garbo " she explained. We sat back weakly while she poured out a continuous flood of explanation.

" What Oi reely wanted wus ter be a spoi," she said, " but Oi couldn't find out 'ow ter set about it. Oi uster be in service, and then Oi went to a fete, and there was a tent with a lady in it taking names of girls fer the land. My, Oi wusn't 'alf sorry for 'er, because no one went and enrolled. So Oi goes in and enrolls, and they puts me down for a medium uniform, three soizes they 'as, small, medium and large. They puts me down for a medium "—she was about four feet ten, and small in proportion—" Oi allus did loike the idea of working on a farm. No, Oi 'aven't reely bin in the country before. Oi come from Southampton. Oo, moi Dad, 'e's going ter be that angry when 'e foinds Oi'm 'ere. But moi Mum, she allus lets me do jest what Oi want. You go, she sez, and Oi'll settle yer Dad. Moind yer, 'e moight come 'ere after me, but Oi wudn't let 'im ketch me. Oi'd run away." She bounced vigorously on the sofa, and the chocolate-box bow flapped up and down.

" Do you ride? " asked my brother of both girls indis- criminately.

" Oh yes," replied Brenda, as one might say " Naturally." Dorothy began, " Oi've allus wanted ter roide. Oi'd loike ter be a cow-boy, tomboy, moi Mum uster say. But Oi'm scared of 'orses, though not so bad as of cows. But there, Oi'll have ter git used ter them. Moi Dad says—" and on she went, her pallid face lit by every facile enthusiasm of the moment.

At last I said, " Would you both like to borrow some books? "

" Oi'm that fond of reading! " cried Dorothy readily. I took them into the library. Brenda was soon absorbed in the shelves. Dorothy said to me, " You choose one fer me. 'Ave yer got one about spois? I don't want no politics nor jography."

I found a book called Secret Agent, or some such title. Dorothy said eagerly, " Does it give any 'ints? " and I, with the book open at a conversation between Ludendorff, Hin- denburg and von Mackensen about strategic considerations on the eastern frontier, unkindly said, " Lots." To salve my conscience I pressed on her a book about cowboys, pub- lished by a firm strangely calling themselves The Wild West Club. Brenda had taken The Hunting of the Snark. I smiled at her, then the girls went off and I returned to the drawing-room to find the discussion in full swing.

General opinion, I found to my surprise, was distinctly in favour of Dorothy. Brenda was felt to have behaved unfairly in displaying undeniable erudition and gentility. There was an uncomfortable feeling that she ought to have been asked to stay in the house, which found expression in such phrases as, " Do that girl good to have to rough it." and " She'll soon get her airs and graces knocked out of her." My impression of the normal sadism of women to girls going to, coming from, or at the University was fully confirmed Dorothy, it was agreed, was the right sort of type—i.e., class—to make a success of farm-work. The opinion was, however, unanimously held that both girls were far too young to go farming, and that we didn't know what the Government was thinking about to send us mere children.

Personally, I was desperately sorry for Brenda. I saw her in the B.B.C. joviality of the gardener's family, sitting silent for lack of any conversational bridges, dubbed stuck-up and rude in the absence of any possible understanding. She was too young and too unsure of herself to seek for common ground. But I privately backed Brenda, Breeding and Blake, and felt strongly that when it came down to it education would tell.

Alas for my hopes! Next morning Brenda had left. Faced with the threshing machine she had remarked that she had meant to come to a farm where there was a real shortage of labour, and that as we had plenty of men, and in any case the work didn't appeal to her, she'd like to ring up for the car to come and fetch her. Dorothy, it was reported, was displaying great eagerness and doing splen- didly, apart from a certain naïve inability to recognise the connotation of such simple words as " shovel " and " fork."

So we are left with Dorothy, who is gradually learning to snap names and farm implements. Inquiries among neighbouring farmers has revealed that no one wants any land-girls ever. We train Dorothy diligently for a job in which no one is going to want to employ her, and for which she is physically unsuited.

And the family is finally and irrevocably convinced that too much education unfits a girl for life and only results in making her unbearably superior.