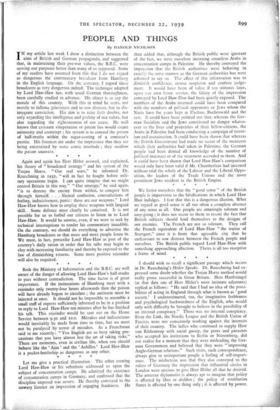 I should wish to recall a significant passage which occurs in Dr. Rauschning's Hitler Speaks. Dr. Rauschning had ex- pressed some doubt whether the Trojan Horse method would really prove successful in Great Britain. Herr Hanfstangel (at that date one of Herr Hitler's most intimate adjutants) replied as follows: " He said that I had no idea of the possi- bilities of acting in England through what is known as ' good society.' I underestimated, too, the imaginative feebleness and psychological backwardness of the English, who would only with difficulty be brought to believe in the possibility of an internal conspiracy." There was no internal conspiracy. Even the Link, the Nordic League and the British Union of Fascists were not consciously working against the interests of their country. The ladies who continued to supply Herr von Ribbentrop with social gossip, the peers and parasites who accepted his invitations to Berlin or Niiremberg, did not realise for a moment that they were misleading the Ger- man Government and believed that they were " improving Anglo-German relations." Such visits, such correspondence, always give to unimportant people a feeling of self-import- ance. The misfortune was that they also conveyed to the rulers of Germany the impression that influential circles in London were anxious to give Herr Hitler all that he desired. The amateur diplomatist is always apt to imagine that policy is affected by likes or dislikes ; the policy of totalitarian States is affected by one thing only ; it is affected by power.