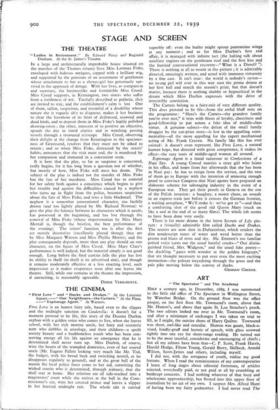 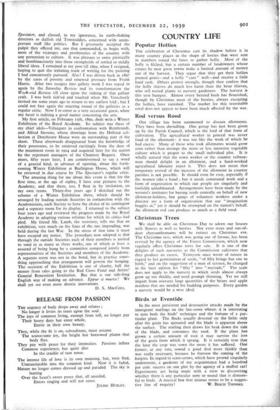 " The Spectator " and The Academy

HALF a century ago, in December, 1889, I was summoned to the little old office of The Spectator in Wellington Street, by Waterloo Bridge. On the ground floor was the office proper, on the first floor Mr. Townsend's room, above that Mr. Hutton's, and above that again St. Loe Strachey's perch. The two editors looked me over in Mr. Townsend's room, and after a minimum of exchanges I was taken on trial to fill, as I might, the outsize shoes of Harry Quilter. Townsend was short, owl-like and oracular. Hutton was gaunt, black-a- vised, kindly-gruff and laconic of speech, with glass screwed tightly into one eye for short-range reading. He turned out to be the most trustful, considerate and encouraging of chiefs ; but all my editors have been that—C. P. Scott, Frank Harris, Harold Hodge, Filson Young, Gerald Barry, Skilbeck, Arnold Wilson, Scott-James and others, including myself. I did not, with the arrogance of youth, realise my good fortune. When I read the reminiscences of my contemporaries I learn of long sieges about editorial fortresses, of articles rejected, wretchedly paid, or not paid at all by crumbling or bankrupt concerns. I had nothing whatever of that hard and wholesome apprenticeship, but floated into this upper floor of journalism by no act of my own. I suspect Mrs. Alfred Hunt of having been my fairy godmother. I had never read The Spectator, and classed, in my ignorance, its earth-shaking directors as dullish old Tomnoddies, concerned with unim- portant stuff like politics. But I graciously accepted the pulpit they offered me, one that commanded, to begin with, most of the vicarages and presbyteries of the country with any pretension to culture. It was pleasant to enter piratically and bombinaciously into those strongholds of settled or mildly liberal ideas. I remained at my post till 1895, when I resigned, hoping to quit the irritating trade of writing for the painting I had concurrently pursued. Alas! I was driven back in 1897 by the cares of poverty and renewed pressure from Frank Harris. After two escapes into gallery work I was roped in again by the Saturday Review and its transformation the Week-end Review till close upon the sinking of that gallant craft.. I was both ticleed and touched when Mr. Verschoyle invited me some years ago to return to my earliest fold ; but I could not face again the exacting round of the galleries as a regular critic. Now I re-enter as a very occasional guest, when my heart is inditing a good matter concerning the arts.

My first article, on February z5th, 189o, dealt with a Winter Exhibition of the Royal Academy. Its subject was three of my chief idols—Velazquez in confrontation with Rembrandt, and Alfred Stevens, whose drawings from the Holford col- lection at Dorchester House were an outstanding part of the show. These afterwards disappeared from the knowledge of their possessors, to be retrieved excitingly from the dust of the muniment room in 1914 and acquired later for the nation by the repentant managers of the Chantrey Bequest. Once more, fifty years later, I am commissioned to say a word of a general kind, in advance of opening, about the forth- coming Winter Exhibition at Burlington House, which will be reviewed in due course by The Spectator's regular critic.

The amusing thing for me about this event is that for the first time, at the age of eighty, I have sent pictures to the Academy, and that there, too, I float in by invitation, on my own terms. Thirty-five years ago I sketched out the scheme of a Winter Exhibition there, which should be arranged by leading outside Societies in conjunction with the Academicians, each Society to have the choice of its contingent and a separate room for its display. I returned to the subject four years ago and reviewed the progress made by the Royal Academy in adopting various reforms for which its critics had pled. My friend Mr. Lamb, the secretary, tells me that an exhibition, very much on the lines of the one impending, was held during the last War. In the stress of that time it must have escaped my notice. The procedure now adopted is that through the outside Societies each of their members is invited to send in as many as three works, one of which at least is assured of being hung by a committee composed jointly from representatives of the Societies and members of the Academy. A separate room was not in the bond, but in practice some- thing approaching that arrangement will govern the hanging. The occasion of the Exhibition is one of charity, half the money from sales going to the Red Cross Fund and Artists' General Benevolent Institution. But that is our side-long English way of making an advance. Eppur si muove! We shall yet see even more drastic innovations.