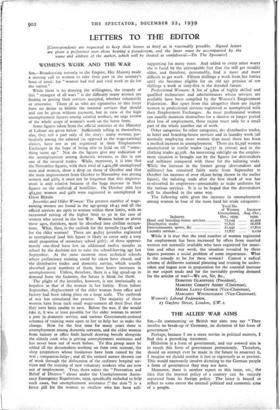 [Correspondents are requested to keep their letters as brief as is reasonably possible. Signed letters are given a preference over those bearing a pseudonym, and the latter must be accompanied by the name and address of the author, which will be treated as confidential.—ED. The Spectator]

WOMEN'S WORK AND THE WAR

SIR,—Broadcasting recently to the Empire, Her Majesty made a moving call to women to take their part in the country's hour of need : for " women had real and vital work to do for the nation."

While there is no denying the willingness, the tragedy of this " strangest of all wars " is the difficulty many women are finding in getting their services accepted, whether voluntarily or otherwise. Those of us who are signatories to this letter have no desire to belittle the national services that should and can be given without payment, but in view of the high unemployment figures among salaried workers, we urge review of the whole scope of women's work on the home front. Some figures taken from the official statistics of the Ministry of Labour are given below. Sufficiently telling in themselves, alas, they tell a part only of the story : many women, par- ticularly among the salaried (as opposed to the wage-earning) classes, have not as yet registered at their Employment Exchanges in the hope of being able to hold on till " some- thing turns up." Nor do the figures give any indication of the unemployment among domestic servants, as this is not one of the insured trades. While, moreover, it is true that the November figures, with their total of 1,402,588 unemployed men and women, show a drop on those of October and that the main improvement from October to November was among women and girls, it must not be forgotten that this improve- ment is only relative because of the huge increase in their figures on the outbreak of hostilities. On October 16th last 483,591 women and girls were registered as unemployed in Great Britain.

Juveniles and Older Women: The greatest number of wage- earning women are found in the age-group 18-43 and all the official services are open to women within these limits, with an occasional raising of the higher limit to so in the case of women who served in the last War. Women below or above these ages, therefore, must be absorbed into civilian occupa- tions. What, then, is the outlook for the juvenile (14-18) and for the older woman? There are 49,825 juveniles registered as unemployed (and this figure is likely to cover only a very small proportion of secondary school girls): of these approxi- mately one-third have lost an additional twelve months at school by the decision not to raise the school-leaving age last September. At the same moment most technical schools where preliminary training could be taken have closed, and the distributive trades and domestic service, which usually absorbed great numbers of them, have heavy increases in unemployment. Unless, therefore, there is a big speed-up in demand from the factories, the future is bleak for them.

The plight of the juveniles, however, is not intrinsically as hopeless as that of the woman in her forties. Even before September, displacement of the older woman from office and factory had been taking place on a large scale. The outbreak of war has stimulated the process. The majority of these women have been such small wage-earners all their lives that they have been unable to save. Before the war, if she would take it, it was at least possible for the older woman to secure a post in domestic service, and various Government-assisted schemes of training were open to her to help her to make the change. Now for the first time for many years there is unemployment among domestic servants, and the older woman from factory or office finds herself drawing benefit alongside the elderly cook who is getting unemployment assistance and has never been out of work before. To this group must be added all the dressmakers working on their own account, the shop proprietors whose businesses have been ruined by the war ; companion-helps ; and all the trained nurses thrown out of work through the dislocation of the ordinary hospital ser- vices and the training of new voluntary workers who are now out of employment. True, there exists the " Prevention and Relief of Distress " clause under the Unemployment Assist- ancy Emergency Regulations, 1939, specifically included to help such cases, but unemployment assistance (" the dole ") is a bitter pill for the woman to swallow who has been self-

supporting for many years. And added to every other worry she is faced by the unescapable fact that she will get steadily older, and therefore, presumably, find it more and more difficult to get work. Fifteen shillings a week from her forties until she becomes eligible for an old age pension of ten

shillings a week at sixty-five is the dreaded future. Professional Women: A list of 5,80o of highly skilled and qualified technicians and administrators whose services are available have been compiled by the Women's Employment Federation. But apart from this altogether there are 10,156

women in professional services registered as unemployed with their Employment Exchanges. As most professional women can usually maintain themselves for a shorter or longer period after loss of employment, these io,000 must only be a small part of the whole number out of work.

in hotel and boarding-house services and in laundry work. (all normally employing more women than men) there has been a marked increase in unemployment. There are 61,598 women unemployed in textile trades (24,737 in cotton) and in .the clothing trades 42,528. An interesting sidelight on the employ- ment situation is brought out by the figures for dressmakers and milliners compared with those for the tailoring trade.

While the increase in the former group (dressmakers and milliners) has remained fairly static from September to October (an increase of over 18,0oo being shown in the earlier figure), the tailoring trade after the first shock of war has re-absorbed its employees—presumably to make uniforms for the various services. It is to be hoped that the dressmakers will be absorbed in the same way.

The following table gives the increase in unemployment among women in four of the most hard hit trade categories : Total No.

While it is true that the total number of women registered for employment has been increased by offers from married women not normally available who have registered for muni- tion and other war work, the situation revealed by these figures presents a social problem of some importance. What is the remedy to be for these women? Cannot a radical scheme of deliberate national planning and training be under- taken and begun now in preparation for the essential increase in our export trade and for the inevitably growing demand for the articles of war?—We are, Sir, &c.,