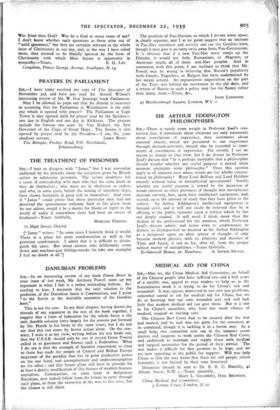 Snt,—In an interesting review of my book Down River in your issue of last week, Mr. Anthony Powell sums up my argument in what I feel is a rather misleading fashion. Ac- cording to him, I maintain that the only solution to the problems of the Danubian basin is Communism, and I point " to the Soviet as the desirable anatomist of the Gordian knot."

This is not the case. In my final chapter, having drawn the threads of my argument in the rest of the book together, I suggest that a form of federation for the whole basin is the only durable solution (very largely for the reasons put forward by Mr. Hayek in his letter in the same issue), but I do not say that this can come by Soviet action alone. On the con- trary, I state it as my view, writing before the war broke out, that the U.S.S.R. should only be one of several Great Powers called in to guarantee and finance such a Federation. What I do say is that the example of Socialist experiment so close to them has made the people of Central and Balkan Europe impatient of the paradox that lies in great productive power on the one hand, and unemployment and underconsumption on the other ; and that future plans will have to provide for at least a drastic modification of this feature of modern finance- capitalism. Communism, or some form of indigenous Socialism, may indeed follow from the failure to carry through such plans, or from the extension of the war to this area ; but the chance is still there.

The problem of Pan-Slavism, to which I devote some space, is clearly separate, and I at no point suggest that an increase in Pan-Slav sentiment and activity can cut the Gordian knot, though it may give it an extra twist away from Pan-Germanism. It is obvious that if a new Pan-Slav wave swept up the Danube, it would not help Rumanians, or Magyars, or Austrians much, all of them non-Slav peoples. And in connexion with this point, I am inclined to think that Mr. Powell may be wrong in believing that Russia's popularity with Czechs, Yugoslays, or Bulgars has been undermined by her recent actions. An expansionist imperialism on the part of the Tsars was behind the movement in the old days, and a return of Russia to such a policy may fan the flames rather than damp them.—Yours, &c., JOHN LEHMANN.