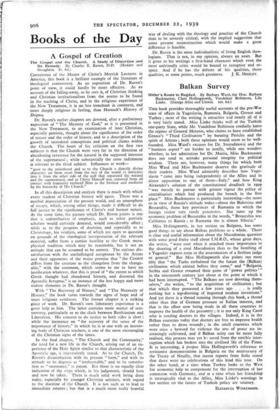 Hitler's Route to Bagdad. By Barbara Ward, the Hon. Barbara Buckmaster, Clare Hollingworth, Vandeleur Robinson, Lilo Linke. (George Allen and Unwin. tos. 6d.) THIS book provides thoroughly useful accounts of the pre-War state of affairs in Yugoslavia, Rumania, Bulgaria, Greece and Turkey ; most of the writing is attractive and nearly all of it is very fairly stated. Miss Linke thinks well of the Turkish one-party State, while Mr. Vandeleur Robinson cordially hates the regime of General Metaxas, who claims to have established Greece's " Third Civilisation " by banning Pericles and the spirit of Athens ; both these opinions would seem to be well- founded. Miss Ward's excuses for Dr. Stoyadinovie and the " business aspect " are harder to justify, while one wonders whether, in her admiration for Dr. Maniu, Miss Buckmaster does not tend to mistake personal integrity for political wisdom. There are, however, many things for which both Miss Ward and Miss Buckmaster deserve the gratitude of their readers. Miss Ward admirably describes how Yugo- slavia " came into being independently of the Allies and in direct opposition to one of them—Italy," and how King Alexander's solution of the constitutional deadlock in. 1929 " was merely to pursue with greater vigour the policy of centralisation which had produced the breach in the first place." Miss Buckmaster is particularly interesting—the more so in view of Russia's attitude today—about the Bukovina and Bessarabia, those key provinces of Rumania to which the foreign visitor very rarely penetrates. She sums up the economic problem of Bessarabia in the words, " Bessarabia was California to Russia ; to Rumania she is almost Siberia."

Miss Hollingworth, in her section on Bulgaria, has some good things to say about Balkan problems as a whole. There is clear and useful information about the Macedonian question with some good fruity stuff about I.M.R.O., whose great days, she writes, " were over when it attached more importance to the shooting of a rival Macedonian than to the bombing of a Yugoslav express train or the assassination of a Serbian judge or general." But Miss Hollingworth also points out most ably that " the Turks embalmed for the future the (Balkan) civilisation which existed before they came," and " Bulgaria, Serbia and Greece resumed their game of ' power politics " in the nineteenth century just about at the point at which it had been interrupted. " The Balkans are now devoting them- selves," she writes, " to the acquisition of civilisation ; but that which they possessed a few years ago . . . is really nothing but a top-dressing of imported modern inventions." And yet there is a thread running through this book, a thread other than that of German pressure or Italian interest, and that is the effort now being made in all these countries to improve the health of the peasantry ; it is not only King Carol who is sending doctors to the villages. Indeed, it is in the Balkan countries today that doctors are free to improve health rather than to dress wounds ; in the small countries which were once a byword for violence the arts of peace are in- creasingly cultivated, and if Balkan unity can be more fully realised, this process may yet ly.t saved from the terrible inter- ruption which has broken into the civilised life of the Finns. It is interesting, a propos Miss Hollingworth's reference to revisionist demonstrations in Bulgaria on the anniversary of the Treaty of Neuilly, that recent reports from Sofia stated that there were no celebrations of this kind this year. On the other hand, at a time when Turkey looks to the West for economic help to compensate for the interruption of her commerce with Germany, and at a time when her friendship is strategically vital to the Allies, Miss Linke's warnings in her section on the future of Turkish policy are salutary.