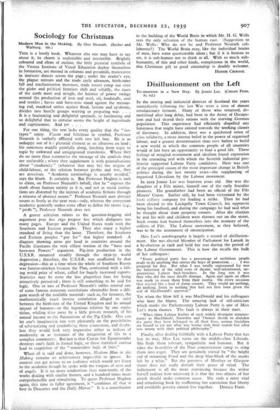 THIS is a lovely book. Whatever else one may have to say about it, its charm is undeniable and irresistible. Brightly coloured and dean of outline, the little pictorial symbols of the Vienna Institute of Visual Education deploy themselves in formation, are massed in columns and pyramids, manoeuvre in intricate dances across the page ; under the reader's eye, the plague retreats and the trade cycle advances, birth-rates fall and mechanisation increases, trade routes creep out over the globe and political frontiers shift and solidify, the races of the earth meet and mingle, the balance of power swings around the production of iron and steel, oil, foodstuffs, coal and textiles ; haves and have-nots stand against the measur- ing rod, mankind unites against flood, famine and epidemic, divides into hostile groups warring or preparing war. . . . It is a fascinating and delightful spectacle, so fascinating and so delightful that to criticise seems the height of ingratitude and captiousness. And yet . . .

For one thing, the text lacks every quality that the " iso- types " enjoy. Fluent and felicitous in symbol, Professor Netirath is verbally afflicted with two left feet. He is as unhappy out of hls pictorial element as an albatross on land ; his sentences waddle painfully along, lurching from topic to topic by awkward and unsignposted transitions. Where they do no more than summarise the message of the symbols they are endurable ; where they supplement it with generalisations about " modernity " (whatever that may be) the origins of child-labour, or the relation between profits and war, they are atrocious. " Academic terminology is usually avoided," says the blurb. It certainly is. But Professor Hogben is rash to claim, on Professor Neurath's behalf, that he " exposes the truth about human society as it is, and not as social institu- tions are distorted by the mirrors of academic fictions through a miasma of abstract nouns." Professor Neurath uses abstract nouns as freely as the next man—only, whereas the competent academic generally makes some effort to define his terms (e.g., " profit "), Professor Neurath does not.

A graver criticism relates to the question-begging and argument post hoc ergo propter hoc which disfigures too many pages. Europe and the United States trade with the Southern and Eastern peoples. They also enjoy a higher standard of living than the latter. Therefore, the Southern and Eastern peoples " pay for " that higher standard. A diagram showing areas per head in countries around the Pacific illustrates the very silliest version of the " have and have-not Powers " argument. Pig-iron production in the U.S.S.R. mounted steadily through the 1930-33 world depression ; therefore, the U.S.S.R. was unaffected by that deOession—this at a time when the whole of Southern Russia was famine-stricken because the Plan, confronted with a fall- ing 'world price of wheat, called for hugely increased exports. Statistics may be none the less pluperfect liars for being attractively presented ; there is still something to be said for logic. One or two of Professor Neurath's tables remind one of some famous nonsense correlations obtainable from a dili- gent search of the available material : such as, for instance, the mathematically exact inverse correlation alleged to exist between the birth-rate of the United Kingdom and its annual import of bananas—or the ingenious relation by one statis- tician, whiling time away by a little private research, of his annual income to the fluctuations of the Pig Cycle. One can let one's imagination run very pleasantly on the possibilities of schematising and symbolising these connexions, and doubt- less they would look very impressive either as indices of modernity or as instances of the integration of life in a complex community. But just as that Cretan liar Epaminondas destroys one's faith in formal logic, so these statistical curiosa lead to scepticism of the " remorseless logic of facts."

When all is said and done, however, Modern Man in the Making remains an achievement impossible to ignore. Its content can get across to an audience which would not listen to the academic though he spoke with the tongues of men and of angels. It is no more tendentious than nine-tenths of the works dealing with similar themes, and a hundred times more comprehensible and stimulating. To quote Professor Hogben again, this time in fuller agreement, it "combines all that is best' in Descartes and the Daily Mirror." It is a contribution to the building of the World Brain in which Mr. IL G. Wells sees the only salvation of the human race. (Suggestion to Mr. Wells: Why do not he and Professor Neurath col- laborate?) The World Brain may, like the individual brains of men, have some questionable ideas ; but if it is human to err, it is sub-human not to think at all. With so much sub- humanity, of this and other kinds, conspicuous in the world, this Christmas gift to good citizenship is doubly welcome.