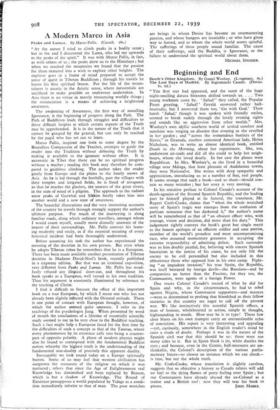 A Modern Marco in Asia

Peaks and Lamas. By Marco Pallis. (Cassell. as.) " kr the outset I tried to climb peaks in a bodily sense ; but in the end I discovered the Lama, who led me upwards to the peaks of the spirit." It was with Marco Pallis, in fact, as with others of us ; the peaks drew us to the Himalaya ; but when we reached the mountains we found that the passion for them matured into a wish to explore other heights. The explorer goes in a frame of mind prepared to accept the sense of quest in Tibetan Buddhism ; through his travels he learns his first spiritual lesson. For the life of the moun- taineer is ascetic in the Asiatic sense, where inessentials are sacrificed to make possible an endeavour undertaken. In Asia there is no virtue in merely renouncing worldly things ; the renunciation is a means of achieving a heightened awareness.

The awakening of Awareness, the first way of annulling Ignorance, is the beginning of progress along the Path. The Path of Buddhism leads through struggles and difficulties to those difficult heights at which certain aspects of the Truth may be apprehended. It is in the nature of the Truth that it cannot be grasped by the general, but can only be reached by the pupil who has set out to learn.

Marco Pallis, inspired one feels to some degree by the Boundless Compassion of the Teacher, attempts to guide the reader into the Tradition without debasing the Truth by making it available to the ignorant without effort. It is axiomatic in Tibet that there can be no spiritual progress without a teacher ; reading this book may therefore be com- pared to guideless climbing. The author takes the reader gently from Europe and the plains to the lonely snows of Asia. As he is led through the foothills, past the villages with their temples and irrigated fields, he is freed of arrogance so that he reaches the glaciers, the sources of the great rivers, in the state of mind of a pilgrim. The approach to the radiant snow peaks of Garwhal and Sikkim finally takes him into another world and a new state of awareness.

The beautiful illustrations and the very interesting accounts of the country he travels through strongly support the author's ultimate purpose. For much of the journeying is along familiar roads, along which ordinary travellers, amongst whom I would count myself, usually move dismally unaware of the import of their surroundings. Mr. Pallis conveys his learn- ing modestly and easily, as if the essential meaning of every historical incident had been thoroughly understood.

Before assuming his task the author has experienced the meaning of the doctrine in his own person. But even when he adopts Tibetan robes he remembers that he is a European. There has been made available another presentation of Tibetan doctrine in Madame David-Neel's book, recently published in a sixpenny edition. But that was an irrational exposition, very different from Peaks and Lamas. Mr. Pallis has stead- fastly refused any illogical short-cut, and throughout his book speaks as a European, well versed in his own tradition. Thus his argument is constantly illuminated by reference to the teaching of Christ.

I find it difficult to forecast the effect of this important book on a true European, by which I mean one who has not already been slightly infected with the Oriental attitude. There is one point of contact with European thought, however, of which the author seemed quite unaware. I refer to the teachings of the psychologist Jung. When presented by word of mouth the conclusions of a lifetime of essentially scientific study seemed to me to be very close to the Buddhist teaching. Such a fact might help a European faced for the first time by the difficulties of such a concept as that of the Tantras, where every phenomenon by its existence calls into being a counter- part of opposite polarity. A phase of modern physics might also be found to correspond with the fundamental Buddhist notion whereby the highest truth is the understanding of the fundamental non-duality of precisely this apparent duality.

Inescapably we look round today on a Europe spiritually barren. Some of us may feel that western civilisation has outgrown the resources of the religion on which it was nurtured ; others that since the Age of Enlightenment real Knowledge has diminished and been replaced by Reason, which is but a shadow of Knowledge. The Round of Existence presupposes a world populated by Yidags as a condi- tion immediately inferior to that of man. The poor wretches are beings in whom Desire has become an overmastering passion, and whose hungers are insatiable ; or who have given way to hatred, and to whom the whole world seems spiteful. The sufferings of these people sound familiar. The cause of their sufferings, said the Buddha, is Ignorance, or the failure to understand the spiritual world about them.