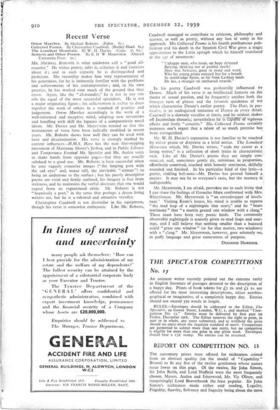 MR. MICHAEL ROBERTS is what cricketers call a " good all- rounder." He writes poetry, edits it, criticises it and theorises about it ; and in each capacity he is distinguished and proficient. His versatility makes him very representative of his generation, for he is intimately familiar with the problems and achievements of his contemporaries ; and, in his own practice, he has worked over much of the ground that they cover. Again, like the " all-rounder," he is not in any one role the equal of the most successful specialists. He is not

a major originating figure ; his achievement is rather to draw together the work of others in a standard of practice and judgement. Orion Marches accordingly is the work of a well-informed and receptive mind, adapting new inventions and handling with skill the legacies of a comparatively novel idiom. Mr. Davies and Mr. Meyerstein remind us that the instruments of verse have been radically modified in recent years. Mr. Roberts shows how well they can be used with taste and discrimination. His verse is strongly marked by current influences—H.M.S. Hero has the neat fine-stepping movement of Marianne Moore's Jerboa, and in Public Library and Temperance Festival Mr. Spender and Mr. Auden seem to shake hands from opposite pages—but they are usually subdued to a good use. Mr. Roberts is least successful when he uses vaguely evocative images (" the limping poet with the sad eyes" and, worse still, the inevitable " airman ") to bring an undertone to the surface ; but his purely descriptive poems are vivid and firmly outlined, his imagery is free from staleness, and he maintains the verbal decorum that one would expect from an experienced critic. Mr. Roberts is not " hopelessly a poet," in the sense that perhaps a dozen living writers are, but he is a talented and attractive versifier.

Christopher Caudwell is not dissimilar in his equipment, though his verse is somewhat embryonic. Like Mr. Roberts,

Caudwell managed to contribute to criticism, philosophy and science, as well as poetry, without any lass of unity in his

approach. His Collected Poems is his fourth posthumous pub- lication and his death in the Spanish Civil War gives a tragic appositeness to the Latin epitaph which he himself translated at the age of seventeen:

" Unhappy men, who roam, on hope deferred Relying, thinking not of painful death!

Here was Seleucos, great in mind and word, Who his young prime enjoyed but for a breath. In world-edge Spain, so far from Lesbian lands He lies, a stranger on uncharted strands."

In his poetry Caudwell was profoundly influenced by Donne. Much of his verse is an intellectual fantasia on the theme of sexual passion, and he frequently catches both the brusque turn of phrase and the feverish quickness of wit which characterise Donne's earlier poetry. The Hair, in par- ticular, is an undisguised imitation of Donne in every detail.

Caudwell is a slovenly versifier at times, and he seldom shakes off Jacobethan rhetoric; nevertheless he is capable Vig6rous effects and lively " conceits." His Collected Poems certainly increases one's regret that a talent of so much promise has been extinguished.

Mr. W. H. Davies's reputation is too familiar to be touched by either praise or dispraise in a brief notice. The Loneliest Mountain which, Mr. Davies writes, " ends my career as a living writer," is a collection of short lyrics in characteristic

rounded and finished. In his particular kind of tiny lyric—a pretty, tinkling bell-note—Mr. Davies has proved himself a master. It may not be to everyone's taste, but the mastery is indisputable.

Mr. Meyerstein, I am afraid, provokes me to such levity that

I can share the feelings of Groucho Marx confronted with Mrs: Rittenhouse. Mr. Meyerstein is " an eavesdropper of loveli- ness." Visiting Keats's house, his mind is unable to repress " the mad leap of a nightingale that soars," and he " bears testimony " that " a martin grazed one window with a clang."

These must have been very poetic birds. The commonly observable nightingale is scarcely given to mad leaps and soar- ings, and .I still believe that nothing smaller than a buzzard could " graze one window " (or for that matter, two windows) with a ' clang." Mr. Meyerstem, however, goes solemnly on, in puffy language and great earnestness of purpose.