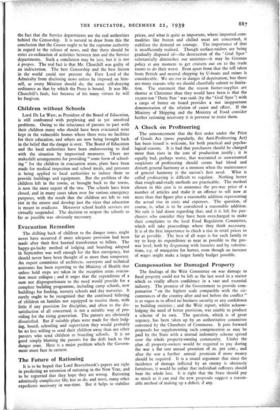 Lord De La Warr, as President of the Board of Education, is still confronted with perplexing and as yet unsolved problems. Owing to the reluctance of parents to part with their children many who should have been evacuated were kept in the vulnerable homes where there were no facilities for their education, and others are now being brought back in the belief that the danger is over. The Board of Education and the local authorities have been endeavouring to deal with the situation by improvised measures. There are makeshift arrangements for providing " some form of school- ing " for the children in evacuation areas, plans have been made for medical inspection and school meals, and pressure is being applied to local authorities to induce them to provide buildings and equipment. But the problem of the children left in the towns, or brought back to the towns, is now the more urgent of the two. The schools have been closed, and in many cases taken over for various emergency purposes, with the result that the children are left to run riot in the streets and develop just the vices that education is meant to eradicate. Moreover school health services are virtually suspended. The decision to reopen the schools so far as possible was obviously necessary.