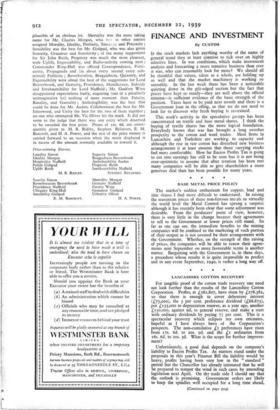 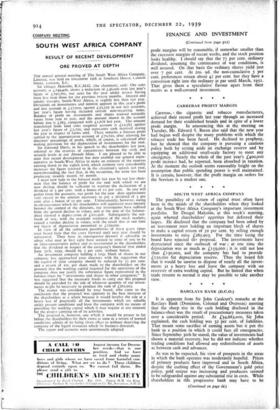 For tangible proof of the cotton trade recovery one need not look further than the results of the Lancashire Cotton Corporation. Profits, at £582,807, have risen by £278,382, so that there is enough to cover debenture interest (£75,000), the 5 per cent. preference dividend (£68,875), put £155,000 to depreciation reserve, as a year ago, another £150,000, against nil, to general reserve, and make a start with ordinary dividends by paying 71 per cent. This is a spectacular recovery which eclipses my own estimates, hopeful as I have always been of the Corporation's prospects. The non-cumulative £x preferences have risen from 17s. 6d. to 20S. 9d. and the LI ordinaries from 16s. 6d. to 20S. 3d. What is the scope for further improve- ment?

Unforttinately, a good deal depends on the company's liability to Excess Profits Tax. As matters stand under the proposals in this year's Finance Bill the liability would be heavy, profits having been very low in the " standard " period but the Chancellor has already intimated that he will be prepared to temper the wind in such cases by amending legislation next April. On the trade side I should say that the outlook is promising. Government orders are likely to keep the spindles well occupied for a long time ahead, (Continued on Page 914) FINANCE AND INVESTMENT (Continued lsoln page 912) profit margins will be reasonable, if somewhat smaller than the excessive margins of recent weeks, and the stock position looks healthy. I should say that the 71 per cent. ordinary dividend, assuming the continuance of war conditions, is well assured. On that basis the ordinary shares yield just over 7 per cent. At 20S. 9d. the non-cumulative 5 per cent. preferences return about 4:1 per cent. but they have a conversion right into the ordinary at par until March, 1951. That gives them a speculative flavour apart from their merits as a well-covered investment.