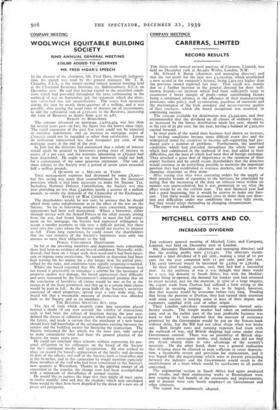 Mr. Edward S. Baron (chairman and managing director) said that the net profit for the year was £2,005,839, which established a new record in the company's history, being £401,205 higher than the previous record reported last year. That result was mainly due to a further increase in the general demand for their well- known brands—an increase which had been .sufficiently large to counteract a lower margin of profit—other contributing factors being a continued advance in the efficiency of their manufacturing processes, sales policy, staff co-operation, purchase of materials and the maintenance of the high standard and never-varying quality of their products, which the board recognised was essential to continuing success.

The amount available for distribution was £2,242,000, and they recommended that the dividend on all classes of ordinary shares, as increased by the bonus distribution made last year, should be at the rate of 3o per cent. for the year, leaving a balance of £303,210 carried forward.

In most parts of the world their business had shown an increase, but trading conditions became more difficult every day and the widespread trend for countries to become self-supporting had pro- duced quite a number of problems. Furthermore, the unsettled conditions which had prevailed throughout the whole year and which had culminated in the outbreak of war, had added to their difficulties, not the least of which had been that of foreign exchange. They attached a great deal of importance to the retention of their export business and he could assure shareholders that the directors would continue to do everything possible to maintain the important position they had established in overseas markets, and to meet the changing situations as they arose. After stating that they were executing orders for the supply of their popular brands of cigarettes to the Services, he concluded by saying that the increasing of the duty on tobacco twice within six months was unprecedented, but it was premature to say what the effect would be on the current year. The new financial year had had a good beginning, but it would be unwise to make any fore- cast. That there would be increased costs in more than one direc- tion and difficulties under war conditions they were fully aware, but they would adapt themselves to changing circumstances The report was adopted.