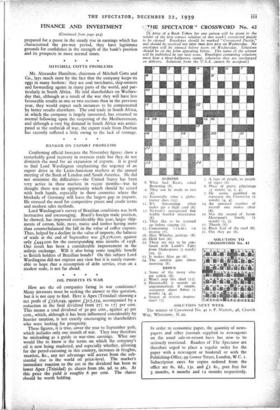 show a remarkably good recovery in overseas trade but they do not diminish the need for an expansion of exports. It is good to find Lord Wardington emphasising the urgency of an export drive in the Latin-American markets at the annual meeting of the Bank of London and South America. He did not minimise the difficulties-the United States has been very active in these markets in recent months-but he thought there was an opportunity which should be seized with both hands, especially in those countries where the blockade of Germany will leave the largest gap in imports. He stressed the need for competitive prices and credit terms and modern sales methods.

Lord Wardington's survey of Brazilian conditions was both instructive and encouraging. Brazil's foreign trade position, he showed, has improved considerably this year, larger ship- ments of cotton, hide, meat, maize and timber having more than counterbalanced the fall in the value of coffee exports. Thus, helped by a decline in the value of imports, the balance of trade at the end of September was £8,576,000, against only £444,000 for the corresponding nine months of 1938. One result has been a considerable improvement in the milreis exchange. Will it also bring some tangible benefit to British holders of Brazilian bonds? On this subject Lord Wardington did not express any view but it is surely reason- able to hope that a resumption of debt service, even on a modest scale, is not far ahead.