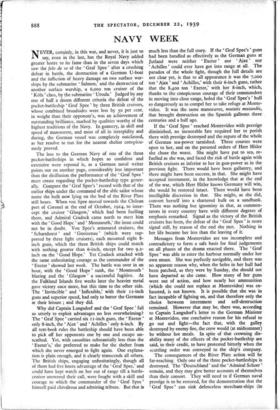 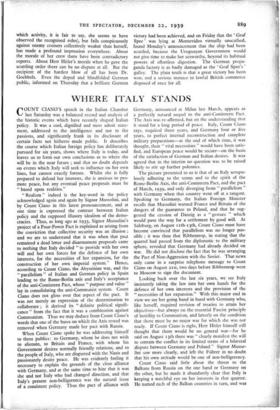 NEVER, certainly, in this war, and never, it is just to say, even in the last, has the Royal Navy added greater lustre to its fame than in the seven days which saw the felo de se of the ' Graf Spec ' after a crushing defeat in battle, the destruction of a German U-boat and the infliction of heavy damage on two surface war- ships by the submarine ' Salmon,' and the destruction of another surface warship, a 6,000 ton cruiser of the ' Köln ' class, by the submarine Ursula.' Judged by any one of half a dozen different criteria the defeat of the pocket-battleship ' Graf Spee ' by three British cruisers, whose combined broadsides were less by 5o per cent. in weight than their opponent's, was an achievement of outstanding brilliance, marked by qualities worthy of the highest traditions of the Navy. In gunnery, in skill and speed of manoeuvre, and most of all in intrepidity and daring, the German vessel was completely outclassed, as her resolve to run for the nearest shelter conspicu- ously proved.

The loss to the German Navy of one of the three pocket-battleships in which hopes so confident and extensive were reposed is, as a German naval writer points out on another page, considerably less important than the disillusion the performance of the ' Graf Spec ' must create regarding the pocket-battleship type gener- ally. Compare the ' Graf Spee's ' record with that of the earlier ships under the command of the able sailor whose name the hulk now lying on the bed of the River Plate still bears. When von Spec moved towards the Chilean port of Coronel at the end of October, 1914, to inter- cept the cruiser ' Glasgow,' which had been fuelling there, and Admiral Cradock came north to meet him with the ' Good Hope ' and ' Monmouth,' the issue could not be in doubt. Von Spee's armoured cruisers, the Scharnhorst ' and Gneisenau ' (which were sup- ported by three light cruisers), each mounted eight 8- inch guns, which the three British ships could match with nothing greater than 6-inch, except for two 9.2- inch on the ' Good Hope.' Yet Cradock attacked with the same unhesitating courage as the commander of the ' Exeter ' showed last week. The battle was over in an hour, with the ' Good Hope ' sunk, the Monmouth ' blazing and the ' Glasgow' a successful fugitive. At the Falkland Islands five weeks later the heavier metal gave victory once more, but this time to the other side.

The ' Invincible ' and ' Inflexible,' with their 12-inch guns and superior speed, had only to batter the Germans at their leisure ; and they did.

Why did Captain Langsdorf and the ' Graf Spee ' fail so utterly to exploit advantages no less overwhelming?

The ' Graf Spee ' carried six t t-inch guns, the ` Exeter ' only 8-inch, the ' Ajax ' and ' Achilles ' only 6-inch. By all text-book rules the battleship should have been able to pick off her opponents one by one and escape un- scathed. Yet, with casualties substantially less than the ' Exeter's,' she preferred to make for the shelter from which she never emerged to fight again. One explana- tion is plain enough, and it clearly transcends all others. The British ships, engaging unhesitatingly, though all of them had five knots advantage of the ' Graf Spec,' and could have kept watch on her out of range till a battle- cruiser answered their call, were fought with a skill and courage to which the commander of the ' Graf Spee ' himself paid chivalrous and admiring tribute. But that is much less than the full story. If the ' Graf Spee's ' guns had been handled as effectively as the German guns at Jutland were neither ' Exeter ' nor ' Ajax ' nor ' Achilles ' could ever have got into range at all. The paradox of the whole fight, though the full details are not clear yet, is that to all appearance it was the 7,000 ton ' Ajax ' and ' Achilles,' with their 6-inch guns, rather that the 8,40o ton ' Exeter,' with her 8-inch, which, thanks to the conspicuous courage of their commanders in moving into close range, holed the ' Graf Spee's ' hull so dangerously as to compel her to take refuge at Monte- video. It was the same manoeuvre, mutatis mutandis, that brought destruction on the Spanish galleons three centuries and a half ago.

If the ' Graf Spee ' reached Montevideo with prestige diminished, no inexorable fate required her to perish there with prestige destroyed and the repute of the whole of German sea-power tarnished. Three courses were open to her, and on the personal orders of Herr Hitler she chose the worst. She might have put to sea, re- fuelled as she was, and faced the risk of battle again with British cruisers as inferior to her in gun-power as in the previous fight. There would have been gallantry, and there might have been success, in that. She might have accepted internment, in the knowledge that at the end of the war, which Herr Hitler knows Germany will win, she would be restored intact. There would have been intelligible discretion in that. She might, as she did, convert herself into a shattered hulk on a sandbank. There was nothing but ignominy in that, as commen- tators in every country have with different degrees of emphasis remarked. Signal as the victory of the British cruisers has been, the defeat of the ' Graf Spee ' is more signal still, by reason of the end she met. Nothing in her life became her less than the leaving of it.

Messages from Montevideo are too incomplete and contradictory to form a safe basis for final judgements on all phases of the drama enacted there. The ' Graf Spee ' was able to enter the harbour normally under her own steam. She was perfectly navigable, and there was no apparent reason why, when the holes in her hull had been patched, as they were by Sunday, she should not have departed as she came. How many of her guns were out of action, and how nearly her ammunition (which she could not replace at Montevideo) was ex- hausted, is not known. It is possible that she was in fact incapable of fighting on, and that therefore only the choice between internment and self-destruction remained. However that may be, there was, according to Captain Langsdorf's letter to the German Minister at Montevideo, one conclusive reason for his refusal to go out and fight—the fact that, with the galley destroyed by enemy fire, the crew would (at midsummer) be without hot meals. In spite of that crowning dis- ability many of the officers of the pocket-battleship are said, to their credit, to have protested bitterly when the scuttling order was conveyed to the ship's company.

The consequences of the River Plate action will be far-reaching. Only one of the three pocket-battleships is destroyed. The 'Deutschland ' and the ' Admiral Scheer' remain, and they may give better accounts of themselves than their consort. They will need to if German naval prestige is to be restored, for the demonstration that the ' Graf Spee ' can sink defenceless merchant-ships (in which activity, it is fair to say, she seems to have observed the recognised rules), but fails conspicuously against enemy cruisers collectively weaker than herself, has made a profound impression everywhere. About the morale of her crew there have been contradictory reports. About Herr Hitler's morale when he gave the scuttling order there can be no dispute at all. But the recipient of the hardest blow of all has been Dr. Goebbels. Even the doped and blindfolded German public, informed on Thursday that a brilliant German victory had been achieved, and on Friday that the ' Graf Spee ' was lying at Montevideo virtually unscathed, found Monday's announcement that the ship had been scuttled, because the Uruguayan Government would not give time to make her seaworthy, beyond its habitual powers of effortless digestion. The German propa- ganda factory is as badly damaged as the ' Graf Spee's ' galley. The plain truth is that a great victory has been won, and a serious menace to lawful British commerce disposed of once for all.