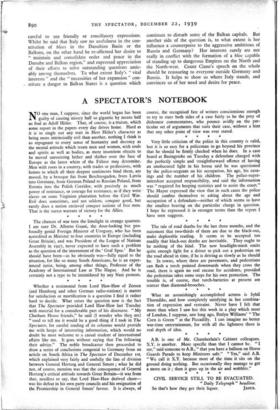 NO one man, I suppose, since the world began has been guilty of causing misery half so gigantic by means half so foul as Adolf Hitler. That, of course, is a truism, which some report in the papers every day drives home. Hard as it is to single out any trait in Herr Hitler's character as being more intrinsically evil than another, nothing I think is so repugnant to every sense of humanity and decency as the mental attitude which treats men and women, with souls and spirits as well as bodies, as mere insentient objects to be moved unresisting hither and thither over the face of Europe as the latest whim of the Fiihrer may determine. Men with roots in a country, with trades or professions, with homes to which all their deepest sentiments bind them, are moved, by a brusque fiat from Berchtesgaden, from Latvia into Germany, from German Poland to Russian Poland, from Estonia into the Polish Corridor, with precisely as much power of resistance, or courage for resistance, as if they were slaves on some Virginian plantation before the Civil War. Evil does sometimes, and not seldom, conquer good, but rarely does a nation enslaved conquer nations of free men. That is the surest warrant of victory for the Allies.