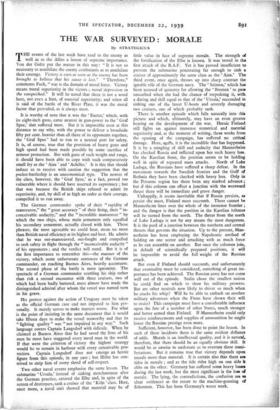 THE events of the last week have read to the enemy as well as to the Allies a lesson of supreme importance. on der Goltz put the matter in this way : " It is not so necessary to annihilate the enemy combatants as to annihilate their courage. Victory is ours as soon as the enemy has been brought to believe that his cause is lost." " Therefore," comments Foch, " war is the domain of moral force. Victory means moral superiority in the victors ; moral depression in the vanquished." It will be noted that there is not a word here, not even a hint, of material superiority; and when all is said of the battle of the River Plate, it was the moral factor that prevailed, as it always must.

It is worthy of note that it was the ' Exeter,' which, with its eight-inch guns, came nearest in gun-power to the Graf Spee,' that suffered most. But it is impossible even at this distance to say why, with the power to deliver a broadside fifty per cent. heavier than all three of its opponents together, the Graf Spee' had to run to a neutral port for safety. It is, of course, true that the provision of heavy guns and high speed had been made possible by some sacrifice of armour protection. But with guns of such weight and range, it should have been able to cope with such comparatively small fry as the ' Ajax' and ' Achilles.' It is this that should induce us to receive with caution the suggestion that the pocket-battleship is an uneconomical type. The newest of the class, however, the ' Graf Spee,' as a fact, proved too vulnerable where it should have asserted its supremacy ; but that was because the British ships refused to admit its superiority, and, by skill of as high an order as their courage, compelled it to run away.

The German commander spoke of their " rapidity of manoeuvre," the " great accuracy " of their firing, their " in- conceivable audacity," and the " incredible manoeuvre " by which the two ships, whose main armament only equalled his secondary armament, actually closed with him. These phrases, the most agreeable we could hear, mean no more than British naval efficiency at its highest and best. He admits that he was out-manoeuvred, out-fought and compelled to seek safety in flight through the " inconceivable audacity " of his opponents ; and the verdict will stand. But it is of the first importance to remember this—the manner of the victory, which some unfortunate sentences of the German commander, on reaching Buenos Aires, heavily accentuate. The second phase of the battle is mere ignominy. The spectacle of a German commander scuttling his ship rather than risk a second encounter with three cruisers, two of which had been badly battered, must almost have made the distinguished admiral after whom the vessel was named turn -in his grave.

His protest against the action of Uruguay must be taken as the official German case and not imputed to him per- sonally. It merely serves to make matters worse. For what is the point of insisting in the same document that it would take fifteen days to make the vessel seaworthy and that its " fighting quality " was " not impaired in any way." Such language covers Captain Langsdorf with ridicule. When he claimed at Buenos Aires that he had saved the lives of his men he must have staggered every naval man in the world. If that were the criterion of victory the highest strategy would be to remain in harbour with every conceivable pro- tection. Captain Langsdorf does not emerge an heroic figure from this episode, in any case ; but Hitler has con- trived to strip him of every shred of self-respect.

Two other naval events emphasise the same lesson. The submarine ' Ursula,' instead of sinking merchantmen after the German practice, entered the Elbe and, in spite of the screen of destroyers, sank a cruiser of the KOln ' class. Here, once more, a naval unit showed that material may be of little value in face of supreme morale. The strength of the fortification of the Elbe is known. It was tested in the first attack of the R.A.F. Yet it has proved insufficient to prevent the submarine penetrating far enough to sink a cruiser of approximately the same class as the ' Ajax.' The third event, once again, throws up into sharp contrast the ignoble role of the German navy. The Salmon,' which has been accused of quixotry for allowing the ' Bremen ' to pass unscathed when she had the chance of torpedoing it, with a daring and skill equal to that of the Ursula,' succeeded in sinking one of the latest U-boats and severely damaging two cruisers, one of which probably sank.

There is another episode which falls naturally into this picture and which, ultimately, may have an even greater bearing on the development of the war. Heroic Finland still fights on against immense numerical and material superiority and, at the moment of writing, three weeks from the opening of the campaign, has suffered no critical damage. Here, again, it is the incredible that has happened. It is by a mingling of skill and audacity that Mannerheim has checked Russia and inflicted upon her such heavy loss. On the Karelian front, the position seems to be holding well in spite of repeated mass attacks. North of Lake Ladoga, the Russians have suffered a sharp defeat. In the movement towards the Swedish frontier and the Gulf of Bothnia they have been checked with heavy loss. Only in the Petsamo region has there been any marked advance ; but if this column can effect a junction with the westward thrust there will be immediate and grave danger.

Unhappily, it seems inevitable that if Russia persists, as persist she must, Finland must succumb. There cannot be Mannerheim lines over the whole of the immense frontier ; and the danger is that the position in the Karelian isthmus will be turned from the north. The threat from the north of Lake Ladoga is not by any means the most dangerous. It is the peril of a junction between the northern and central thrusts that governs the situation. Up to the present, Man- nerheim has been employing the Napoleonic method of holding on one sector and attacking with as much force as he can assemble on another. But once the columns join, in default of scientifically prepared positions, it will be impossible to avoid the full weight of the Russian attack.

But even if Finland should succumb, and unfortunately that eventuality must be considered, something of great im- portance has been achieved. The Russian army has not come well out of the episode. Stalin chose the smallest nation he could find on which to show his military prowess. But are other neutrals now likely to shiver so much when he cracks his whip? Will he be able to embark on another military adventure when the Finns have shown their will to resist? This campaign must have a considerable influence upon the fate of a number of other States, much stronger and better armed than Finland. If Manncrheim could only receive reinforcements and supplies of ammunition he might lower the Russian prestige even more.

Sufficient, however, has been done to point the lesson. In each of these incidents there is the same evident defiance of odds. Morale is an intellectual quality, and it is natural, therefore, that there should be an equally obvious skill. It would be as unwise to underrate as to overrate these mani- festations. But it remains true that victory depends upon morale more than material. It is certain also that there ars tides in morale ; and as the tide rides high on one side ft ebbs on the other. Germany has suffered some heavy losses during the last week, but the most significant is the loss of morale. The lying, the contradictions, the confusion are as clear evidences as the resort to the machine-gunning of fishermen. This has been Germany's worst week.