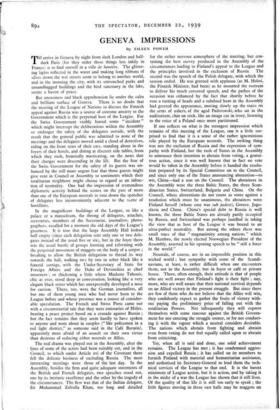 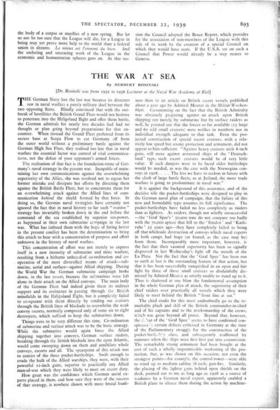 TO arrive in Geneva by night from dark London and half- dark Paris (for they order these things less inkily in France) is to find oneself in a vile de lumiere. The glitter- ing lights reflected in the water and making long ribbons of silver down the wet streets seem to belong to another world, and in the morning the city, with its untrenched parks and unsandbagged buildings and the bird sanctuary in the lake, seems a haven of peace.

But uneasiness and black apprehension lie under the calm and brilliant surface of Geneva. There is no doubt that the meeting of the League of Nations to discuss the Finnish appeal against Russia was a source of extreme anxiety to the Government which is the perpetual host of the League. For the Swiss Government visibly feared some " incident " which might interrupt the deliberations within the Assembly or endanger the safety of the delegates outside, with the result that the general public was admitted to none of the meetings and the delegates moved amid a cloud of detectives, riding on the front seats of their cars, standing about in the foyers of their hotels, and dining at discreet side tables, from which they rush, frenziedly masticating, on the news that their charges were descending in the lift. But the fear of the Swiss Government for the safety of its guests was en- hanced by the still more urgent fear that those guests might give vent in Council or Assembly to sentiments which their totalitarian neighbour might choose to regard as an infrac- tion of neutrality. One had the impression of tremendous diplomatic activity behind the scenes on the part of more than one of the European neutrals to tone down the speeches of delegates less inconveniently adjacent to the scene of hostilities.

In the magnificent buildings of the League, so like a palace or a mausoleum, the throng of delegates, attaches, secretaries, members of the Secretariat, journalists, photo- graphers, recalled for a moment the old days of the League's greatness. It is true that the large Assembly Hall looked half empty (since each delegation sent only one or two dele- gates instead of the usual five or six), but in the foyer there was the usual bustle of groups forming and reforming with the perpetual movement of maggots on the body of a corpse ; breaking to allow the British delegation to thread its way towards the hall, walking two by two in sober black like a funeral cortege, with the Under-Secretary of State for Foreign Affairs and the Duke of Devonshire as chief mourners ; or thickening a little where Madame Tabouis, chic as ever, stood deep in conversation, looking like a very elegant black setter which has unexpectedly developed a nose for carrion. There, too, were the German journalists, all but one of them young men who had never been to the League before and whose presence was a source of consider- able speculation. The French and Swiss Press came out with a circumstantial tale that they were emissaries of Hitler, bearing a peace project based on a crusade against Russia ; but the fact remains that they seem hardly to have spoken to anyone and went about in couples (" like policemen in a red light district," as someone said in the Café Bavaria), apparently more afraid of an assault on their own virtue than desirous of seducing either neutrals or Allies.

The real drama was played out in the Assembly, after the lines of some of the actors had been suitably cut, and in the Council, to which under Article xvi of the Covenant there fell the delicate business of excluding Russia. The most interesting meetings were those of the last day. In the Assembly, besides the firm and quite adequate statements of the British and French delegates, two speeches stood out, one by its intrinsic excellence and the other by the tragedy of the circumstances. The first was that of the Indian delegate, Sir Muhammad Zafrulla Khan, too long and detailed for the rather nervous atmosphere of the meeting, but con- taining the best survey produced in the Assembly of the circumstances leading to Finland's appeal to the League and the principles involved in the exclusion of Russia. The second was the speech of the Polish delegate, with which the session ended. He was greeted with applause (as M. Holsti, the Finnish Minister, had been) as he mounted the rostrum to deliver his much censored speech, and the pathos of the occasion was enhanced by the fact that shortly before he rose a turning of heads and a subdued hum in the Assembly had greeted the appearance, moving slowly up the stairs on the arms of ushers, of the aged Paderewski, who sat in the auditorium, chin on stick, like an image cut in ivory, listening to the voice of a Poland once more partitioned.

If one reflects on what is the strongest impression which remains of this meeting of the League, one is a little sur- prised to find that it is a sense of the rather ignominious role played by the European neutrals. The striking thing was not the exclusion of Russia and the expression of sym- pathy with Finland, but the rush of States in the Assembly to announce their intention to abstain from voting, a gratui- tous action, since it was well known that in fact no vote would be taken in the Assembly before it handed the resolu- tion prepared by its Special Committee on to the Council, and since only one of the States announcing abstention—to wit, China---had a seat on the Council. The abstainers in the Assembly were the three Baltic States, the three Scan- dinavian States, Switzerland, Bulgaria and China. On the Council, where abstentions do not count as votes against a resolution which must be unanimous, the abstainers were Finland herself (whose case was sub judice), Greece, Jugo- slavia and China. China's special debt to Russia is well known, the three Baltic States are already partly occupied by Russia, and Switzerland was perhaps justified in taking the view that as host of the League it was bound to an ultra-perfect neutrality. But among the others there was small trace of that " magnanimity among nations " which M. Hambro, the newly elected Norwegian President of the Assembly, asserted in his opening speech to be " still a force in the world."

Neutrals, of course, are in an impossible position in this wicked world ; but sympathy with some of the Scandi- navians, at least, is rather difficult when one encounters them, not in the Assembly, but in foyer or café or private house. There, often enough, their attitude is that of people who are well aware that Finland's fight is their fight ; nay, more, who are well aware that their national survival depends on an Allied victory in the present struggle. But since there are few of them who do not believe that the Allies will win, they confidently expect to gather the fruits of victory with- out paying the preliminary price of falling out with the totalitarian Powers. Not infrequently they will express themselves with some rancour against the British Govern- ment for not entering the struggle sooner, or for not conduct- ing it with the vigour which a neutral considers desirable. The nations which abstain from fighting and abstain even from voting do not feel equally called upon to abstain from criticising.

Yet, when all is said and done, one solid achievement remains. The League has met ; it has condemned aggres- sion and expelled Russia ; it has called on its members to furnish Finland with material and humanitarian assistance, and authorised its Secretary-General to lend them the tech- nical services of the League to that end. It is the barest minimum of League action, but it is action, and by taking it in the midst of a war the League has shown that it still lives. Of the quality of that life it is still too early to speak ; the little figures moving in those vast halls may be maggots on the body of a corpse or mayflies of a new spring. But let us not be too sure that the League will die, for a League in being may yet prove more help to the world than a federal union in dreams. Le mieux est rennemi du bien. And the enduring and unceasing work of the League in the economic and humanitarian spheres goes on. At this ses- sion the Council adopted the Bruce Report, which provides for the association of non-members of the League with this side of its work by the creation of a special Council on which they would have seats. If the U.S.A. sat on such a Council that Power would already be a step nearer to Geneva.