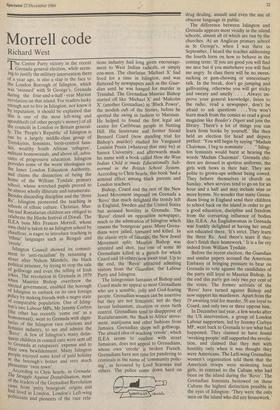 The Centre Party victory in the recent Grenada general election, while seem- ing to justify the military intervention there of a year ago, is also a slap in the face to the London Borough of Islington, which was 'twinned' with St George's, Grenada during the four-and-a-half - year Marxist revolution on that island. For readers lucky enough not to live in Islington, nor know it by reputation, it should be explained that this is one of the most left-wing and spendthrift (of other people's money) of all the councils in London or Britain general- ly. The 'People's Republic' of Islington is run by a largely middle-class group of Trotskyists, feminists, birth-control fana- tics, wealthy South African 'refugees', militant homosexuals, and above all, advo- cates of progressive education. Islington provides some of the worst ideologues on the Inner London Education Authority, and claims the distinction of being the home of the William Tyndale primary school, whose wretched pupils proved to be almost wholly illiterate and innumerate. Besides discarding discipline and the 'three Rs', Islington pioneered the teaching in schools of ethnic culture. Christian, Mus- lim and Rastafarian children are obliged to celebrate the Hindu festival of Diwali. The ILEA boss Mrs Frances Morrell, whose Own child is taken to an Islington school by chauffeur, is eager to introduce teaching in ethnic' languages such as Bengali and creole'.

Islington Council showed its commit- ment to 'anti-racialism' by renaming a street after Nelson Mandela, the black Political prisoner, by trying to stop the sale of golliwogs and even the telling of Irish jokes. The revolution in Grenada in 1979 when Maurice Bishop overthrew the elected government, enabled the borough of Islington to embark on its own foreign Policy by making friends with a negro state of comparable population. One of Isling- ton's two Labour MPs, Mr Jeremy Corbyn the other has recently 'come out' as a homosexual), went to Grenada with digni- taries of the Islington race relations and feminist industry, to see and admire the Revo'. A few of Islington's many delin- quent children in council care were sent off to Grenada at ratepayers' expense and to their own bewilderment. Many Islington People enjoyed some kind of paid holiday at the borough's hotter and very much Pleasanter 'twin town'. According to Chris Searle, in Grenada: The Struggle Against Destabilisation, most of the leaders of the Grenadian Revolution Fame from 'petty bourgeois' origins and had lived in London. London's Left-wing politicians and pioneers of the race rela- tions industry had long given encourage- ment to West Indian radicals, or simply con-men. The charlatan 'Michael X' had lived for a time in Islington, and was flattered by newspapers such as the Guar- dian until he was hanged for murder in Trinidad. The Grenadian Maurice Bishop started off like 'Michael X' and 'Malcolm X' (another Grenadian) in 'Black Power', the modish cult of the Sixties, before he spotted the swing in fashion to Marxism. He helped to found the first legal aid centre for Caribbean people in Notting Hill. His lieutenant and former friend Bernard Coard (now standing trial for Bishop's murder) studied his Vanguard Leninist Praxis (whatever that may be) at Sussex University, and afterwards made his name with a book called How the West Indian Child is made Educationally Sub- normal in the British School System. According to Chris Searle, this book 'had a seminal effect among black parents and London teachers.'

Bishop, Coard and the rest of the New Jewel Movement imposed on Grenada a `Revo' that much delighted the trendy left in England, Sweden and the United States but aroused hostility in Grenada. The `Revo' closed an opposition newspaper, much to the admiration of Islington which resents the 'bourgeois' press. Many Grena- dians were jailed, tortured and killed. In the classic style of fanatics, the New Jewel Movement split; Maurice Bishop was arrested and shot, just one of some 80 Grenadians killed in a putsch for which Coard and 18 others now await trial. Up to the end, the `Revo' attracted admiring visitors from the Guardian, the Labour Party and Islington. The Islingtonian fantasies of Bishop and Coard made no appeal to most Grenadians who are a sensible, jolly and God-fearing people. Grenadian women can be assertive but they are not feminists; not do they favour lesbianism, abortion or even birth control. Grenadians tend to disapprove of Rastafariansim, the 'Back to Africa' move- ment, marijuana and other fashions from Jamaica. Grenadian shops sell golliwogs. The absurd idea of teaching 'creole', which ILEA seems to confuse with street Jamaican, does not appeal to Grenadians, whose own 'creole' is broken French. Grenadians have not time for pandering to criminals in the name of 'community polic- ing', as favoured by Lord Scarman and others. The police come down hard on drug dealing, assault and even the use of obscene language in public.

The difference between Islington and Grenada appears most vividly in the island schools, almost all of which are run by the churches. At an Anglican primary school in St George's, when I was there in September, I heard the teacher addressing the fourth form on how to behave in the coming term: 'If you are good you will find me nice but if you misbehave you will find

me angry. In class there will be no sweet- sucking or gum-chewing or unnecessary

talk. In the break, don't go jumping and gallivanting, otherwise you will get sticky and sweaty and smelly . . . . Always im- prove your general knowledge, listen to the radio, read a newspaper, don't be afraid to ask questions . . .. You won't learn much from the comics so read a good magazine like Reader's Digest and join the library. There's a lot of things you can learn from books by yourself.' She then held an election for head and deputy prefect: 'You will begin by saying "Madam Chairman, I beg to nominate . . . ." Isling- ton feminists would burst at hearing the words 'Madam Chairman'. Grenada chil- dren are dressed in spotless uniforms, the girls with bows in their hair. They are polite to grown-ups without being cowed. They behave themselves in church on Sunday, when services tend to go on for an hour and a half and may include nine or more hymns. No wonder that many Grena- dians living in England send their children to school back on the island in order to get a good education, discipline and freedom from the corrupting influence of bodies like ILEA. An Englishwoman in Grenada was frankly delighted at having her small son educated there. 'It's strict. They learn the three Rs. And there's tears if they don't finish their homework.' It is a far cry indeed from William Tyndale.

Before the recent election, the Guardian and similar papers accused the American Embassy of bringing pressure to bear on Grenada to vote against the candidates of the party still loyal to Maurice Bishop. In the end this party got only two per cent of the votes. The former activists of the `Revo' have turned against Bishop and now support his murderers. Apart from the 19 awaiting trial for murder, 50 are loyal to Coard, and only two or three oppose him.

In December last year, a few weeks after the US intervention, a group of London Labour supporters, led by Jeremy Corbyn MP, went back to Grenada to see what had happened. They claimed to have found `working people' still supported the revolu- tion, and claimed that they met with hostility only when it was thought they were Americans. The Left-wing Grenadian women's organisation told them that the American troops were molesting local girls, in contrast to the Cubans who had been on the island during the `Revo'. The Grenadian feminists bestowed on these Cubans the highest distinction possible in the eyes of Islington: 'They were the only men on the island who did any housework.'