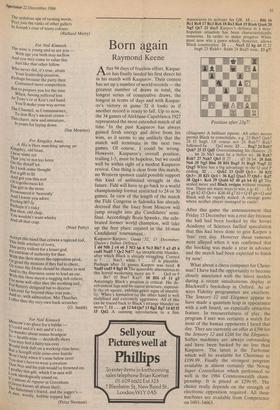 After 94 days of fruitless effort, Kaspar- ov has finally landed his first direct hit in his match with Kasparov. Their contest has set up a number of world records — the greatest number of draws in total, the longest series of consecutive draws, the longest in terms of days and with Kaspar- ov's victory in game 32 it looks as if another record is ready to fall. Up to now, the 34 games of Alekhine-Capablanca 1927 represented the most extended match of all time. In the past Kasparov has always gained fresh energy and drive from his wins, so it seems to me unlikely that the match will terminate in the next two games. Of .course, I could be wrong. However, Kasparov's overall position, trailing 1-5, must be hopeless, but we could well be within sight of a modest Kasparov revival. One thing is clear from this match; no Western sponsor could possible support this kind of unlimited struggle in the future. Fide will have to go back to a world championship format restricted to 24 or 30 games. In view of the length of the match the Fide Congress in Salonika has already decreed that the loser from Moscow will jump straight into the Candidates' semi- final. Accordingly Boris Spassky, the cele- brated former world champion, will take up the free place created in the 16-man Candidates' tournament.

After this game the announcement that Friday 15 December was a rest day because the hall had been booked by the Soviet Academy of Sciences fuelled speculation that this had been done to give Karpov a 'free' rest day. However these rumours were allayed when it was confirmed that

the booking was made a year in advance and the match had been expected to finish by now!

What about a chess computer for Christ- mas? I have had the opportunity to become closely associated with the latest models during a recent simultaneous display at Blackwell's bookshop in Oxford. As al- ways Fidelity programmes are excellent. The Sensory 12 and Elegance appear to have made a quantum leap in appearance

with a soft board, an especially attractive feature. In resourcefulness of play, the

program I met was certainly a match for most of the human opponents I faced that day. They are currently on offer at £398 for the Sensory 12 and £248 for the Elegance. SciSys machines are always outstanding and have been backed by no less than Kasparov. The latest is the Turbostar which will be available for Christmas at £199.99. Finally the strongest program available is almost certainly the Novag Super Constellation which performed so well in the 1984 Commonwealth cham- pionship. It is priced at £299.95. The

choice really depends on the strength of electronic opposition required. All these machines are available from Competence on 0491-34663.