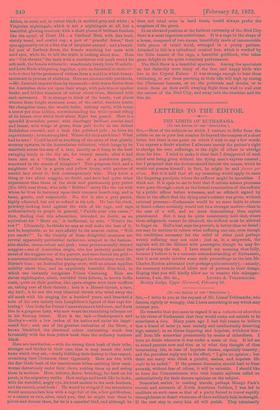 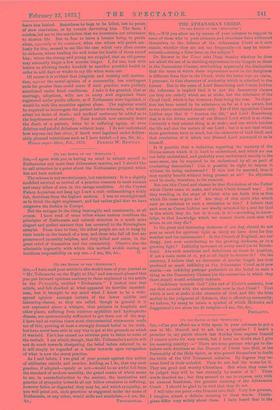 [TO THE EDITOR OF THH SPECTATOR:']

SIRS I write to you at the request of Mr. Lionel Tollemache, who fancies, rightly or wrongly, that I have something to say which may interest you.

He remarks that you seem to regard it as a reductio ad absurdum to his views of-Euthanasia that they would make out suicide to be sometimes a duty. Many years ago I had full reason to believe that a friend of mine (a man morally and intellectually deserving high esteem), in an illness lingering and hopeless, withdrew him- self from life somewhat prematurely by means of chloroform. I have no doubt whatever it was under a sense of duty. It led me to sound persons now and then as to what they thought of thus terminating life, in case of hopeless disease, especially insanity ; and the prevalent reply was to the effect, " I give no opinion ; but there are many who think a painful, useless, and hopeless life ought to be ended." If the present discussion should lead to freer avowals, without fear of odium, it will be valuable. I should like to have the Commissioners who visit lunatic asylums called on authoritatively for their sincere opinions on the subject.

Somewhat earlier, in reading travels, perhaps Mango Park's travels and accounts of North American Indians, I was led to meditate on such cases as that of a party forced to travel rapidly through forest or desert where one of them suddenly fails in strength. If the rest stay to carry him all will perish. They reluctantly

leave him behind. Sometimes he begs to be killed, lest he perish of slow starvation, or by vermin devouring him. The facts, I confess, led me to the conviction that we overstrain our reluctance to shorten life. But to fear to leave a human being to perish alone, especially at his command, when else others will perish use- lessly for him, seemed to me like the case which very often occurs in sickness, where tending the sick ruins the health of those round him; where the strong and young are crippled, that an old person may miserably linger a few months longer. I, for one, look with horror on allowing tender kinsfolk to sacrifice youthful health in order to add days or weeks to my life when worn-out.

Of course it is evident that irregular and stealthy self-destruc- tion, against the moral opinion of a community, has contingent evils far greater than could occur if such practice were publicly .sanctioned under fixed conditions. I take it for granted, that as 'marriage, adoptions, wills are in every well organised State registered under public officers, so if Euthanasia were legalised, it would be with like securities against abuse. The registrar would be required to interrogate the patient before witnesses, who would attest his desire of death ; and medical testimony be added as to the hopelessness of recovery. Near kinsfolk now earnestly desire the death of a patient, when he is suffering agony, or even delirium and painful delusions without hope. 1 do not understand tow anyone can fear abuse, if death were legalised under deliber- ately planned restrictions such as I have hinted.—I am, Sir, &c., Weston-super-Mare, Feb., 1873. FRANCIS W. NEWMAN.