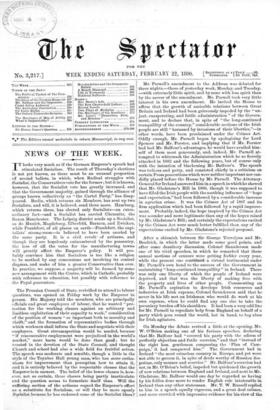 Page 1, 22 February 1890 — After a skirmish between Sir George Trevelyan and Mr. Brodrick,
Close

After a skirmish between Sir George Trevelyan and Mr. Brodrick,

in which the latter made some good points, and after some desultory discussion, Colonel Saunderson made one of his vivid speeches, in which he remarked that these annual motions of censure were getting feebler every year, while the present one contained a virtual testimonial under Mr. Parnell's own hand to the success of the Government in maintaining "long-continued tranquillity" in Ireland. There was only one liberty of which the people of Ireland were deprived, and that was the liberty of making free with the property and lives of other people. Commenting on Mr. Parnell's aspiration to develope Irish resources and industries at Irish expense, Colonel Saunderson said that he never in his life met an Irishman who would do work at his own expense, when he could find any one else to take the pecuniary burden off his shoulders. It had been a very odd line for Mr. Parnell to repudiate help from England on behalf of a party which goes round the world, hat in hand, to beg alms for Irish agitators.