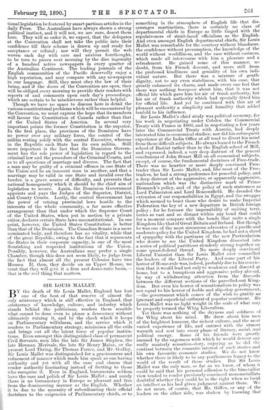 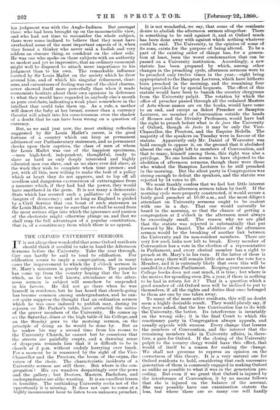 BY the death of Sir Louis Mallet, England has lost one of the best of that reserve of almost the only aristocracy which is still effective in England, that aristocracy of knowledge, culture, and industry which stands behind the politicians, renders them sensible what cannot be done even to please a democracy without ultimately ruining it, and by the check which it keeps on Parliamentary wilfulness, and the service which it renders to Parliamentary strategy, minimises all the evils and brings out all the latent force of popular institu- tions. Even amongst this distinguished class of permanent Civil Servants, men like the late Sir James Stephen, the late Herman Merivale, the late Sir Henry Maine, or the present Lord Thring, Sir Thomas Farrer, and Mr. Godley, Sir Louis Mallet was distinguished for a graciousness and refinement of manner which made him speak as one having authority and yet with all the ease and charm that render authority fascinating instead of fretting to those who recognise it. Even in England, bureaucrats seldom have the ease and polish of Sir Louis Mallet ; and surely there is no bureaucracy in Europe so pleasant and free from the domineering manner as the English. Whether it be due to the necessity of subordinating their official doctrines to the exigencies of Parliamentary chiefs, or to something in the atmosphere of English life that dis- courages martinetism, there is certainly no class of departmental chiefs in Europe so little tinged with the repulsiveness of strait-laced officialism as the English. And even amongst English departmental chiefs, Sir Louis Mallet was remarkable for the courtesy without blandness, the confidence without presumption, the knowledge of the world without worldliness, and the ease without easiness, which made all intercourse with him a pleasure and a refreshment. He gained some of this manner, no doubt, from his French descent, and more still from the profound kindliness and geniality of his own indi- vidual nature. But there was a mixture of gentle dignity, not to say even stateliness, with his ease, that greatly enhanced its charm, and made every one feel that there was nothing bourgeois about him, that it was not official life which gave him his air of frank authority, but his air of frank authority which had specially fitted him for official life. And yet he combined with this air of pleasant authority a simplicity and humility that added tenfold to his influence.

Sir Louis Mallet's chief study was political economy, for his work in negotiating under Cobden the Commercial Treaty with France in 1860, and in negotiating a few years later the Commercial Treaty with Austria, had deeply interested him in economical studies; nor did his subsequent experience at the India Office at all tend to divert his mind from these difficult subjects. He always leaned to the French school of Bastiat rather than to the English school of Mill, and expressed, indeed, a very deep distrust of the general conclusions of John Stuart Mill on all economical subjects, except, of course, the fundamental doctrines of Free-trade. There was no heartier or more deeply convinced Free- trader than Sir Louis Mallet, and, like most of the Free- traders, he had a strong preference for peaceful policy, and a deep distrust of the aggressive, or apparently aggressive, nationalism which was the distinctive mark of Prince Bismarck's policy, and of the policy of such statesmen as Lord Palmerston and Lord Beaconsfield. He dreaded the extension of our responsibilities in Egypt, and the swagger which seemed to beset those who desire to make Imperial Federation the key of a new departure in British foreign policy ; for he foresaw the impossibility of uniting terri- tories so vast and so distant within any bond that could for a moment compare with the bonds that unite a single Kingdom like that of Great Britain and Ireland. But though he was one of the most strenuous advocates of a pacific and moderate policy for the United Kingdom, he had not a shred of sympathy with the partisans of the new Particularism who desire to see the United Kingdom dissected into a series of political partitions slenderly strung together on some quasi-federal thread. No more deeply convinced Liberal Unionist than Sir Louis Mallet ever counselled the leaders of the Liberal Party. And some part of his horror of Home-rule was, indeed, probably due to his convic- tion that it would lead not only to weakness and discord at home, but to a bumptious and aggressive policy abroad, by way of withdrawing attention from the discords between the different sections of the parcelled-out King- dom. But even his horror of sensationalism in policy was not equal to his horror of feeble and slip-slop government, —the government which comes of the wish to gratify an ignorant and superficial outburst of popular sentiment. Sir Louis Mallet was no light weight in the scale of what may be properly termed the Whig Liberalism. Yet there was nothing of the dryness and coldness of the Whig about his mind. He drew about him men of the brightest humour, the richest culture, and the most varied experience of life, and entered with the utmost warmth and zest into every phase of literary, social, and political energy. Some of his friends were greatly amused by the eagerness with which he would devour any really masterly sensation-story, enjoying as he did the contrast between the romantic interest of such stories and his own favourite economic studies. We do not know whether there is likely to be any posthumous legacy to the world of the result of those studies. But Sir Louis Mallet was the only man, so far as we know, of whom it could be said that his personal adhesion to the bimetallist view tended to render previously convinced monometallists doubtful whether they could be in the right when so lucid an intellect as his had given judgment against them. We do not mean, of course, that Mr. Giffen, or any of the leaders on the other side, was shaken by knowing that his judgment was with the Anglo-Indians. But amongst those who had been brought up on the monometallic view, and:who had. not time to reconsider. the- whole subject., there were some inclined to believe that they must have overlooked some of the most important aspects of it, when they found a thinker who never said a foolish and very seldom an obscure thing, so confident on the other side. He was one who spoke on these subjects with an authority so modest and yet so impressive, that an ordinary economist might well be disposed to attach more importance to his judgment than to his own. The remarkable influence exerted by Sir Louis Mallet on the society which he drew around him, and of which his singular refinement, clear- ness, and earnestness of feeling was one of the chief charms, never showed itself more powerfully than when it made economists hesitate about their own opinions in deference to what they would have regarded in anybody else's mouth as pure crotchets, indicating a weak place somewhere in the intellect that could take them up. As a rule, a mother will desert the baby at her breast, sooner than a currency theorist will admit into his consciousness even the shadow of a doubt that he can have been wrong on a question of currency.

But, as we said just now, the most striking reflection suggested by Sir Louis Mallet's career, is the good fortune of a country which can keep as permanent advisers of our Parliamentary statesmen, and as permanent checks upon. their caprices, the class of men of whom Sir Louis Mallet was one of the happiest specimens, —men high-bred, independent, thoughtful, ready to slave as hard as only deeply interested and highly educated men can slave, and as no slave ever did slave, at the work they wish to complete when time presses ; and yet, with all this, men willing to make the best of a policy which at heart they do not approve, and to lop off all needless and dangerous excrescences of extravagance from a measure which, if they had had the power, they would have smothered in the germ. It is not many a democratic State which has secured such a palliative of the special dangers of democracy ; and so long as England is guided by a Civil Service that can boast of such statesmen as Sir Louis Mallet, we may be sure that we shall be saved from the most serious slips into which the ignorance and passion of the electorate might otherwise plunge us, and that we shall reap the full advantages of a popular constitution, that is, of a constitu( ncy from which there is no appeal.