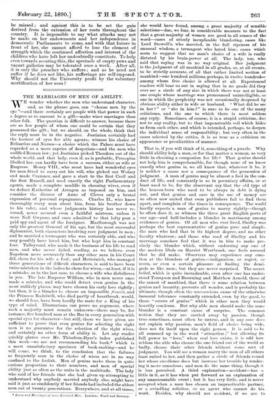 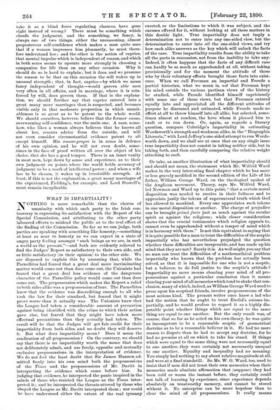 THE MARRIAGES OF MEN OF ABILITY.

WE wonder whether the men who understand character, and, as the phrase goes, can " choose men by the eye "—and there certainly are people with that power in such a degree as to amount to a gift—make wiser marriages than other folk. The question is difficult to answer, because there are so few people of whom one could be certain that they possessed the gift ; but we should, on the whole, think that the reply must be in the negative. Justinian certainly had the keenest of eyes for able agents; witness his choice of Belisarius and Narses—a choice which the Palace must have regarded as a mere caprice of despotism—and the men who codified Roman law ; yet Justinian picked Theodora out of the whole world, and that lady, even if, as is probable, Procopius libelled her, can hardly have been a success, either as wife or Empress. Henry who must have had wonderful eyes for men fitted to carry out his will, who picked out Wolsey and made Cra,nmer, and gave a start to the first Cecil and the first Russell, and used exactly the right Parliamentary agents, made a complete muddle in choosing wives, even if we deduct Katherine of Amnon as imposed on him, and consider the divorce of Anne of Cleves only a brutal expression of personal repugnance. Charles II., who knew thoroughly every man about him, from his brother down to his valet, and whose judgments history has never re- versed, never secured even a faithful mistress, unless it were Nell Gwynne, and once admitted to that lofty post a paid spy and agent of the foreigner. Marlborough was not only the greatest General of his age, but the most successful diplomatist, both characters involving rare judgment in men ; and he married a termagant who was certainly able, and who may possibly have loved him, but who kept him in constant fear. Talleyrand, who made it the business of his life to read men, and who never failed, reading, as we believe, even Napoleon more accurately than any other man in his Court did, chose for his wife a fool ; and Metternich, who managed three generations of difficult characters, is said to have been twice mistaken in the ladies he chose for wives,—at least, if it is a mistake, as in the last case, to choose a wife who disbelieves in you. The late Emperor William, who in men never once made a mistake, and who could detect even genius in the most unlikely places, may have chosen his early love rightly ; but then, it is a blunder to choose an impossible fiancee, and the Princess Radziwill, who died partly of heartbreak, would, we should fear, have been hardly the mate for a King of his type of mind. Illustrations can prove no argument, where such a majority must remain unknown—there may be, for instance, five hundred men at the Bar in every generation with special eyes for character—but still, those we have given are sufficient to prove that even genius for selecting the right men is no guarantee for the selection of the right wives, and certainly no other form of ability is. Let any reader quickly glance over Mr. Thiselton-Dyer's index published this week—we are not recommending his book,* which is a most unsatisfactory specimen of book-making—and he will come, we think, to the conclusion that the failures so frequently seen in the choice of wives are in no way confined to the foolish. Men of genius make them in quite curious proportion to their numbers, and men of special ability just as often as the units in the multitude. The lady who said of her friends that she had given up attempting to understand why anybody married anybody else, might have said it just as confidently if her friends had included the ablest men out of twenty generations. Everywhere, and at all times, • Lore, and Marriages of some Eminent Men. London : Ward and Downey. she would have -found, among a great majority of sensible -selections—due, we fear, in considerable measure to the fact that a great majority of women are good in all senses of the word—cases of utterly inexplicable blundering, cases like Lord Stowell's, who married, in the full ripeness of his unusual wisdom, a termagant who hated him ; cases which seem to suggest that no man's choice of a wife is really dictated by his brain-power at all. The lady, too, who said that saying was in no way original. Her judgment is the judgment of all mankind in all grades, or, at all events, to be strictly accurate, of all that rather limited section of mankind—one hundred millions, perhaps, in twelve hundred••-• among whom free choice is allowed at all. Experienced readers will bear us out in saying that in no grade did they ever see a circle of any size in which there was not at least one couple whose marriage was pronounced unintelligible, or one in which the perplexity was not occasionally deepened by obvious ability either in wife or husband. " What did he see in her F" or " she in him ?" is sure to be one of the many criticisms, and the one to which there is most seldom any reply. Sometimes, of course, it is a stupid criticism, due not to any reality, but to that impenetrable veil which hides us from each other, and which is intended, perhaps, to deepen the individual sense of responsibility ; but very often in the cases selected by the critics, it is as true as a criticism on appearance or peculiarities of manner.

That is, if you will think of it, something of a puzzle. Why should ability help a man, or for that matter a woman, so very little in choosing a companion for life ? That genius should not help him is comprehensible, for though none of us know exactly what genius is, we all know that, whatever it be, it is neither a cause nor a consequence of the possession of judgment. A man of genius may be almost a fool in the con- duct of life, and constantly is so in pecuniary affairs, or at least used to be, for the observant say that the old type of the heaven-born who used to be always in debt is dying out, and that genius and care in the use of money are so often now united that even publishers fail to find them apart, and complain of the times-in consequence. The world hardly expects a man of genius to marry rightly—though he often does it, as witness the three great English poets of our age—and half-includes a blunder in matrimony among evidences of genius. Of all men who ever lived, Shelley was perhaps the best representative of genius pure and simple, the man who had that in its highest degree, and no other faculty whatever; and those who read of Shelley and his marriage somehow feel that it was in him to make pre- cisely the blunder which, without endorsing any one of the modern libels on Harriet Westbrook, one feels assured that he did make. Observers may experience any emo- tion at the blunders of genius,—indignation, or regret, or scorn, or even a certain pleasure at finding the demi- gods so like men ; but they are never surprised. The secret belief, which is quite ineradicable, even after one has under- stood Tennyson and Browning and Matthew Arnold, three of the sanest of mankind, that there is some relation between genius and insanity, prevents all wonder, and is probably the ultimate, though often the unconscious cause of the otherwise immoral tolerance constantly extended, even by the good, to those " errors of genius " which in other men they would heartily condemn. But why able men should make the same blunder is a constant cause of surprise. The common notion that they are carried away by passion, though true sometimes, must often be untrue, and in any case does not explain why passion, men's field of choice being wide, does not fix itself upon the right person. It is said to be all summed up in the word " attraction ;" but allowing its full power to " love," when real love exists, it is odd how seldom the able who choose the one friend out of the world so badly, choose their other friends without some sort of judgment. You will see a woman marry the man of all others least suited to her, and then gather a circle of friends round her whose excellence does but increase her trouble by render. ing it more conscious ; and men do the same thing, though it is less perceived. A third explanation—accident—has a little in it, as it has when put forward as an explanation of any unaccountable event ; but it has very little, and is never accepted when a man has chosen an impracticable partner, or a swindling solicitor, or an agent who cannot do his work. Besides, why should not accident, if we are to

take it as a blind force regulating chances, have gone right instead of wrong? There must be something which clouds the judgment, and the something, we fancy, is always one of two things, either the unreasoning, almost preposterous self-confidence which makes a man quite sure that if a woman impresses him pleasantly, he must there- fore understand her; and the other is the action of caprice, that mental impulse which is independent of reason, and which in both sexes seems to operate more strongly in choosing a companion for life than on any other occasion. Why it should do so is hard to explain ; but it does, and we presume the reason to be that on this occasion the will wakes up in unusual strength ; that, in fact, caprice—by which we mean fancy independent of thought—would govern able men very often in all affairs, and in marriage, where it is rein- forced by will, does govern them. If that is the explana- tion, we should further say that caprice entered into a great many more marriages than is suspected, and becomes visible only in that moderate proportion in which unsuit- ableness is so great as to be patent to the whole world. We should ourselves, however, believe that the former cause, overweening self-confidence, was the main one. A man, some- how, who likes a woman always believes that he knows all about her, resents advice from the outside, and will not even consider circumstantial evidence patent to all except himself. His amour-propre is in arms in defence of his own opinion, and he will not even doubt, some- times in the face of proof written all over the object of his choice, that she has a good temper. There is an inner vanity in most men, kept down by sense and experience, as to their own judgment on points where the world holds accuracy of judgment to be a mark of intellectual power ; and when a wife has to be chosen, it wakes up in irresistible strength. At least, if this is not the explanation, a great many marriages of the experienced, Fielding's, for example, and Lord Stowell's, must remain inexplicable.