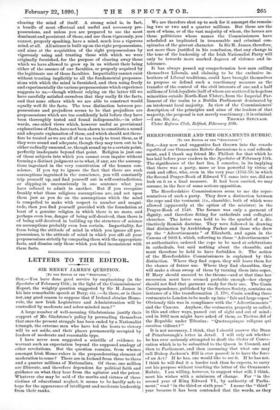 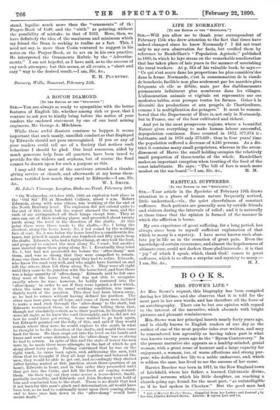 HEREFORDSHIRE AND THE ORNAMENTS RUBRIC.

SIR,—Any new and suggestive fact thrown into the crambe repetita of our Ornaments Rubric discussions is a real refresh- ment, and I thank my friend Mr. Phillott for that which he has laid before your readers in the Spectator of February 15th. The significance of the fact lies, I conceive, in its implying that there was a party, more or less powerful by virtue of rank and office, who, even in the very year (1552-53) in which the Second Prayer-Book of Edward VI. came into use, did not look on it as a final measure. It had been carried, we may assume, in the face of some serious opposition.

The Herefordshire Commissioners seem to me the repre- sentatives of such a party. They drew a distinction between the cope and the vestment (i.e., chasuble), both of which were allowed (apparently at the option of the minister) in the Prayer-Book of 1549. The former was only a garment of dignity, and therefore fitting for cathedrals and collegiate churches. The latter was held to be the symbol of a dis- tinctively Romish doctrine. They were followed in drawing that distinction by Archbishop Parker and those who drew up the " Advertisements " of Elizabeth, and again in the Canons of 1603-4, which, referring to those " Advertisements " as authoritative, ordered the cope to be used at celebrations in cathedrals, but said nothing about the chasuble, and must therefore be held to have forbidden it. The action of the Herefordshire Commissioners is explained by this distinction. Where they find copes, they will leave them for the chance of future use. Where they find chasubles, they will make a clean sweep of them by turning them into copes. If Mary should succeed to the throne—and at that time her • succession must have seemed probable enough—her clergy should not find that garment ready for their use. The Cosin Correspondence, published by the Surtees Society, contains an instance of a like transformation (I. 170), Cosin sending three vestments to London to be made up into " fair and large copes." Obviously this was in compliance with the "Advertisements " and the Canons. Anyhow, the vestments, properly so called, in this and other ways, passed out of sight and out of mind ; and in 1662 men might have asked of them, as Tacitus did of the Republic under Tiberius : " Quotusquisque reliquus qui casulam vidisset P " It is not necessary, I think, that I should answer the Dean of Peterborough's letter in detail. I will only ask whether

he has ever-seriously attempted to draft the Order of Convo-

cation which is to be submitted to the Queen in Council, and then to Parliament, and then (assuming that what one may call Bishop Jackson's Bill is ever passed) is to have the force of an Act? If he has, one would like to see it. If he has not, I think he will find it a harder task than he expects, to carry out his purpose without touching the letter of the Ornaments Rubric, I am willing, however, to suggest what will, I think, meet his wishes with a minimum of change. For " in the second year of King Edward VI., by authority of Parlia- ment," read " in the third or sixth year." I name the " third" year because it has been contended that the words, as they stand, legalise much more than the "ornaments" of th!. Prayer-Book of 1549, and the "sixth`" as pointing, without the possibility of mistake, to that of 1552. Here, then, we have definitely the idea of the maximum and minimum which my friend the Dean is seeking to realise as a fact. This, I need not say, is more than Cosin ventured to suggest in his notes on the Prayer-Book, or to act on in his own practice. He interpreted the Ornaments Rubric by the " Advertise- ments." I am not hopeful, as I have said, as to the success of any such attempts ; but this seems, at all events, a "short and easy " way to the desired result.—I am, Sir, &c.,