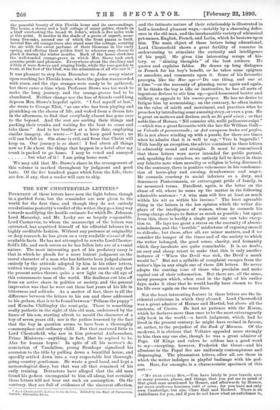 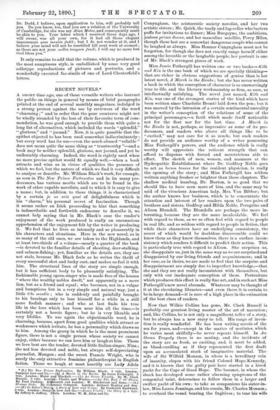 THE NEW CHESTER/ 1.ELD LETTERS.* FOURTEEN of these letters have

seen the light before, though in a garbled form, but the remainder are now given to the world for the first time, and though they do not entirely revolutionise posterity's verdict of the writer, they go a long way towards modifying the hostile estimate for which Dr. Johnson, Lord Macaulay, and Mr. Lecky are so largely responsible. Lord Carnarvon, to whom the manuscript of the letters was entrusted, has acquitted himself of his editorial labours in a highly creditable fashion. Without any pretence at originality or deep research, he has given us a very readable rjsumg of the available facts. He has not attempted to rewrite Lord Chester- field's life, and such errors as he has fallen into are of a venial nature. The most interesting part of his prefatory essay is that in which he pleads for a more lenient judgment on the moral character of a man who has hitherto been judged almost entirely by the attitude adopted by him in his other letters, written twenty years earlier. It is not too much to say that the present series throws quite a new light on the old age of this consummate man of the world. His deafness cut him off from an active share in politics or society, and the general impression was that he wore out these last years of his life in bitterness and solitude. As a matter of fact, there is all the difference between the letters to his son and those addressed to his godson, that is to be found between " Pelham the puppy " and Kenelm Chillingley the semi-prig. There is something really pathetic in the sight of this old man, undeterred by the fiasco of his son, starting afresh to mould the character of a boy of seven years old; nor is the pathos lessened by the fact that the boy in question seems to have been a thoroughly commonplace and ordinary child. But that mattered little to Lord Chesterfield, who saw in him potential Ambassadors, Prime Ministers,—anything, in fact, that he aspired to be. Alas for human hopes ! In spite of all his mentor's de- nunciation of Vandalism, young Stanhope signalised his accession to the title by pulling down a beautiful house, and speedily settled down into a very respectable but thorough- going country gentleman. He wrote a good hand, and kept a meteorological diary, but that was all that remained of his early training. Detractors have alleged that the old man found his godson uncongenial to him all along, but certainly those letters will not bear out such an assumption. On the contrary, they are full of evidences of the sincerest affection,

and the intimate nature of their relationship is illustrated in half-a-hundred pleasant ways,—notably by a charming defer- ence in the old man, and the inexhaustible variety of whimsical pet-names, English, French, and Latin, which he bestows upon him. The main object of these letters being educational,.

Lord Chesterfield shows a great fertility of resource in endeavouring to stimulate the curiosity and intelligence of his pupil. He gives him interesting scraps of his- tory, or " shining thoughts " of the best authors. He quotes and explains fables. He draws up long dialogues• in French for his boy's benefit, or he takes some epigram

or anecdote, and comments upon it. Some of his favourite precepts, like the Hoc age—" Do one thing, and one at• a time "—or the necessity of pleasing, recur again and again..

If he thinks the boy is idle or inattentive, he has all sorts of ingenious devices to stir him up,---good-humoured banter and raillery, or appeals to his amour-propre. He has no desire to- fatigue him by sermonising; on the contrary, he often insists on the value of mirth and merriment, and practises what he preaches by introducing some amusing story, or even a pun. He is great on mottoes and devices, such as Ne quid nimis ; or that noble line of Horace, "Nil conscire sibi, nu1121 pallescere —which was a great favourite with the late Sir William Gull— or Volendo et perseverando ; or Ant nunquam tentes ant perfice.

He is not above winding up with a puzzle, for there are times when he admits that it is well to say, " Vive la bagatelle ! With hardly an exception, the advice contained in these letters- is admirably sound and straight. It must be remembered. that these letters were never intended for public perusal,. and, speaking for ourselves, we entirely fail to detect in them any falsetto note when morality or religion is being discussed.

On the contrary, there is positive vehemence in his condemna- tion of horse-play and cursing, drunkenness and anger..

He counsels courtesy to social inferiors as a duty, and denounces Posteromania, or extravagant pride of family, in no measured terms. Excellent, again, is the letter on the abuse of wit, where he sums up the matter in the following admirable sentence : " A wise man will live at least as much within his wit as within his income." The least agreeable thing in the letters is the low opinion which the writer dis- plays of the intelligence of women, whom he counsels his young charge always to flatter as much as possible ; but apart from this, there is hardly a single point one can take excep- tion to. He lays too great a stress on the enormity of absent- mindedness, and the " terrible " misfortune of exposing oneself to ridicule; but these, after all, are minor matters, and if we consider the temper of the times and of the society to which the writer belonged, the good sense, charity, and humanity which they inculcate are quite remarkable. It is, no doubt,. an easy and cheap retort to make that this is only another instance of " When the Devil was sick, the Devil a monk

would be." But not a syllable of complaint escapes from the writer's lips in any single one of these 236 letters. He never

adopts the canting tone of those who proclaim and make capital out of their reformation. But there are, all the same,. many passages which, when read in the light of his earlier days, make it clear that he would hardly have chosen to live his life over again on the same lines.

Not the least interesting feature in these letters are the in- cidental criticisms in which they abound. Lord Chesterfield was a great admirer of Horace and Martial, but above all the ancients, of Cicero. He had no patience with the Koran, which he declares more than once to be the most extravagantly silly book in the world,—a harsh judgment, which, had he lived in the present century, he might have revised in favour,.

or, rather, to the prejudice of the Book of Mormon. Of the moderns, it is obvious that Voltaire appealed more strongly- to him than any one else, though be was a great admirer of Pope. Of Kings and rulers he seldom has a good word to say—excepting, however, Frederick the Great—and his allusions to the Papal See are uniformly contemptuous andi disparaging. The pleasantest letters, after all, are those in which the writer indulges in playful badinage with his god- son. Here, for example, is a characteristic specimen of this sort :—

"MY DEAR LITTLE BOY,—You have lately in your travels seen so many persons, places, and things, that you put me in mind of that great man mentioned by Homer, and afterwards by Horace, qui mores multorum hominum vidit et urbes ; for you have not only seen Cambridge, but also Clare Hall and Hockrel. There is am Anticlimax for you, and if you do not know what an anticlimax is,. Dr. Dodd, I believe, upon application to him, will probably tell you. Do you know, too, that you are a relation of the University of Cambridge, for she was my Alma Mater, and consequently mutt be akin to you. Your letter which I received three days ago, I will swear, was all your own, for it had all those elegant inaccuracys quas ineuria fudit ; but I do not wonder at it, and I believe your mind will not be resettled till next week at soonest; as these are not your *Ionia tempera fandi, I will say no more but God bless you."

It only remains to add that the volume, which is produced in the most sumptuous style, is embellished by some very good collotype reproductions of pictures and portraits, and a wonderfully executed fac-simile of one of Lord Chesterfield's letters.