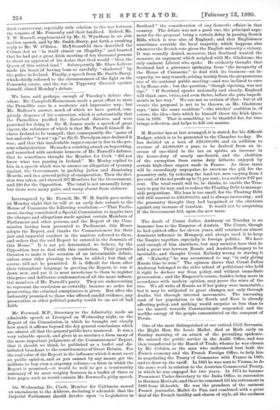 On Wednesday, Dr. Clark, Member for Caithness, moved an amendment

to the Address, declaring it advisable that the huperip,1 Parliament should dtwolve upon " p, Legislature in

Scotland " the consideration of any domestic affairs in that country. The debate was not a good one, the principal argu- ment for the proposal being a certain delay in passing Scotch Bills, which is true also of England ; and that Englishmen sometimes override the local majority, which happens also whenever the Scotch vote gives the English minority a victory. It was roundly denied, moreover, that Scotland wanted the measure, an argument which weighed with Mr. Gladstone, the only eminent Liberal who spoke. He evidently thought that Scotland had a grievance springing from "the incapacity of the House of Commons " to deal with its business—an in- capacity, we may remark, arising mainly from the preposterous size of the national public meeting—and was inclined to cure it by Home-rule ; but the question, " though ripening, was not ripe." " If Scotland speaks rationally and clearly, England will think once, twice, and even thrice, before she puts impedi- ments in her way." We are not so certain of that ; but at all events the proposal is not to be thrown, as Mr. Gladstone says, "into the same cauldron"—the witches' cauldron is, of course, the idea—into which he himself threw the Irish Ques- tion in 1886. That is something to be thankful for, for time brings reflection, and helps to kill out manias.