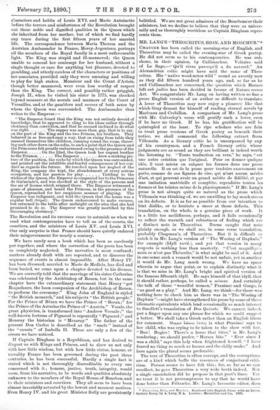 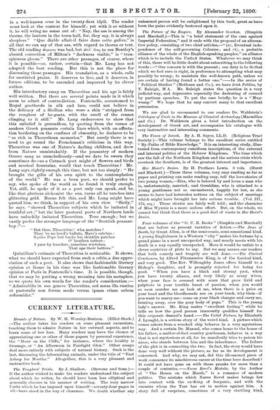 MR. LANG'S " THEOCRITUS, BION, AND MOSCHUS."* CHaucER has been

called the morning-star of English, and Theocritus may be called the evening-star of Greek poetry. He did not seem so to his contemporaries. He was out- shone, in their opinion, by Callimachus. Voltaire said of Le Sage,—" Qu'il vivra parcepill a du naturel." An Alexandrian critic might have said the same of Theo- critus. His " native wood-notes wild " sound as sweetly now as they did fifteen hundred years ago, and, so far as he and Callimachus are concerned, the question which Horace left sub judice has been decided in favour of Nature versus Art. We congratulate Mr. Lang on having written so fine a prose English version of an author so difficult to translate. A lover of Theocritus may now enjoy a pleasure like that which Gray dreamt for himself of reading eternal novels by Marivaux and Crebillon. A comparison of Mr. Lang's prose with Mr. Calverley's verse will gratify such a lover, even if he have no Greek. If he has, his gratification will be quintupled at the least. To ripe scholars who are fain to treat prose versions of Greek poetry as beneath their notice, we shall commend the following extract from Villemain. As a literary critic he is unsurpassed by any of his countrymen, and a French literary critic whose judgments are as sound as they are brilliant is indeed worth the listening to. " Toute traduction en vers," he says, " est une autre creation que l'original. Pour en downer quelque idee, it vaut mieux en calquer les formes dans une prose naturelle. 1.1 en est de in prose pour traduire exactement un poete, comme de ces figures de °ire, qui n'ont aucun merite d'art, et qui peuvent avoir un grand merite de fidelite, et par une imitation materielle et complete, reproduire toutes les formes et lea teintes meme de la physiognomie." If Mr. Lang's prose is not always quite so natural as the prose which Villemain was thinking of, we are unwilling to lay much stress on its defects. It is as far as possible from our intention to hint dislike, or to hesitate a sneer at those defects. This translation, on the whole, is a genuine piece of work. It is a little too mellifluous, perhaps, and it fails occasionally to reflect the warmth and robustness of feeling which are a distinct note in Theocritus. Burns caught that note plainly enough, as we shall see, in some verse translation, probably Chapman's, of Theocritus. But it is difficult to catch it in Mr. Lang's version of " The Wooing of Daphnis,' for example (Idyll xxvii.), and yet that version in many- respects is nothing less than masterly. " C'est magnifique, mais ce n'est pas Theocrite," is what might be said of it. And in one sense such a remark would be not unfair, yet in another it would do Mr. Lang much wrong. We have no space wherein to argue that point, or to explain distinctly what it• is that we miss in Mr. Lang's bright and spirited version of the famous fifteenth idyll. He says himself of that idyll, that it should rather, perhaps, be called a mimics. And certainly the talk of those " weariful women," Praxinod and Gorgo, is "as good as a play." And Mr. Lang, we think—for there was nothing here to cheek him as there was in " The Wooing of Daphnis "—might have strengthened his prose by some of those idiomatic equivalents which lend occasionally so much interest to Smollett's translation of Don Quixote. We cannot, indeed, put a finger upon any one phrase for which we could suggest a better. We shall take a Greek rather than an English idiom for comment. Mop ;Ci.141,£i iT. 1:0; is what Praxinoe says to her child, who was crying to be taken to the show with her. " Boo ! Bogies ! There's a horse that bites," is Mr. Lang's rendering ; we should prefer, " Horses bite." " Ever since I was a child," says this lady when frightened herself, " I have feared no thing so much as horses and the chilly snake." And here again the plural seems preferable.

The text of Theocritus is often corrupt, and the corruptions are of a kind which baffie the resources of conjectural criti- cism. Porson seems to have felt this ; for, so far as we can recollect, he gave Theocritus a very wide berth indeed. Not a single emendation did he propose in that poet's lines. Yet we trust it is not presumptuous to say that he would have• done better than Fritzsche, Mr. Lang's favourite editor, does

Theocritus, Bion, and Moschus. Rendered into English Prose. with an Intro- ductory Essay, by L. Lang, M A. London Macmillan and Co. 1889. in a well-known crux in the twenty-first idyll. The reader must look at the context for himself ; yet with it or without

it, he will wring no sense out of : " Nay, the ass is among the thorns, the lantern in the town-hall, for, they say, it is always

sleepless." " Que diable allait-il faire dans cette galere," is all that we can say of that ass, with regard to thorns or text. The old reading egulheros- was bad, but caw' (71,14, to use Bentley's

absurd correction of Milton's " darkness visible," is " tran- spicuous gloom." There are other passages, of course, where it is possible—or, rather, certain—that Mr. Lang has not adopted the best reading. But this is not the place for discussing those passages. His translation, as a whole, calls for unstinted praise. It deserves to live, and it deserves, in future editions, to be amended and improved by its clever author.

His introductory essay on Theocritus and his age is fairly well written. But there are several points made in it which seem to admit of contradiction. Fontenelle, accustomed to Royal goatherds in silk and lace, could not believe in the delicacy of a Sicilian who wore a skin " stripped from the roughest of he-goats, with the smell of the rennet clinging to it still." Mr. Lang endeavours to show that this unbelief is groundless, by quoting from the verses of modern Greek peasants certain lines•wbich, with an affecta- tion bordering on the confines of obscurity, he declares to be " so rich in Theocritean memories." But surely there is no need to go round the Frenchman's criticism in this way.

Theocritus was one of Nature's darling children, and drew from Nature unmistakably. If the peasantry of modern Greece sang as unmelodiously—and we dare be sworn they sometimes do—as a Catnach poet might of flowers and birds and musical fountains, would that touch Theocritus ? Mr. Lang says, rightly enough this time, but not too simply : " He brought the gifts of his own spirit to the contemplation of the world." He was a born poet, we should prefer to say, who spoke of the world as he found it truly enough.

Yet, still, he spoke of it as a poet only can speak, and he, like that glorious alchemist the sun, turns all he touches into glittering gold. Burns felt this, and Mr. Lang might have quoted him, we think, in support of his own view. " Sicily," he says, " showed Theocritus subjects which he imitated in truthful art ;" but the later pastoral poets of Northern lands have unluckily imitated Theocritus. True enough ; but we vastly prefer the stronger language of the " Scottish peasant- boy :"— "But thee, Theocritus ! wha matches ? They 're no herd's ballats, Maro's catches : Squire Pope but busks his skinklin patches 0' heathen tatters : I pass by hunders, nameless wretches, That ape their betters."

Quintilian's estimate of Theocritus is noticeable. It shows, what we should have expected from such a critic, a due appre- ciation of such a poet. It also shows that fashionable literary opinion at Rome in his time was like fashionable literary opinion at Paris in Fontenelle's time. It is possible, though, that we may be putting a wrong meaning into his metaphor, so we quote his own words for the reader's consideration :- " Admirabilis in suo genre Theocritus, sed musa illa rustica et pastoralis non forum modo vernm ipsam etiam urbem reformidat."