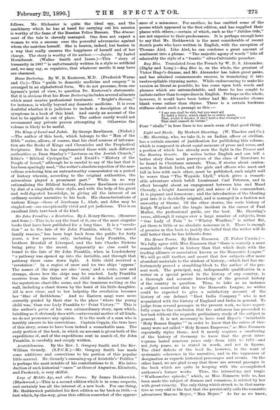 (Bemrose and Sons.)—This is, to say the least of it, one of the most singular books that have been published for a long time. It is a " revela- tion " as to the fate of Sir John Franklin, which, " for sacred family reasons," has been kept back from the public for forty years, a few persons only, including Lady Franklin, the brothers Horsfall of Liverpool, and the late Charles Dickens being privy to the secret. Apparently no clue could be found to the fate of Sir John Franklin, when in Londonderry " a pathway was opened up into the invisible, and through that pathway there came down light. A little child received a revelation !' In a region of snow and ice two ships 'appear.' The names of the ships are also seen,' and a route, new and strange, shows how the ships may be reached. Lady Franklin receives from the father of the child a detailed account of the mysterious chart-like scene, and the luminous writing on the wall, including a chart drawn by the hand of his little daughter. All is now clear, and to her ladyship the revelation becomes her Star of Bethlehem.' And no Eastern magi were more correctly guided by their star to the place where the young child was,' than was Lady Franklin to Point Victory.."' This is the author's précis of his own extraordinary story, upon which, bristling as it obviously does with controversial matter of all kinds, we do not pronounce any opinion. It is the work of a man who is terribly sincere in his convictions. Captain Coppin, the true hero of this story, seems to have been indeed a remarkable man. The early portion of the book, in which an account is given both of the expeditions of, and of the expeditions sent in search of, Sir John Franklin, is carefully and crisply written.