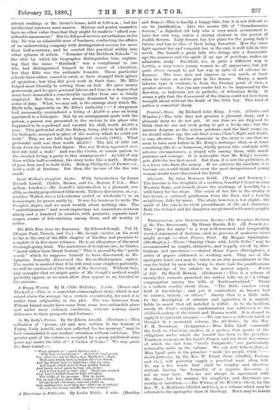 A Hurricane in Petticoats. By Leslie Keith. 3 vols. (Bentley

and Sons.)—This is hardly a happy title, but it is not difficult to see its justification. Into the serene life of " Grandmamma Severn," a dignified old lady who is very much accustomed to have her own way, enters a stormy element in the person of Judith Severn. Lady Severn has her plans for the young lady's future, and has no idea of their being thwarted. Ijow the stars fight against her and vanquish her in the end, is well told in this novel. She herself, a great lady who brings into a democratic age the manners and the spirit of an age of privilege, makes an admirable study. Excellent, too, in quite a different way is Letitia, a very bornee young woman to all appearance, but yet quite clever enough to get her way in spite of all adverse in- fluences. The hero does not impress us very much, at least when he takes an active part in the drama. Harry, a much inferior type of creature, is, from the literary point of view, a greater success. Nor can any reader fail to be impressed by the devotion, so ludicrous yet so pathetic, of Sebastian Holly. It seems a pity that the denouement of the drama could not have been brought about without the death of the little boy. This kind of pathos is somewhat cheap.