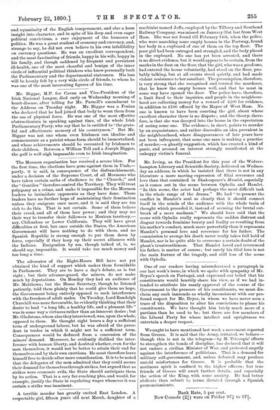 Page 3, 22 February 1890 — We ought to have mentioned last week a movement reported
Close

We ought to have mentioned last week a movement reported

from Greece. It is said that the Army, irritated, we believe— though this is not in the telegram—by M. Tricoupie efforts to strengthen the bonds of discipline, has declared that it will not endure a civilian Minister of War, and protested angrily against the interference of politicians. That is a demand for military self-government, and, unless defeated, may produce untold misfortunes for Greece. It is probable that the mutinous spirit is confined to the higher officers ; but true friends of Greece will await further details, and especially the action of the King, with some anxiety. He had better abdicate than submit tg terms dictated through a Spanish, pronunciamiento.