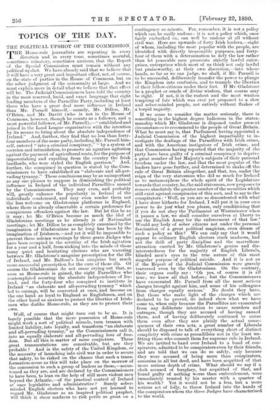 THE POLITICAL UPSHOT OF THE COMMISSION, THE Home-rule journalists are repeating in every direction and in every tone, sometimes scornful, sometimes minatory, sometimes anxious, that the Report of the Special Commission must remain without any political upshot. We have already said that we believe that it will have a very great and important effect, not, of course, on the state of parties in the House of Commons, but on the sober judgment of the community at large. And we must explain more in detail what we believe that that effect will be. The Judicial Commissioners have told the country in the most reserved, lucid, and exact language that eight leading members of the Parnellite Party, including at least three who have a great deal more influence in Ireland than Mr. Parnell himself, —namely, Mr. Dillon, Mr. O'Brien, and Mr. Davitt (who is not in the House of Commons, however, though he counts as a follower, and a most powerful follower, of Mr. Parnell),—" established and joined in the Land League organisation with the intention by its means to bring about the absolute independence of Ireland." And, further, they find that no less than forty- four members of the same party, including Mr. Parnell him- self, entered " into a criminal conspiracy," " by a system of coercion and intimidation, to promote an agrarian agitation against the payment of agricultural rents, for the purpose of impoverishing and expelling from the country the Irish landlords, who were styled the English garrison." And, further, the conspiracy in question is stated by the Com- missioners to have established an " elaborate and all-per- vading tyranny." These conclusions may be as unimportant as any one pleases to suppose in diminishing the political influence in Ireland of the individual Parnellites named by the Commissioners. They may even, and probably will, greatly enhance the popularity in Ireland of the individuals condemned, and may even render them not the less welcome on Gladstonian platforms in England, where there is already observable a certain preference for conspicuous offenders against the law. But let this be as it may ; let Mr. O'Brien become as much the idol of Gladstonian meetings as he already is of Nationalist meetings ; let Mr. Dillon be as completely canonised by the imagination of Gladstonians as he long has been by the imagination of Irishmen,—and yet it will be impossible to prevent these solemn warnings by three grave Judges who have been occupied in the scrutiny of the Irish agitation for a year and a half, from sinking into the minds of those many quiet and hesitating electors who are wavering between Mr. Gladstone's sanguine prescription for the ills of Ireland, and Mr. Balfour's less sanguine but much more successful prescription for the cure of those ills. Of course the Gladstonians do not cease crying out that, so soon as Home-rule is gained, the eight Parnellites who contemplated securing the absolute independence of Ire- land, and the forty-four who conspired to institute in Ireland " an elaborate and all-pervading tyranny " which led to outrage, will be converted at once, and become on the one hand as loyal to England as Englishmen, and on the other hand as anxious to protect the liberties of Irish- men who dislike Home-rule, as they are to protect their own.

Well, of course that might turn out to be so. It is barely possible that the mere possession of Home-rule might work a sort of political miracle, turn treason with limited liability, into loyalty, and transform "an elaborate and all-pervading tyranny," as the Commissioners call it, into an equally elaborate and all-pervading love of free- dom. But all this is matter of mere conjecture. These great transmutations are conceivable, but are they probable ? And is the safety of the United Kingdom, or the necessity of launching into civil war in order to secure that safety, to be risked on the chance that such a trans- formation-scene as this will take place on the morrow of the concession to such a group of leaders as these,—accus- tomed as they are, and are declared by the Commissioners to have been, to lean on the help of still more violent men beyond the Atlantic,—of the practical control of Ireland at once legislative and administrative ? Surely sober- minded English electors who have not vet learned to regard Mr. Gladstone as an inspired political prophet, will think it sheer IIISAMse to risk perils so great on a contingency so minute. For, remember, it is not a policy which can be easily undone : it is not a policy which, once fairly embarked on, can well be undone at all without civil war. Here are upwards of forty Irish leaders,—eight. of whom, including the most popular with the people, are identified with directly treasonable purposes, and forty- four of them with a determination to defy the law rather than let peaceable men prosecute strictly lawful enter- prises, enterprises which most of us think not only lawful but praiseworthy, at their own discretion,—into whose hands, so far as we can judge, we shall, if Mr. Parnell is to be successful, deliberately transfer the power to plunge the Kingdom into confusion, and to trample the liberties of their fellow-citizens under their feet. If Mr. Gladstone be a prophet or oracle of divine wisdom, that course may be right. If not, it is the rashest and the most wanton• tempting of fate which was ever yet proposed to a slow and sober-minded people, not entirely without flashes of a-torpid sagacity.

If we come to consider the matter seriously, there is something in the highest degree ludicrous in the states- manship which Mr. Gladstone is disposed under present circumstances to recommend to the people of Great Britain.. What he must say is, that Parliament having appointed a. Judicial Commission of the highest impartiality to in- vestigate the dealings of the Parnellites with Irish crime, and with the American instigators of Irish crime, and that Commission having reported that the majority of the party have been guilty of a criminal conspiracy to deprive a great number of her Majesty's subjects of their personal freedom under the law, and that the most popular of the leaders have gone further, and determined to shake off the rule of Great Britain altogether, and that, too, under the reign of the very statesman who did so much for Ireland as to metamorphose the whole spirit of the Legislature towards that country, he, the said statesman, now proposes to remove absolutely the greater number of the securities which still exist against conspiracies of this sort, and to say to the conspirators : Well, as you are so discontented with what I have done hitherto for Ireland, I will put it in your own power to do just what you please, only conditioning that if you do not obey the Parliament at Westminster when it passes a law, we shall consider ourselves at liberty to- use the English Army for the enforcement of that law? Would any body of sober citizens not under the personal fascination of a great political magician, even dream of such a policy as this ? We can only say that it would. appear to ordinary English electors stark madness, had not the drill of party discipline and the marvellous. attraction exerted by Mr. Gladstone's genius and dis- interestedness for the majority of English Liberals, blinded men's eyes to the true nature of this most singular purpose of political suicide. And it is not as if the Report of the Judicial Commission were gravely traversed even by the Gladstonians. On the contrary,. their organs coolly say : Oh yes, of course it is all true ; we knew all that before; but the Commissioners. have exonerated Mr. Parnell from all the most serious. charges brought against him, and some of his colleagues. from charges equally serious.' No doubt they have. But those who make light of the charges which are declared to be proved, do indeed show what we have come to, when only because the Parnellites are exonerated from any deliberate intention to cause murders and outrages, though they are accused of having caused them, and of having deliberately continued to cause them even after they saw plainly the actual conse- quences of their own acts, a great number of Liberals should be disposed to talk of everything short of distinct complicity with crime as peccadilloes not in the least un- fitting those who commit them for supreme rule in Ireland. We are invited to hand over Ireland to a band of con- spirators, admitted to be conspirators even by their friends. and are told that we can do so safely, only because they were accused of being more than conspirators, assassins in all but deed, and have been acquitted of that more serious depth of crime. What should we say if a. clerk accused of burglary, but acquitted of that, and found guilty of nothing worse than embezzlement, were immediately trusted by his master with a quarter of his wealth ? Yet it would not be a less, but a more serious act of folly, to throw Ireland into the hands of the conspirators whom the three Judges have characterised to the world.