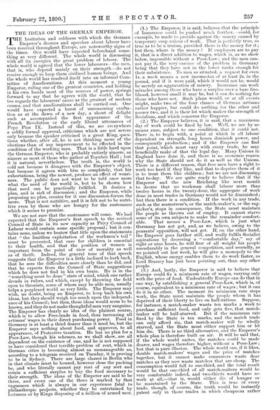 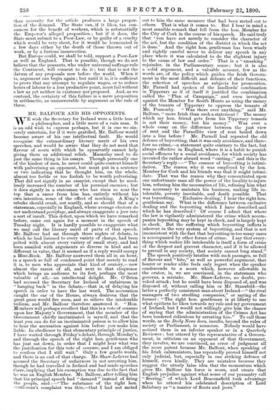 THE IDEAS OF THE GERMAN EMPEROR.

THE hesitation and coldness with which the German Emperor's decrees and speeches about labour have been received throughout Europe, are noteworthy signs of the times. One would have expected beforehand some- thing so very different. The whole world is discussing with all its energies the great problem of labour. The whole world is agreed that the lower labourers—the men, that is, who depend mainly on their strength—do not receive enough to keep them civilised human beings. And the whole world has resolved itself into an informal Com- mittee of Ameliorations. At this moment a young Emperor, ruling one of the greatest countries, and holding in his own hands most of the sources of power, springs forward to say that he agrees with the world, that he too regards the labourers' cause as the greatest of modern causes, and that ameliorations shall be carried out. One would have expected a burst of unreasoning exulta- tion as at the dawn of a new day, a shout of delight such as accompanied the first appearance of the French Revolution or the early liberal utterances of Pope Pius IX. Instead of this, we see everywhere a coldly formal approval, criticisms which are not severe only because the speaker criticised is a great King, ques- tions whether, after all, he is not thinking more of the elections than of any improvement to be effected in the condition of the working man. That is a little hard upon the German Emperor, who is probably entirely sincere, as sincere as most of those who gather at Toynbee Hall ; but it is natural, nevertheless. The truth is, the world is cold not because it disagrees with the Emperor's object, but because it agrees with him so completely, that his exhortations, being the newest, produce an effect of weari- ness. The public does not want to be told once more what the need of the world is, but to be shown how that need can be practically fulfilled. It desires a plan, and is sick of discussion ; and the Emperor, while proposing no plan, creates for it one discussion-forum the more. That is not nutritive, and it is felt not to be nutri- tive even by those who are hungry for the sustenance which it seems to promise.

We are not sure that the sustenance will come. We had expected that the Emperor's first speech to the revived Council of State in its new capacity as Privy Council of Labour would contain some specific proposal; but it con- tains none, unless we bestow that title upon the statements that " the limitless exploitation of the workmen's toil " must be prevented, that care for children is essential to their health, and that the position of women is important from the point of view of morality as well as of thrift. Indeed, the general tone of that speech suggests that the Emperor is a little inclined to hark back, that he sees the difficulties more clearly than he did, and that he expects from the Council of State suggestions which he does not find in his own brain. He is in the " something must be done " state of mind, which one rather dreads in rulers, and which, except by throwing the field open to theorists, some of whom may be able men, usually helps a perplexed world so very little. The Emperor may wish, no doubt, being an Emperor, to keep back his own ideas, lest they should weigh too much upon the independ- ence of his Council; but then, these ideas would seem to be known, and they do not make thoughtful men very sanguine. The Emperor has clearly no idea of the plainest course, which is to allow Free-trade in food, thus increasing all artisans' wages in their direct purchasing power. Food in Germany is at least a third dearer than it need be, but the Emperor says nothing about food, and approves, to all appearance, of Protective taxation. He has no plan for a Poor-Law, though his schemes, as we shall show, are all dependent on the existence of one, and he is not supposed to have considered that terrible problem of rent, which in German cities is becoming almost as unmanageable as, according to a telegram received on Tuesday, it is proving to be in Sydney. There are large classes in Berlin who in that climate must be housed, however close the packing be, and who literally cannot pay rent of any sort and retain a sufficient surplus to buy the food necessary to their strength. The ideas of the Emperor are said to be three, and every one of the three is marked by that vagueness which is always in our experience fatal to philanthropic projects, whether they be entertained by lecturers or by Kings disposing of a million of armed men. (1.) The Emperor, it is said, believes that the principle of Insurance could be pushed much further,—could, for example, be made to provide against the misery caused by temporary suspensions of work. That is perfectly true, so true as to be a truism, provided there is the money for it ; but then, where is the money ? If employers are to pay it, that is a direct addition to wages, which is, as we show below, impossible without a Poor-Law ; and the men can- not pay it, the very essence of the problem in Germany being that they have not in the lower ranks enough for their subsistence. To men so situated, a request for even Is. a week means a new income-tax of at least 2s. iu the pound, and if it were paid, which it would not be, would be merely an aggravation of misery. Insurance can work miracles among those who have a surplus over a bare live- lihood, however small it may be, but it can do nothing for those who have not. Such plans would, or at all events might, make two of the four classes of German artisans rather happier, but could do nothing for the other and poorer two, and it is their lot which makes the strength of Socialism, and which concerns the Emperor.

(2.) The Emperor believes, it is said, that a maximum day of work could be fixed by law. Well, we are by no means sure, subject to one condition, that it could not. There is, to begin with, a point at which in all labour dependent on strength, long hours diminish power, and consequently production ; and if the Emperor can find that point, which must vary with every trade, he may beneficially make of that the legal day. Many Unions in England have done it, and there is no economic reason why the State should not do it as well as the Unions. There is a different reason, that free men have a right to work too hard if they like, and that to deprive them of it is to treat them like children ; but we are not discussing that to-day. We are quite ready to believe that if the Emperor and the new Reichstag like next month to decree that no workman shall labour more than twelve hours in the twenty-four, the aggregate of work done in most trades in Germany would not be diminished ; but then there is a condition. If the work in any trade, such as the seamstress's, or the match-maker's, or the rag- picker's, stops in consequence, the State must maintain the people so thrown out of employ. It cannot starve some of its own subjects to make the remainder comfort- able. That means a Poor-Law, which is just what Germany has not got, and, as we believe, owing to the peasants' opposition, will not get. If, on the other hand, the Emperor goes farther still, and really fulfils Socialist aspirations by decreeing a " comfortable day," say of eight or nine hours, he will first of all weight his people unendurably in the general competition, and secondly, as we pointed out last week, he will give a monopoly to the English, whose energy enables them to do work faster, as Lord Brassey has just been pointing out, than any other people.

(3.) And, lastly, the Emperor is said to believe that Europe could fix a minimum rate of wages, varying only with the price of food. Undoubtedly Europe can do that in one way, by establishing a general Poor-Law, which is, of course, equivalent to a minimum rate of wages ; but it can do it in no other. The moment its minimum rate stops work, the State must maintain the people whom it has deprived of their liberty to live on half-rations. Suppose, for instance, a match-maker wants ten marks a week to purchase sufficient food, and only gets five, that match- maker will be half-starved. But if the minimum rate fixed by the State is ten marks, and the match trade can only afford six, that match-maker will be wholly starved, and the State must either support him or let him die. There is no third alternative, and the Emperor's whole plan is therefore built on air. It will be said that, if the whole world unites, the matches could be made dearer, and wages therefore higher, without a Poor-Law ; but that is pure illusion. The whole world can, if it likes, double match-makers' wages and the price of matches together, but it cannot make consumers waste dear matches as they now waste matches that are cheap. The consumption would fall to one-third, and the total result would be that one-third of all match-makers would be very comfortable indeed, and two-thirds would have no work at all,—that is, would either die of hunger or be maintained by the State. This is true of every trade, though, of course, the truth would be instantly patent only in those trades in which cheapness rather than necessity for the article produces a large propor- tion of the demand. The State can, if it likes, tax con- sumers for the benefit of workers, which is substantially the Emperor's alleged proposition ; but if it does, the State must submit to a Poor-Law, or be guilty of a cruelty which would be very short, for it would be terminated in a few days either by the death of those thrown out of work, or by a furious insurrection. But Europe could, we shall be told, support a Poor-Law as well as England. That is possible, though we do not believe that the peasants, who under universal suffrage rule the Continent, will consent to do it ; but that is not the datum of any proposals now before the world. When it is, argument can begin again ; but until it is, it is sufficient to prove that any attempt to regulate wages, or to reduce hours of labour to a less productive point, must fail without a law as yet neither in existence nor proposed. And, as we contend, the certainty of this failure is a mere proposition in arithmetic, as unanswerable by argument as the rule of three.