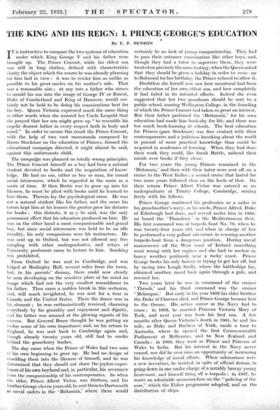 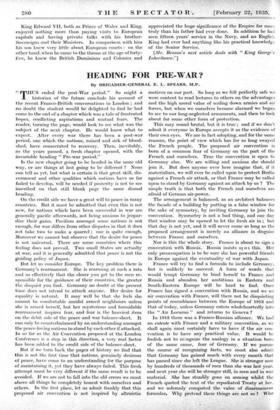 THE KING AND HIS REIGN: I. PRINCE GEORGE'S EDUCATION

I: is instructive to compare the two systems of education under which _King George V and his father were brought up. The Prince Consort, while his eldest son was still in long clothes, defined with characteristic clarity the object which the course he was already planning for him had in view: it was to render him as unlike. as possible to his great-uncles on his mother's side. That was a reasonable aim ; at any .rate a father who strove to mould his son into the image of George IV or Ernest, Duke of Cumberland and King of Hanover, would cer- tainly not be held to be doing his conscientious best for his boy. Queen Victoria expressed much the same thing in other words when she assured her Uncle Leopold that she prayed that her son might grow up "to resemble his angelic dearest father in every respect both in body and mind." In order to secure this result the Prince Consort, with the help of two vast memoranda composed by Baron Stockmar on the education of Princes, formed the educational campaign directed, it might almost be said,- against this unfortunate child.

The campaikn was planned on totally wrong principles. The Prince Consort himself as a boy had been a natural student devoted to books and the acquisition of know- ledge. He had no use, either as boy or man, for casual social intercourse, which he regarded in the main as a waste of time. If then Bertie was to grow up into his likeness, he must be plied with books until he learned to love them. Therein lay the psychological error. He was not a natural student like his father, and the more his tutors kept him at his lessons the greater grew his distaste for books : this distaste, it m ly be said, was the only permanent effect that his education produced on him. He was on the other hand a most companionable and genial boy, but since social intercourse was held to be an idle frivolity, his only companions were his instructors. He was sent up to Oxford, but was not allowed any free mingling with other undergraduates, and relays of University professors came to lecture to him. Smoking was prohibited.

From Oxford he was sent to Cambridge, and was lodged at Madingley Hall, several miles from the town, but, to his parents' dismay, there could now clearly be seen developing on the sensitive plate of his mind an image which had not the very smallest resemblance to his father. Then came a sudden break in this seclusion, and, still much invigilated, he was sent for a tour in Canada and the United States. There the dunce was in his element; he was enthusiastically received, charming everybody by his geniality and enjoyment and dignity, and his father was amazed at the glowing reports of his success. But General Bruce thought he was getting an undue sense pf his own importance and, on his return to England, he was sent back to Cambridge again and; though already twenty years old, still had to smoke behind the gooseberry bushes. - The day came when the Prince of Wales had two sons of his own beginning to grow up. He had no design of moulding -them into the likeness of himself, and he was determined that they should not share the joyless exper- iences of his own boyhood and, in particular, his severance from the companionship of his contemporaries. So when the elder, Prince Albert Victor, was thirteen, and his brother George eleven years old, he sent them to Dartmouth as naval cadets in the Britannia,' where 'there would certainly be no lack of young companionship. They had to pass their entrance examination like other boys, and, though they had a tutor to supervise them, they were treated on precisely the same footing; when the Queen asked that they should be given a holiday in, order to come up to Balmoral for her birthday, the Prince refused to allow it. Doubtless she herself now saw how unnatural had been the education of her own eldest son, and how completely it had failed in its intended effects. Indeed she even suggested that her two grandsons should be sent to a public school, naming Wellington College, in the founding of Which the Prince Consort had taken so great an interest. But their father preferred the 'Britannia,' for his own education had made him book-shy for life, and there was too much book-learning at schools. The best education for Princes (pace Stockmar) was free contact with their contemporaries and a judicious knocking about the world in pursuit of more practical knowledge than could be acquired in academies of learning. When they had done their work they could, like Sarah Battle, unbend their minds over books if they chose. - For two years the young Princes remained in the 'Britannia,' and then with their tutor were sent off on a cruise to the West Indies : a second cruise that lasted for two more years followed close on the heels of that. On their return Prince Albert Victor was entered as an undergraduate at Trinity College, Cambridge, mixing freely with his fellows.

Prince George continued his profession as a sailor in his grandmother's navy, as his uncle, Prince Alfred, Duke of Edinburgh had done, and served under him in MSS, on board the Thunderer ' in the Mediterranean fleet. His first command was of torpedo boat No. 79, when he was twenty-four years old, and when in charge of her he performed a very gallant adventure in rescuing another torpedo-boat from a dangerous position. During naval manoeuvres off the West coast of Ireland something went wrong with her engines and she had to anchor in heavy weather perilously near a rocky coast. Prince George broke his only hawser in trying to get her off, but by racing into Lough Swilly, where the battleships lay, obtained another, raced back again through a gale, and rescued her.

Two years later he was in command of the cruiser 'Thrush,' and his third command was the cruiser Melampus.' But early in the year 1892 his elder brother the Duke of Clarence died, and Prince George became heir to the throne. His active career in the Navy had to cease ; in 1893, he married Princess Victoria Mary of Teek, and next year was born his first son. A few months after Queen Victoria's death in 1901, he and his wife, as Duke and Duchess of York, made a tour to Australia, where he opened the first Commonwealth Parliament at Melbourne, and to New Zealand and Canada : in 1905, they went as Prince and Princess of Wales to India. But his interest in the Navy never ceased, nor did he ever miss an opportunity of. increasing his knowledge of naval affairs. When submarines were a newinvention, he insisted, in spite of official demur, in going down in one under charge of a notably breezy young lieutenant, and himself firing off a torpedb in 1907, he wrote an admirable memorandum on the "policing of the seas," -Which the Fisher programme adopted, and on the distribution of ships. King Edward VII, both as Prince of Wales and King, enjoyed nothing more than paying visits to European capitals and having private talks with his brother- Sovereigns and their Ministers. In comparison with him his son knew very little about European courts : on the other hand, when he came to the throne at the age of forty- five, he knew the British Dominions and Colonies and appreciated the huge significance of the Empire far more truly than his father had ever done. In addition he had seen fifteen years' service in the Navy, and no English King had ever had anything like his practical knowledge of the Senior Service.