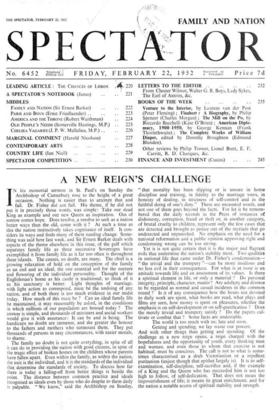 IN his memorial sermon in St. Paul's on Sunday the . Archbishop of Canterbury rose to the height of a great occasion. Nothing is easier than to attempt that and fail. Dr. Fisher did not fail. His theme, if he did not put it in precisely those words, was simple : Take our dead King as example and our new Queen as inspiration. Out of sorrow comes hope. Does resolve, a resolve to seek as a nation better ways than the old, come with it ? At such a time as this the nation instinctively takes cognisance of itself. It con- siders its ways and finds many of them needing change. Some- thing was said here last week, and Sir Ernest Barker deals with aspects of the theme elsewhere in this issue, of the gulf which separates family life as three successive Sovereigns have exemplified it from family life as it far too often is throughout these islands. The causes, no doubt, are many. The chief is a growing relaxation of hold on the conception of the family as an end and an ideal, the one essential soil for the nurture and flowering of the individual personality. Thought of the Englishman's home as his castle is traditional; to think of it as his sanctuary is better. Light thoughts of marriage, with light action to correspond, must b6. the undoing of any nation, and of both there is too much evidence in our midst today. How much of this must be ? Can an ideal family life be maintained, it may reasonably be asked, in the conditions in which millions of our population are housed today ? The answer is simple, and thousands of ministers and social workers would give it with assurance: It can be and is being. The handicaps no doubt are immense, and the greater the honour to the fathers and mothers who surmount them. They put thousands of persons in easy circumstances, with easier morals, to shame.

The family no doubt is not quite everything, in spite of all it can do in providing the nation with good citizens, in spite of the tragic effect of broken homes on the children whose parents have fallen apart. Even within the family, as within the nation, the unit is the individual, and it is the standards of the individual that determine the standards of society. To discuss how far there is today a falling-off from better things is beside the point. The distance between common practice and ideals recognised as ideals even by those who do despite to them daily is palpable. " We know," said the Archbishop on Sunday, " that morality has been slipping or is unsure in home discipline and training, in fidelity to the marriage vows, in honesty of dealing, in strictness of self-control and in the faithful doing of one's duty." These are measured words, and not one of them goes beyond the facts. For let it be remem- bered that the daily records in the Press of instances of dishonesty, corruption, fraud or theft or, in another category, of brutal cruelty to children, represent only the few cases that are detected and brought to justice out of the myriads that go undetected and unpunished. No emphasis on the need for a national reformation and a public opinion approving right and condemning wrong can be too strong. Yet it is not quite certain that it is the major and flagrant evils that undermine the nation's stability most. Two qualities in national life that came under Dr. Fisher's condemnation- " the trivial and the trumpery "—can be more insidious and no less evil in their consequences. For what is at issue is an attitude towards life and an assessment of its values. Is there a spiritual element in life, or only a material ? Do personal integrity, principle, character, matter? Are adultery and divorce to be regarded as normal and casual incidents in the common round ? Is it of any consequence how the hours not devoted to daily work are spent, what books are read, what plays and films are seen, how money is spent on pleasures, whether the emphasis is on self-development or on self-gratification ? Does the merely trivial and trumpery satisfy ? Do the papers cul- tivate or combat that ? Some facts are undeniable. The world is too much with us; late and soon, Getting and spending, we lay waste our powers.

And with other things than getting and spending. Of the challenge as a new reign opens, a reign charged with the hopefulness and the opportunity of youth, every thinking man and woman, and even those to whom that exercise is not habitual, must be conscious. The call is not to what is some- times characterised as a drab Victorianism or a repellent puritanism (unjust though that epithet largely is). It is to self- examination, self-discipline, self-sacrifice and, if the example of a King and the Queen who has succeeded him is not too high to follow, of self-dedication. That does not mean the impoverishment of life; it means its great enrichment; and for the nation a notable access of spiritual stability and strength.