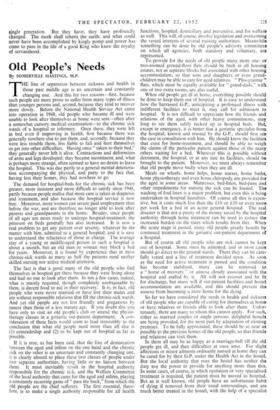 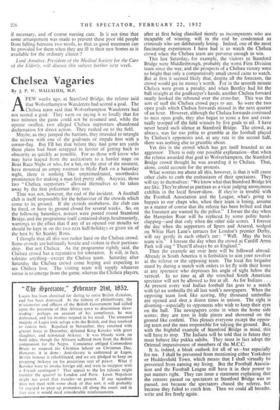 THE line of separation between sickness and health in those past middle age is an uncertain and constantly changing one. And this for two reasons—first, because such people are more prone to suffer from many types of illness than younger persons and, second, because they tend to recover more slowly. Before the National Health Service Act came into operation in 1948, old people who became ill and were unable to look after themselves at home were sent—often after a somewhat cursory medical examination—to the chronic sick wards of a hospital or infirmary. Once there, they were left in bed even if improving in health, first because there was generally nowhere else to put them, and, secondly, because they were less trouble there, less liable to fall and hurt themselves or get into other difficulties. Having once " taken to their bed," they generally never left it alive. Contractions and deformities of arms and legs developed; they became incontinent, and, what is perhaps more strange, often seemed to have no desire to leave the hospital. This was due partly to a general mental deteriora- tion accompanying the physical, and party to the fact that, having lost their homes, they had nowhere to go.

The demand for hospital-beds for the chronic sick has been greater, more insistent and more difficult to satisfy since 1948, partly because people realise that more care is taken in diagnosis and treatment, and also because the hospital service is now free. Moreover, more women can secure paid employment than before the war, and are therefore no longer able to look after parents and grandparents in the home. Besides, since people of all ages are more ready to undergo hospital-treatment, the pressure on beds generally has also increased. It is now a real problem to get any patient over seventy, whatever be the matter with him, admitted to a general hospital, and it is easy to understand the reluctance of those in charge. The average stay of a young or middle-aged person in such a hospital is about a month, but an old man or woman may block a bed for years. Moreover, it is found by experience that in most chronic-sick wards as many as half the patients need neither skilled nursing nor active medical attention.

The fact is that a good many of the old people who find themselves in hospital get there because they were living alone and had no one to look after them. In not a few cases, indeed, what is mainly 'required, though completely unobtainable by them, is decent food to aid in their recovery. It is, in fact, old people who were never married or have lost their mates and are without responsible relations that fill the chronic-sick wards. And yet old people are not less friendly and gregarious by nature than those of a less mature age. If you doubt this you have only to visit an old people's club or attend the physio- therapy classes in a geriatric out-patient department. A con- sideration of these facts would seem to lead irresistibly to the conclusion that what old people need more than all else is (1) comradeship and (2) to be kept out of hospital as far as possible.

If it is true, as has been said, that the line of demarcation between the aged and infirm on the one hand and the chronic sick on the other is an uncertain and constantly changing one, it is clearly absurd to place these two classes of people under two separate authorities, having little or no liaison between them. It must inevitably result in the hospital authority responsibile for the chronic sick, and the Welfare Committee of the local authority that cares for the aged and infirm, playing a constantly recurring game of " pass the buck," from which the old people are the chief sufferers. The first essential, there- fore, is to make a single authority responsible for all health functions, hospital, domiciliary and preventive, and for welfare as well. This will, of course, involve legislation and overcoming the vested interests of several existing authorities. Meanwhile something can be done by old people's advisory committees on which all agencies, both statutory and voluntary, are represented.

To, provide for the needs of old people many more one- or two-roomed-ground-floor flats should be built in all housing . estates, not as separate blocks but associated with other housing accommodation, so that sons and daughters or even grand- children may be able to care for aged relatives. " Plus-grannie " flats, which must be equally available for " grand-dads," with one or two extra rooms, are also useful.

When old people get ill at home, everything possible should be done to keep them out of hospital. It is easy to understand how the harrassed G.P., anticipating a prolonged illness with indifferent facilities to meet it, may call for admission to hospital. It is not difficult to appreciate how the friends and relations of the aged, with other heavy commitments, may long to see them safely tucked up in hospital beds. But, except in emergency, it is better that a geriatric specialist from the hospital, known and trusted by the G.P., should first see the case in consultation with him. He should know the facilities that exist for home-treatment, and should be able to weigh the claims of the particular patient against those of the many others waiting for a bed. Wherever this is possible without detriment, the hospital, or at any rate its facilities, should bo brought to the patient. Moreover, we must always remember that old people move badly when they are ill.

Meals on wheels, home helps, home nurses, home baths, home physiotherapy and even home chiropody are provided for the aged in some areas. Mattresses, bed-linen, bed-pans and other impedimenta for nursing the sick can be loaned. The washing of foul linen is a major problem, but even this is being undertaken in hospital laundries. Of course all this is expen- sive, but it costs much less than the £10 or £20 or even more per week for a bed in an acute general hospital. The real disaster is that not a penny of the money saved by the hospital authority through home treatment can be used to reduce the increased burden on the rates which results from this. When the acute stage is passed, many old people greatly benefit by continued treatment in the geriatric out-patient department of a hospital.

But of course all old people who are sick cannot be kept out of hospital. Some must be admitted, and in most cases should go direct to the general wards. There they can be care- fully vetted and a line of treatment decided upon. As soon as the need for active treatment is passed and the condition has become stabilised, many can be removed to a " home of recovery " or annexe closely associated with the hospital and staffed by it. All will not recover and be fit for discharge, but many will if out-patient facilities and hostel accommodation are available, and this should prevent the annexe from becoming a mere home for the dying.

So far we have considered the needs in health and sickness of old people who are capable of caring for themselves at home or have relatives or friends able to look after them. Unfor- tunately, there are many to whom this cannot apply. For such, either as married couples or single persons, delightful hostels are being provided, for the most part by adaptation of existing premises. To be fully appreciated, these should be as near as possible to the previous homes of the old people, so that friends and relations can visit them.

In them all may be as happy as a marriage-bell till the old people get ill, and then difficulties at once arise. For slight affections or minor ailments ordinarily nursed at home they can be cared for by their G.P. under the Health Act in the hostel. But the local authority that runs the hostel has neither the duty nor the power to provide for anything more than this. In some cases, of course, in which operation or very specialised treatment is required, the patient must be moved to hospital. But as is well known, old people have an unfortunate habit of dying if removed from their usual surroundings, and are much better treated in the hostel, with the help of a specialist if necessary, and of course nursing care. Is it not time that some arrangement was made to prevent these poor old people from falling between two stools, so that as good treatment can be provided for them when they are ill in their new homes as is available for the ordinary citizen ?

Lord Amulree, President of the Medical Society for the Care of the Elderly, will discuss this subject further next week.