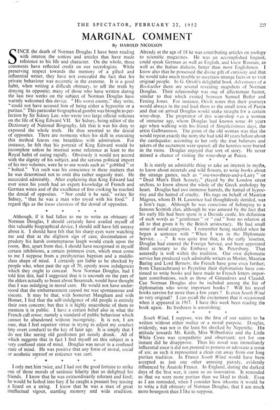 By HAROLD MCOLSON SINCE the death of Norman Douglas I have been reading with interest the notices and articles that have made reference to his life and character. On the whole, these comments have reflected credit on our necrologists. While preserving respect towards the memory of a gifted and influential writer, they have not concealed the fact that . his private behaviour was eccentric in the extreme. It is a good habit, when writing a difficult obituary, to tell the truth by denying its opposite; many of those who have written during the last two weeks on the subject of Norman Douglas have warmly welcomed this device. " His worst enemy," they write, "could not have accused him of being either a hypocrite or a puritan." This particular biographical gambit was brought to per- fection by Sir Sidney Lee, who wrote two large official volumes on the life of King Edward VII. Sir Sidney, being editor of the Dictionary of National Biography, felt that it was his duty to expound the whole truth. He thus resorted to the denial of opposites. There are moments when his skill in executing this method leaves one breathless with admiration. For instance, he felt that his portrait of King Edward would be incomplete unless he inserted some reference at least to the Royal habit of eating rapidly. Obviously it would not accord with the dignity of his subject, and the serious political import of his two volumes, were he to use words such as " gobbled " or " bolted." Yet such was his conscience in these matters that he was determined not to omit this rather ungainly trait. He succeeded admirably. After explaining that King Edward had ever since his youth had an expert knowledge of French and German wines and of the excellence of fine cooking he reached the denial of opposites. " Nor could it be said," writes Sir Sidney, " that he was a man who toyed with his food." I regard tlOs as the locus classicus of the denial of opposites.

Although, if it had fallen to me to write an obituary of Norman Douglas, I should certainly have availed myself of this valuable biographical device, I should still have felt uneasy about it. I should have felt that his sharp eyes were watching me and that at the slightest sign of cant, dissimulation or prudery his harsh contemptuous laugh would crash upon the room. But, apart from that, I should have recognised in myself certain inhibitions, a certain primness even, which must come to me I suppose from a presbyterian baptism and a middle- class shape of mind. I certainly am liable to be shocked by people who, when past the age of 70, openly avow indulgences which they ought to conceal. Now Norman Douglas, had I told him this, had I suggested that it is uncouth on the part of the elders actually to boast about Susannah, would have thought that I was indulging in moral cant. He would not have under- stood that the embarrassment caused me was spontaneous and sincere. It may be that, with Somerset Maugham and with Homer, I feel that the self-indulgence of old people is entirely their own concern; but that it is highly unaesthetic of them to mention it in public. I have a certain belief also in what the French call tenue, namely a standard of public behaviour which cannot be abandoned without incongruity. It is not, I am sure, that I feel superior virtue in trying to adjust my conduct (my overt conduct) to the key of later age. It is simply that I do not like seeing old gentlemen get noisily drunk. All of which suggests that in fact I find myself on this subject in a very confused state of mind. Douglas was never in a confused state of mind. He was positive that any form of moral, social or aesthetic reproof or reticence was cant. r I only met him twice, and I had not the good fortune to strike one of those moods of sardonic hilarity that so delighted his friends. I know that he was extraordinarily tolerant and kind; he would be lashed into fury if he caught a peasant boy teasing a lizard on a string. I know that he was a man of great intellectual vigour, startling memory and wide erudition. Already at the age of 18 he was contributing articles on zoology to scientific magazines. He was an accomplished linguist, could speak German as well as English, and knew Russian, as well as the Italian dialects, better than most Englishmen. I know also that he possessed the divine gift of curiosity and that he would take much trouble to ascertain strange facts or to visit original people. In G. Orioli's delightful book Adventures of a Bookseller there are several revealing snapshots of Norman Douglas. Their relationship was one of affectionate banter, similar to that which existetj between Samuel Butler and Festing Jones. For instance, Orioli notes that their journeys would always in the end lead them to the small town of Panza and that on arrival Douglas would make straight for a certain wine-shop. The proprietor of this wine-shop '':as a woman of immense age, whom Douglas had known some 40 years ago when walking with his friend of Simplicissintzis days, the artist Gulbrannson. The point of the old woman was that sho would repeat exactly the story she had told 40 years before about the earthquake; according to her only the true believers and takers of the sacrament were spared; all the heretics were buried in the ruins. Douglas enjoyed that sort of story. He never missed a chance of visiting the wine-shop at Panza.

It is surely an admirable thing to take an interest in myths, to know about minerals and wild flowers, to write books about the strange games, such as " one-two-three-and-a-Lairy "or " Dead Man's Dark Scenery," played by the London street urchins, to know almost the whole of the Greek anthology by heart. Douglas had two immense hatreds, the hatred of hypoc- risy and the hatred of cruelty. His rage on behalf of Maurice Magnus, whom D. H. Lawrence had thoughtlessly derided, was a lion's rage. Although he was conscious of belonging to a famous Scottish clan, although he was amused by the fact that his early life had been spent in a Deeside castle, his definition of such words as " gentleman " or " cad " bore no relation at all to that given it by the British aristocracy. He had small sense of social categories. I remember being startled when he began a sentence with " When I was in the Diplomatic Service. . . ." It was quite true that, in the early 'nineties. Douglas had entered the Foreign Service, and been appointed third secretary to the Embassy at St. Petersburg. That assuredly is well within the tradition. Our own diplomatic service has produced such admirable writers as Morier, Maurice Baring and Lord Berners; the French have gone even further; from Chateaubriand to Peyrefitte their diplomatists have con- tinued to write books and have made to French letters impor- tant contributions, such as those of Giraudoux and Claudel. Can Norman Douglas also be included among the list of diplomatists who wrote important books ? Will his travel books survive for more than a few years Is even South Wind so very original? I can recall the excitement that it occasioned When it appeared in 1917. I have this week been reading the book again. Its freshness is astonishing.

South Wind, I suppose, was the first of our satires to bo written without either malice or a moral purpose. Douglas, evidently, was not in the least bit shocked by Nepenthe. His attitude towards Mr. Keith, Miss Wilberforce and the Little White Cows was sympathetic and observant; not for one instant did he disapprove. Thus his novel was immediately influential since it did not pretend to possess or advocate a sense of sin; as such it represented a clean cut away from our long puritan tradition. In France South Wind would have been accepted as just one other amusing parody, evidently influenced by Anatole France. In England, during the darkest days of the first war, it came as an innovation. It reminded us that we were more puritan than we liked to think. Even as I am reminded, when I consider how irksome it would be to write a full obituary of Norman Douglas, that I am much more bourgeois than I like to suppose.