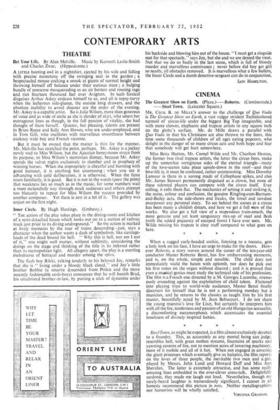 Inner Circle. By Hugh Hastings. (Embassy.) " THE action of

the play takes place in the dining-room and kitchen of a semi-detached house which looks out on to a section of railway track just prior to its diving underground." So the action is marked at lively moments by the roar of trains descending—just, says a character when the author wants a dash of symbolism, like carriage- loads of the dead bound for hell. " Why this is hell, nor am I out of it," one might well mutter, without sublimity, considering the doings on the stage and thinking of the title in its infernal rather than its metropolitan light. All allegory apart, the play is a snorting melodrama of betrayal and murder among the spivs.

The flash boy Rikki, talking tenderly to his beloved Joy, remarks that she is " living under a bloody black cloud," and Joy's little brother Bobbie (a smartie descended from Pinkie and the more recently fashionable cosh-boys) announces that he will banish Brad, his unadmired brother-in-law, by putting a stick of dynamite under his backside and blowing him out of the house. "I must get a ringside seat for that spectacle," says Joy, but she and we are denied the treat. Not that we do so badly in the last scene, which is full of bloody murder and marvellous contrivance ; never before did boy get girl so neatly, all obstacles removed. It is marvellous what a few bullets, the Inner Circle and a dumb detective-sergeant can do in conjunction.