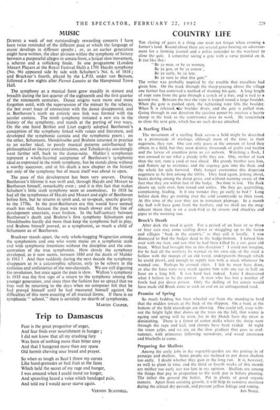 After .dark the road is quiet. For a period of an hour or so three or four cars may come rattling down or struggling up to the farms and villages " back in the country," as they call it locally. I was dismayed to find the badger dead in the hedge-bottom. I turned him over with my foot. and saw that he had been killed by a car, poor old beast. What had brought him in this direction ? 1 could not imagine, for he had all the territory he wanted on his own side of the road, a hollow with the stumps of an old wood, undergrowth through which he could prowl, and enough to supply him with a snack whenever he wanted one. Perhaps he crossed often. 1 felt he must have done, or else the fates were very much against him with one car in half an hour on a long hill. It was hard luck indeed. Later 1 discovered what 1 believe to be the answer. A man who has lost a number of fowls had put down poison. Only the dulling of his senses would have made old Brock come to such an end on an unfrequented road.