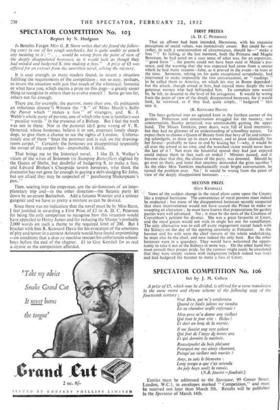 Report by N. Hodgson In Benefits Forgot Miss G. B. Stern writes that she found the follow- ing entry in one of her rough notebooks, but is quite linable to attach any meaning to it : " . . . would be wrong from the point of view of the deeply disappointed hostesses, as it would look as though they had minded and badgered S. into making a fuss." A prize of £5 was offered for an extract from the unwritten novel, solving the mystery.

It is easy enough, as many readers found, to invent a situation fulfilling the requirements of the competition not so easy, perhaps, to invest the situation with just that touch of the whimsical, fantastic or what have you, which merits a prize on this page—a greatly easier thing to recognise in others than to evolve oneself ! Some go too far, others not far enough.

There are, for example, the parrots, more than one. (Is psittacosis an infectious disease ?) Witness the "S." of Miles March's Sallie the Parrot which " makes a fuss " of strangers, and K. J. Webb's whole party of parrots, one of which (the type is familiar) uses " peculiar words " in the presence of a Bishop. But I feel the truth was not in these. Nor in the pastoral idyll gone wrong of V. R. Ormerod, whose hostesses, believe it or not, entertain lonely sheep- dogs, to give them a chance to see the sights of London. Unfortu- nately one of them "bites the postman and is sick on the drawing- room carpet." Certainly the hostesses are disappointed (especially the owner of the carpet) but—improbable, I think.

That brings me to the historical novel. I like D. S. Walker's vision of the wives of Solomon (in Stamping Butterflies) slighted by the Queen of Sheba, but doubtful of badgering S. to make a fuss, and Edward Blishen's Cheapside tavern hostesses, who think the dramatist has not gone far enough in guying a debt-dodging Sir John, but are afraid they may be suspected of " purchasing Shakespeare's pen."

Then, soaring into the empyrean, are the air-hostesses of an inter- planetary trip and—in the other direction—the Satanic party let down by an errant Beelzebub. Add a fatuous Wooster and a sinister gangster and we have as pretty a mixture as can be desired.

Since there was no indication that the novel must be by Miss Stern, I feel justified in awarding a First Prize of £2 to A. D. C. Peterson for being the only competitor to recognise how this situation would have appealed to Henry James and for reducing the Master's probable 2,000 words on such a theme to the required limit of 200. But I bracket with him R. Kennard Davis for his evocation of the emotions of pity and terror in a context Aristotle would have found unpromising —on condition that a deus ex machina rescues his unfortunate school- boys before the end of the chapter. £1 to Guy Kendall for as real a stymie as the competition afforded. FIRST PRIZES (A. D. C. PETERSON) That an affront had been intended, Shenstone, with his exquisite perception of social values, was instinctively aware. But could he—or rather, in such a concatenation of circumstance, should he—" make a fuss " ? In failing, at the last moment, both the Princess and Magda Bennison, he had acted on a sure sense of what was, for an expatriate, " good form " ; the poems could not have been read in Maisie's pre- sence, and the warning that she was expected had come from a source which he had many reasons—false, as it proved in the event—to trust at the time. Someone, relying on his quite exceptional scrupulosity, had intervened to make impossible the two conversazioni, or " readings " `as he called them in America, on which his stay in Rome depended ; but the attack, though aimed at him, had injured more deeply the two generous women who had befriended him. To complain now would be, he felt, to descend to the level of his antagonist. It would be wrong from the point of view of the deeply disappointed hostesses, for it would look, he surmised, as if they had, quite simply, " badgered " him into it.

(R. KENNARD DAVIS) The boys gathered into an agitated knot in the furthest corner of the garden. Politeness and consternation struggled for the 'mastery, and consternation, Stanley perceived, was unmistakably gaining the upper hand. The Misses Tomkins, poor dears, were full of kind intentions, but they had no glimmer of an understanding of schoolboy nature. To expect them to choose a Queen of Beauty from that bevy of fat and simper- ing schoolgirls, to dress up in sham armour, and to joust idiotically for her favour—probably to have to end by kissing her !—why, it would be -all over the school in no time, and the wretched victor would never hear the last of it ! Not even the bountiful spread they had just enjoyed could induce them to face such an ordeal ! Minutes passed, and it became clear that this, the climax of the party, was doomed. Should he go over to them, and insist that courtesy demanded the grim sacrifice ? As the elder Miss Tomkins mechanically made bright conversation, he turned the problem over. No ! It would be wrong from the point of view of the deeply disappointed hostesses... .

News of the sudden change in the royal plans came upon the County -.like a tropical hurricane. The convenience of royal persons must indeed be respected ; but many of the disappointed hostesses secretly suspected that mere inconvenience would not have caused the Prince to make so sweeping an alteration ; he must have known that preparations for garden parties were well advanced. No ; it must be the news of the Countess of Cravenham's petition for divorce. She was a great favourite at Court, and the royal guests would not wish to single her out for cancellation. The only alternative was to call off every engagement except lunch with the Sidneys on the day of the opening ceremony at Folcaster. As the baronet and his wife were the chief movers of the whole undertaking, he must also be-the chief, and now indeed the only host. But the other hostesses were in a quandary. They would have welcomed the oppor- tunity to take it out of the Sidneys in some way. On the other hand they must consult their proper pride, for the rumour might easily be circulated that they were simply vicious with indignation (which indeed was true) and had badgered the baronet to make a fuss at Court.