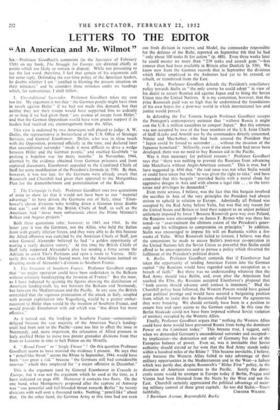 i‘ An AmeriCaq and Mr. Wilmot"

SIR,—Professor Goodhart's comments (in the Spectator of February 15th) on my book, The Struggle for Europe, are directed chiefly at points which are likely to remain in dispute. While not presuming to say the last word, therefore, I feel that certain of his arguments call for some reply. Defending the war-time policy of the American leaders, be doubts whether I am " justified in blaming the present situation on their mistakes," and he considers these mistakes under six headings which, for convenience, I shall follow.

1. Unconditional Surrender. Professor Goodhart takes my case too far. My argument is not that " the German people might have risen in revolt against Hitler " if we had not made this demand, but that neither they nor their troops would have supported him so ardently or so long if we had given them " any avenue of escape from Hitler," and that the German Opposition would have won greater support if its leaders had received any encouragement from the Allies.

This view is endorsed by two Americans well placed to judge: A. W. Dulles, the representative in Switzerland of the U.S. Office of Strategic Services, and General Eisenhower. Dulles, who was in close touch with the Opposition, protested officially at the time, and declared later that unconditional surrender " made it most difficult to drive a wedge between Hitler and the German people," and enabled Goebbels " to prolong a hopeless war for many months." In November, 1944, alarmed by the evidence obtained from German prisoners and from captured documents, Eisenhower appealed to the Combined Chiefs of Staff for some modification of the President's formula (p. 550). By then, however, it was too late, for the Germans were already aware that Roosevelt and Churchill had given their approval to the Morgenthau Plan for the dismemberment and pastoralisation of the Reich.

2. The Campaign in Italy. Professor Goodhart uses two quotations of mine to show (a) that it would not have been to our " material advantage " to have driven. the Germans out of Italy, since " Eisen- hower's eleven divisions Were holding down a German force double that size "; and (b) that the 'British Chiefs of Staff, as well as the American. had " never been enthusiastic about the Prime Minister's Balkan and Aegean projects " Both these quotations refer, however, to 1943, not 1944. In the latter year it was the Germans, not the Allies, who held the Italian front with greatly inferior forces, and they were able to do this because the Allied offensive was curtailed by the American Chiefs of Staff, just when General Alexander believed he had "a golden opportunity of scoring a really decisive victory." At this time the British Chiefs of Staff fully supported Alexander's plan for sending a force across the Adriatic to assist Tito's Partisans and open a route to Vienna. Mili- tarily this was what Hitler feared most, but the Americans insisted on diverting seven of Alexander's divisions to Southern France.

3. The Invasion of Southern France. Professor Goodhart argues that no major operation could have been undertaken in the Balkans without seriously handicapping the invasion of France." But the issue, as I have indicated by quoting the figures showing the distribution of American landing-craft, lay not between the Balkans and Normandy, but between the Mediterranean and the Pacific. In any case, the British contended that the vigorous prosecution of the attack in Italy, coupled with prompt exploitation into YugoslaviacwoUld be a greater embar- rassment to Hitler than would be the invasion of Southern France, and would provide Eisenhower with aid which was less direct but more effective."

As it turned out, the landings in Southern France—unnecessarily delayed because the vast majority of the American Navy's landing- craft had been sent to the Pacific—came too late to affect the issue in Normandy, and, more important, the relaxation of Allied pressure in Italy enabled Hitler to move two panzer grenadier divisions from that front to Lorraine in time to halt Patton on the Moselle.

4. "Broad Front" or " Single Thrust "? On this question Professor Goodhart seems to have misread the evidence I present. He says that a " pencil-like thrust " across the Rhine in September, 1944, would have been - too great a risk " because " the Germans still had considerable reserves " which they employed for " a major offensive in December."

This is the argument used by General Eisenhower in Crusade in Europe, but it was not the argument which he used at the time, as I have indicated on page 490. Moreover it contains two flaws. On the one hand, what Montgomery proposed after the capture of Antwerp was " one powerful and full-blooded thrust towards Berlin " by twenty divisions with well over a thousand tanks. Nothing " pencil-like " about that. On the other hand, the German Army at this time had not even

one fresh division in reserve, and Model, the commander responsible for the defence of the Ruhr, reported on September 6th that he had " only about 100 tanks fit for action" (p. 480). Even three weeks later he could muster no more than " 239 tanks and assault guns "—less armour than had been available in Britain after Dunkirk (p. 536). We know now from the German records that-in September the divisions which Hitler employed in the Ardennes had yet to be created, or rebuilt, or transferred from the East.

5. Yalta. Professor Goodhart defends the President's conciliatory policy towards Stalin as " the only course he could adopt " in view of his desire to secure Russian aid against Japan and to bring the Soviet Union into the United Nations. It is my contention, however, that the price Roosevelt paid was so high that he undermined the foundations of his own hopes for a post-war world in which international law and justice would preyail.

In defending the Far Eastern bargain Professor Goodhart accepts the Pentagon's contemporary estimate that " without Russia it might cost the U.S. a million casualties to conquer Japan." But this estimate was not accepted by two of the four members of the U.S. Joint Chiefs of Staff (Leahy and Arnold) nor by the commanders directly concerned, Nimitz and MacArthur, who had both assured the President that " Japan could be forced to surrender . . . without the invasion of the Japanese homeland." Militarily, even if the atom bomb had never been developed, there was no need to buy Russian aid in the Pacific.

Was it then necessary for political reasons ? Professor Goodhart says that there was nothing to prevent the Russians from advancing into Manchuria without Anglo-American consent," This is true, but I have suggested (p. 654) that " the real issue was not what Stalin would or could have taken but what he was given the right to take," and have contended• that this bargain provided Stalin with a moral cloak for aggressive designs in Asia and with almost a legal title . . . to the terri- tories and privileges he demanded."

Even more serious, I believe, was the fact that this bargain involved the sacrifice in Asia of the very principles the President had always striven to uphold in relation to Europe. Admittedly all Poland was occupied by the Red Army before Yalta, but was that any reason for the United States and Britain to lend their support to an unjust political settlement imposed by force ? Because Roosevelt gave way over Poland, the Russians were encouraged—as James F. Byrnes who was there has noted—to " over-estimate the ultimate extent of the President's gener- osity and his willingness to compromise on principles." In addition, Stalin was encouraged to impose his will on Rumania within a few weeks of Yalta. What Roosevelt failed to foresee, I believe, was that the concessions he made to secure Stalin's post-war co-operation in the United Nations left the Soviet Union so powerful that Stalin could afford to be unco-operative and to pursue a policy which thwarted the fulfilment of the President's political dream.

6. Berlin. Professor Goodhart contends that if Eisenhower had taken the opportunity of sending American Forces into the German capital "the Russians would have regarded such an occupation as a breach of faith." But there was no understanding whatever that the Red Army should take Berlin, and, even after the Americans had reached the Elbe,, the Russians accepted Eisenhower's proposal that " both armies should advance until contact is imminent." Had the Churchill policy been followed, the Western Powers would have gained great political prestige and would have secured a bargaining position from which to insist that the Russians should honour the agreements they were breaking. We should certainly have been in a position to ensure free and open access to the German capital. In this case the Berlin blockade could not have been imposed without Soviet violation of territory occupied by the Western Allies.

Finally, Professor Goodhart argues that "nothing the Western Allies could have done would have prevented Russia from being the dominant Power on the Continent today." This became true, I suggest, only when we demanded Germany's unconditional surrender and accepted— by implication—the destruction not only of Germany but also of the European balance of power. Even so, was it inevitable that Soviet authority should extend so far west that the Red Army stands today within a hundred miles of the Rhine ? This became inevitable, I believe, only because the Western Allies failed to take advantage of their military opportunities in -the Mediterranean and in the West—a failure which was partly due, despite Roosevelt's "Hitler First" policy, to the diversion of American resources to the Pacific. Surely the demo- cratic cause would be stronger in Europe today if Berlin, Prague and Vienna had been liberated from the Nazis by the West and not the East. Churchill certainly appreciated the political advantage of secur- ing military control of these great capitals. So too did Stalin.—Yours faithfully, 5 Burnham Avenue, Beaconsfield, Bucks.