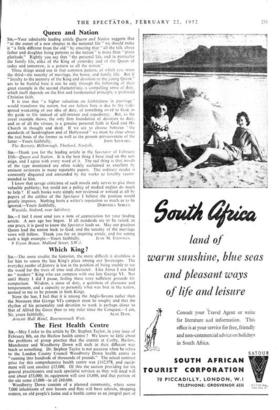 Slit,—Your admirable leading article Queen and Nation suggests that " at the outset of a new chapter in the national life" we should make it " a little different from the old " by ensuring that " all the talk about father and daughter being patterns to the nation " is more than " pious platitude." Rightly you say that " the personal life, and in particular the family life, alike of the King of yesterday and of the Queen of today and tomorrow, is a pattern to all the nation."

Three things stand out in that common pattern, of which you stress the third—the sanctity of marriage, the home, and family life. But if "loyalty to the memory of the King and devotion to the young Queen" are to be fruitful here it can be only through the following of their great example in the second characteristic, a compelling sense of duty, which itself depends on the first and fundamental principle, a profound Christian faith.

It is true that " a higher valuation on faithfulness in marriage " would transform the nation, but our failure here is due to the wide- spread weakening of our idea of duty, of something owed to God, as the guide to life instead of self-interest and expediency. But, as the royal example shows, the only firm foundation of devotion to duty, and so of all the virtues, is a genuine personal faith in God and His Church in thought and deed. If we are to choose between " the standards of Sandringham and of Hollywood" we must be clear about the real basis of the former as well as the present pervasiveness of the