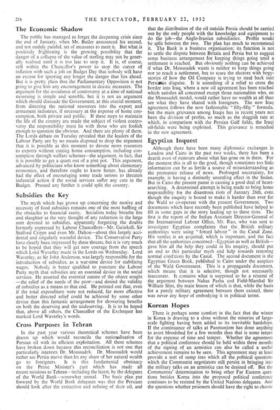 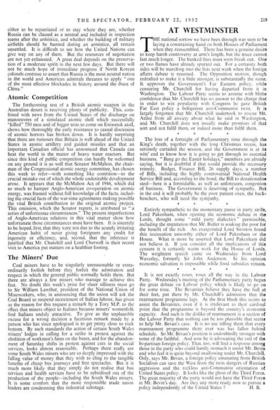 There is perhaps some comfort in the, fact that the winter in Korea is drawing to a close without the miseries of large- scale fighting having been added to its inevitable hardships. If the continuance of talks at Panmunjom has done anything to avert bloodshed for a few months then that is some return for the expense of time and temper. Whether the agreement that a political conference should be held within three months of the signing of an armistice can also be called a useful achievement remains to be seen. This agreement may at least provide a sort 'of sump into which all the. political questions which the Communist negotiators still persist in bringing into the military talks on an armistice can be drained off. But the Communists' determination to bring other Far Eastern ques- tions besides Korea into the proposed political conference continues to be resisted by the United Nations delegates. And the questions whether prisoners should have the right to choose either to be repatriated or to stay where they are, whether Russia can be classed as a neutral and included in inspection teams after the armistice, and whether the building of military airfields should be banned during an armistice, all remain unsettled. It is difficult to see how the United Nations can give way on any of them. But the resources of negotiation are not yet exhausted. A great deal depends on the preserva- tion of a moderate spirit in the next few days. But there will not be much hope of immediate progress if North Korean colonels continue to assert that Russia is the most neutral nation in the world and American admirals threaten to apply " one of the most effective blockades in history around the roast of China."