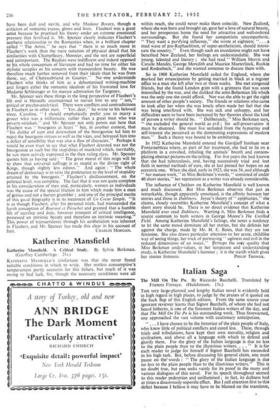 (Geoffrey Cumberlege. 21s.) KATHERINE MANSFIELD'S misfortune was that she never found suitable conditions in which to write. Her restless consumptive's temperament partly accounts for this failure, but much of it was owing to bad luck, for, though the necessary conditions were all within reach, she could never make them coincide. New Zealand, where she wat born and brought up, gave her a love of natural beauty, and her prosperous home the need for attractive and well-ordered surroundings. But she found her compatriots unsympathetic. " They want a purifying influence," she wrote at eighteen; ". . a mad wave of pre-Raphaelitism, of super-aestheticism, should intoxi- cate the country." Even though such an inundation might not have benefited New Zealand, her feelings are understandable. She was young, talented and literary ; she had read " William Morris and Catulle Mendes, George Meredith and Maurice Maeterlinck, Ruskin and Rodenbach," and she wanted someone to discuss them with.

So in 1908 Katherine Mansfield sailed for England, where she *larked her emancipation by getting married in black at a register office to a man she left after two or three weeks. She met congenial friends, but she found London grim with a grimness that was soon intensified by the war, and she disliked the semi-Bohemian life which was the only one she could afford. Nor was she able to get the right amount of other people's society. The friends or relations who came to look after her when she was lonely often made her feel that she was being interfered with. She was sick and unhappy, and her difficulties seem to have been increased by her theories about the kind of person a writer should be. " Deliberately," Miss Berkman says, " she excluded the general world as evil ; for self-preservation it must be shunned. She must live secluded from the hypocrisy and self-interest she perceived as the dominating expressions of modem man." Such a theory was bound to be embittering.

In 1922 Katherine Mansfield entered the Gurdjieff Institute near Fontainebleau where, as part of her treatment, she had to lie on a platform in a cowshed, inhaling the animals' breath and contem- plating abstract pictures on the ceiling. For five years she had known that she had tuberculosis, and, having successively tried and lost faith in normal methods of cure, she at last pinned her hopes on an eccentric one. When she died, early in 1923, she was 34, and although " her mature work," in Miss Berkman's words, " consisted of under 40 short stories," her reputation as a writer was already considerable.

The influence of Chekhov on Katherine Mansfield is well known and much discussed. But Miss Berkman observes that just as remarkable, though apparently unnoticed, is the affinity between her stories and those in Dubliners. Joyce's theory of " epiphanies," she claims, closely resembles Katherine Mansfield's concept of what a short story should be. There is no direct evidence that Katherine Mansfield ever read Dubliners. Wanting it, Miss Berkman finds a source common to both writers in George Moore's The Unfilled . Field. Among Katherine Mansfield's failings, she notes a tendency to let the same mood dominate all her stories, but she defends her against the charge, made by Mr. H. E. Bates, that they are too feminine. She also draws particular attention to her acute, childlike way of seeing things, her trick of portraying " ugliness and evil in the reduced dimensions of an insect." Perhaps the only quality that Miss Berkman under-values, in her temperate and understanding study, is Katherine Mansfield's humour ; it is the starch which gives