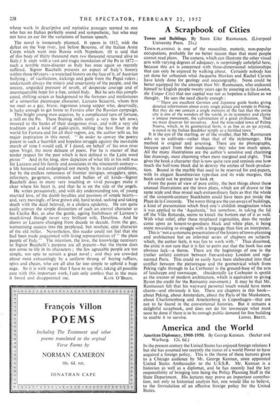 A Scrapbook of Cities

TOWN-PLANNING is one of the masculine, esoteric, non-popular occupations, probably for no better reason than that most people cannot read plans. The camera, which can illustrate the other visual arts with varying degrees of adequacy, is surprisingly unhelpful here, because this art is concerned with three-dimensional relationships that can only be enjoyed by walking about. Certainly nobody has yet done for urbanism what Jacquetta Hawkes and Rachel Carson have lately done for geology and oceanography. None could be better equipped for the attempt than Mr. Rasmussen, who endeared himself to English people twenty years ago by assuring us (in London, the Unique City) that our capital was not as hopeless a failure as we thought. He sees the need clearly enough : " There are excellent German and Japanese guide books giving

detailed information about every single palace and temple in Peking. But they do not contain a single mention of the fact that the entire city is one of the wonders of the world, in its symmetry and clarity a unique monument, the culmination of a great civilisation. That we must discover for ourselves. And the nine-sided town of Palma Nuova, which, in its geometrical form, is as fine as an ice crystal, is noted in the Italian Baedeker simply as a fortified town."

It is the eye of the starling, or of the stroller, that Mr. Rasmussen asks us to cultivate—rather than that of the stylentonger. His method is original and arresting. There are no photographs, because apart from their inadequacy they take too much space. All the many illustrations are the author's sensitive and charming line drawings, most charming when most marginal and slight. This gives the book a character that is now quite rare and reminds one how much the half-tone block did to destroy the unities of book-produc- tion. Bound in the marble that used to be reserved for end-papers, with its elegant Scandinavian type-face and its wide margins, this book could not be prettier to look at

From the point of view of pure utility, the best things about these unusual illustrations are the town plans, which are all drawn to the same scale and thus reveal such extraordinary facts as that the whole of the sixteenth-century Stockholm could have been put inside the Place de la Concorde. The worst thing are the cut-aways of buildings, a kind of presentation which fired one's childish imagination when it was applied to the `Aquitania,' but somehow, in taking the lid off the Villa Rotunda, seems to knock the bottom out of it as well. With what relief, after these misplaced ingenuities, does the reader come upon an honest-to-goodness black and white plan, it being more rewarding to struggle with a language than hire an interpreter.

This is "not a systematic presentation of the history of town-planning and architecture but an informal series of chapters on subjects which, the author feels, it was fun to work with." Thus disarmed, the critic is not sure that it is fair to point out that the book has one obvious lack—a theme. There are the beginnings of one in the (rather unfair) contrast between free-and-easy London and regi- mented Paris. This could so easily have been elaborated into that conflict between the picturesque and the geometrical which from Peking right through to Le Corbusier is the ground-base of the arts of landscape and townscape. (Incidentally Le Corbusier is spotlit as the creator of modern architecture, which is equivalent to giving Byron She credit for the Romantic movement.) It may be that Mr. Rasmussen felt that his wayward personal touch would have more charm—and obviously it has. There are chapters in this book— about Peking, about AmSterdam, about the Paris of the Musketeers, about Charlottenborg and Amelienborg in Copenhagen—that are not to be found in the conventional histories. But it remains a delightful scrapbook, and does not do for townscape what must soon be done if there is to be enough public demand for fine building