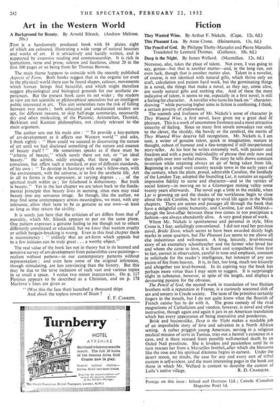 The Pencil of God. By Philippe Thoby-Marcelin and Pierre Marcelin.

Deep is the Night. By James Wellard. (Macmillan. 12s. 6d.) Nommo, alas, takes the place of talent. Not even, I was going to say, genius—but that is another matter—and, in the long run, not even luck, though that is another, matter also. Talent in a novelist, of course, is not identical with natural gifts, which thrive only on craft, calculation and patient hard work, but the germinating things in a novel, the things that make a novel, as they say, come alive, are surely natural gifts and nothing else. And of these the most indicative of talent, it seems to me, especially in a first novel, is still a feeling for character. A novelist who turns his back on " character- drawing " while pursuing higher aims in fiction is confessing, I think, a certain poverty of endowment.

The warmth and liveliness of Mr. Nickels's sense of character in They Wanted Wine, a first novel, have given me a great deal Of pleasure. This is a work of uncommon freshness and a most attractive sincerity of feeling. Since so many first novels nowadays run only to the clever, the shoddy, the bawdy or the cerebral, the merits of They Wanted Wine deserve full recognition. Mr. Nickels is, I am sure, a writer of genuine talent, quick in imagination, mature in thought, robust of humour and a fine-tempered if still inexperienced story-teller. At his best he writes extremely well, with passion and freedom and with a poetic individuality of phrase that only now and then spills over into verbal excess. The story he tells shows constant invention while retaining always an air of being taken from life. Beginning in a small west country seaside town in the early years of the century, when the plain, proud, admirable Caroline, the landlady of the London Tap, adopted the foundling Lar, it sustains an equally impressive fidelity to scene and character—and to the verities of social history—in moving on to a Glamorgan mining valley some twenty years afterwards. The novel sags a little in the middle, when Lar is growing up and the shades of the workhouse begin to close about the sick Caroline, but it springs to vivid life again in the Welsh chapters. There are scenes and passages all through the book that have a delightful comic humanity, and Caroline, Lar and Mildred— though the love-affair between these two comes in too precipitate a fashion—are always abundantly alive. A very good piece of work.

Where Mr. Nickels is spontaneous and personal in style, Miss Crone is, I fear, unfailingly conventional. I did not read her previous novel, Bridie Steen, which seems to have been awarded dizzily high marks in some quarters, but The Pleasant Lea seems to me above all else industrious and well-meant. A long, leisurely, level-browed story of an exemplary schoolteacher and the farmer who loved her and whom she came to love, it is fluent and sympathetic from first to last, correct in observation, careful in tone and emphasis, constant in solicitude for the reader's intelligence, but innocent of any sus- picion of fire from heaven. It is, in fact, too long, much too leisurely and altogether too level-browed. In its aspiring way the book has perhaps more virtue than I may seem to suggest. It is surprisingly slight in substance, however, in spite of the length, and displays a devouring passion for the obvious.

The Pencil of God, the second work in translation of two Haitian brothers with a reputation in France, is a curiously seasoned dish of sex and sorcery in Creole society. The taste of the primitive certainly lingers in the mouth, but I do not quite know what the flourish of French cuisine has to do with it. The gross comedy of the rival magnetisms of Catholicism and voodoo, however, is novel and often instructive, though again and again it jars in an American translation which has every appearance of being insensitive and ponderous.

Brisk and businesslike, Deep is the Night makes a readable job of an improbable story of love and salvation in a North African setting. A rather priggish young American, serving in a religious medical mission of sorts in Tunisia, tries out a hermit's existence in a cave, and is there rescued from possibly well-merited death by an Ouled Nail prostitute. She is loveless and passionless until he in turn rescues her from a Marseilles brothel,-after which she blossoms like the rose and his spiritual dilemma begins in earnest. Under the desert moon, no doubt, the case for any and every sort of tribal custom is self-evident, and the most interesting pages in the book are those in which Mr. Wellard is content to describe the custom of