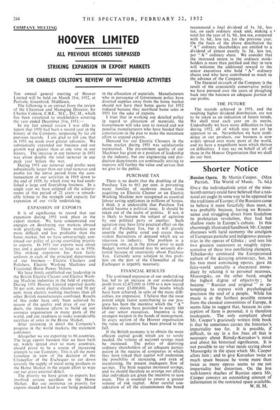 ONLY the individualistic artist of the nine- teenth century could have believed that a nat- ional art ought in some way to be opposed to the traditions of Europe; if the Russians came to believe it more forcefully than most, it was probably because, having no Renais- sance and struggling direct from feudalism to proletarian revolution, they had but shallow roots in Europe's culture. In this charmingly illustrated handbook Mr. Cooper discusses with lucid economy the amalgam of European pastiche and indigenous peasan- tries in the operas of Glinka ; and sees his two greatest successors as roughly repre- sentative of these two conflicting elements. Tchaikovsky continued the Europeanised culture of the decaying aristocracy, but, in his two most convincing operas, gave its -fairy-world unreality a sharpened imme- diacy by relating it to personal neuroses. Mussorgsky, on the other hand, sought the highest degree of objectivity ; he became " Russian and original " in at- tempting to express with psychological precision the soul of a people. While his music is at the furthest possible remove from the classical conventions of Europe, it seems false to suggest that, because its con- ception of form is personal, it is therefore inadequate. The only complaint about Mr. Cooper's graciously written little book is that he sometimes carries the historian's impartiality too far. It is possible, if difficult, to say in a few lines all that is necessary about Rimsky-Korsakov's mind and about his historical significance. It is not possible to say what needs saying about Mussorgsky in the space which Mr. Cooper allots him ; and to give Korsakov twice as much space because he wrote more than twice as many operas seems to me not impartiality but distortion. On the less well-known reaches of Russian opera Mr. Cooper conveys an astonishing amount of information in the restricted space available.