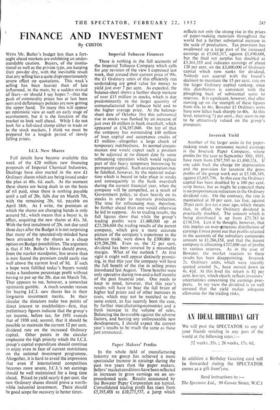 WITH Mr. Butler's budget less than a fort- night ahead markets are exhibiting an under- standable caution. Buyers, of the institu- tional as well as the private type, are keeping their powder dry, with the inevitable result that any selling has a quite disproportionately severe effect lap quotations. This week's selling has been heavier than of late influenced, in the main, by a sudden revival of fears—or should 1 say hopes ?—that the peak of commodity prices has at last been seen and deflationary policies are now getting the upper hand. To many this will appear

• an optimistic view at such an early stage of rearmament, but it is the function of the market to look well ahead. While I do not look for a full-sized slump either in trade or in the stock markets, I think we must be prepared for a longish period of slowly falling prices.

I.C.I. New Shares Full details have become available this week of the £20 million new financing proposals of Imperial Chemical Industries. Dealings have also started in the new £1 Ordinary shares which are being issued under the plan at 40s. 6d. each. At the moment these shares are being dealt in on the basis of nil paid, since there is nothing payable until a call of 20s. falls due on March 7th, with "the remaining 20s. 6d. payable on April 18th. As I write, the premium at which the shares are changing hands is only around 9d., which means that a buyer is, in effect, acquiring the new shares at 41s. 3d. With the first instalment of 20s. not due until three days after the Budget it is not surprising that many of the speculatively-minded have been attracted by the shares as a cheap option on Budget possibilities. The argument is that if Mr. Butler's blows should prove, from the market standpoint, less severe than is now feared the premium could easily rise well above the current level of 9d. If such a hope were fulfilled today's buyers would make a handsome percentage profit without having to put up the 20S. due on March 7th. That appears to me, however, a somewhat optimistic gamble. A much sounder reason for buying I.C.I. new shares lies in their long-term investment merits. In their circular the directors make two points of direct interest to stockholders—first, that preliminary figures indicate that the group's net income, before tax, for 1951 exceeds that of 1950 and, second, that it should be possible to maintain the current 12 per cent. dividend rate on the increased Ordinary capital. Other points in the circular emphasise the high priority which the I.C.I. group's capital expenditure should continue to enjoy even in face of current restrictions on the national investment programme. Altogether, it is hard to avoid the impression that even if international competition becomes more severe, I.C.I.'s net earnings should be well maintained for a long time ahead. Priced to yield nearly 6 per cent. the new Ordinary shares should prove a worth- while industrial investment. There should be good scope for recovery in better times. Imperial Tobacco Finances

There is nothing in the full accounts of the Imperial Tobacco Company which calls for pny revision of the view I expressed last week, that around their current price of 90s. the £1 Ordinary units of this efficiently run undertaking are good value for money to yield just over 7 per cent. As expected, the balance-sheet shows a further sharp increase of over £15 million in stocks, which is due predominantly to the larger quantity of unmanufactured leaf tobacco held and to the higher average price. At the balance- sheet date of October 31st this substantial rise in stocks was flanked by an increase of just over £6 million in bank overdraft, which appeared at £34,187,040. On top of that the company has outstanding £40 million of loan capital and acceptance credits of £5 million—altogether a large chunk of temporary indebtedness. In normal circum- stances one would expect such a position to be adjusted at no distant date by some refinancing operation which would replace part of this heavy temporary borrowing by permanent capital. Such an expectation may be falsified, however, by the material reduc- tion which is bound to take place in stocks and consequently in the bank overdraft during the current financial year, when the company will be compelled, as a result of Government policy, to draw heavily on its stocks in order to maintain production. The time for refinancing may, therefore, be further ahead than one would otherwise be led to suppose. As to trading results, the full figures show that while the group's trading profits were £1,400,000 up at £23,284,604.the trading results of the parent company, which give a more accurate picture of the company's experience in the tobacco trade, were down by £500,000 to £19,206,280. Even so, the 32 per cent. dividend has been covered by a reasonable margin. What of the outlook ? At first sight it might well appear distinctly promis- ing, in that this year the company will have the full benefit of the rise in selling prices introduced last August. Those benefits were only operative during two-and-a-half months of the past financial year. One needs to keep in mind, however, that this year's results will have to bear the full brunt of higher leaf prices and of other increases in costs, which may not be matched to the same extent, as has recently been the case, by further manufacturing-economies and a fresh increase in the volume of sales. Balancing the favourable against the adverse factors, and barring any unforeseeable new developments, I should expect the current year's results to be much the same as those just announced.

In the whole field of manufacturing industry no group has achieved a more spectacular increase in earnings during the past two years than the paper makers. Sellers' market conditions have been reflected in increases in gross earnings on an un- precedented scale. Results announced by the Bowater Paper Corporation are typical. Consolidated trading profit has risen from £5,395,488 to £10,275,537, a jump which reflects not only the strong rise in the prices of paper-making materials throughout the world but a further substantial increase in the scale of production. Tax provision has swallowed up a large part of the increased earnings at £5,045,317, against £1,890,688, but the final net surplus has doubled at £3,361,355 and indicates earnings of about 120 per cent. on the £3,600,000 of Ordinary capital which now ranks for dividend. Nobody can quarrel with the board's decision to maintain the 15 per cent. rate on the larger Ordinary capital ranking, since this distribution is consistent with the ploughing back of substantial sums to reserves. It is significant, however, that after moving up on the strength of these figures from 43s. to 46s. Bowater £1 Ordinary units have now fallen back sharply to 40s. At this level, returning 71 per cent., they seem to me to be attractively valued on the group's prospects.

Inveresk Yield Another of the larger units in the paper- making trade to announce record earnings is the Inveresk Paper Company, whose profits for the year to September 30th, 1951, have risen from £587,595 to £1,890,324. if one adds back the charge for depreciation and the provision for taxation the gross profits of the group work out at £5,148,349, against £1,685,796. In this case the Ordinary capital has been doubled by a 100 per cent. scrip bonus, but as might be expected there is no proportionate reduction in the Ordinary dividend rate. On the contrary, the rate is maintained at 10 per cent. tax free, against 20 per cent. less tax a year ago, which means that, in effect, the Ordinary dividend is practically doubled. The amount which is being distributed is up from £71,783 to £130,514. Lest it be thought, however, that this implies an over-generous distribution of earnings I must point out that profits retained in the accounts of the subsidiary companies amount to £1,266,158, and that the parent company is allocating £332,000 out of profits to various reserves. As in the case of Bowater, the market reaction to these results has been disappointing. Inveresk 2s. Ordinary units, which were recently quoted around 5s., have moved down to 4s. 41d. At this level the return is 81 per cent. less tax, which clearly reflects investors' uncertainties concerning the earnings pros- pects. In my view the dividend is so well covered that the yield makes adequate allowance for the trading risks.